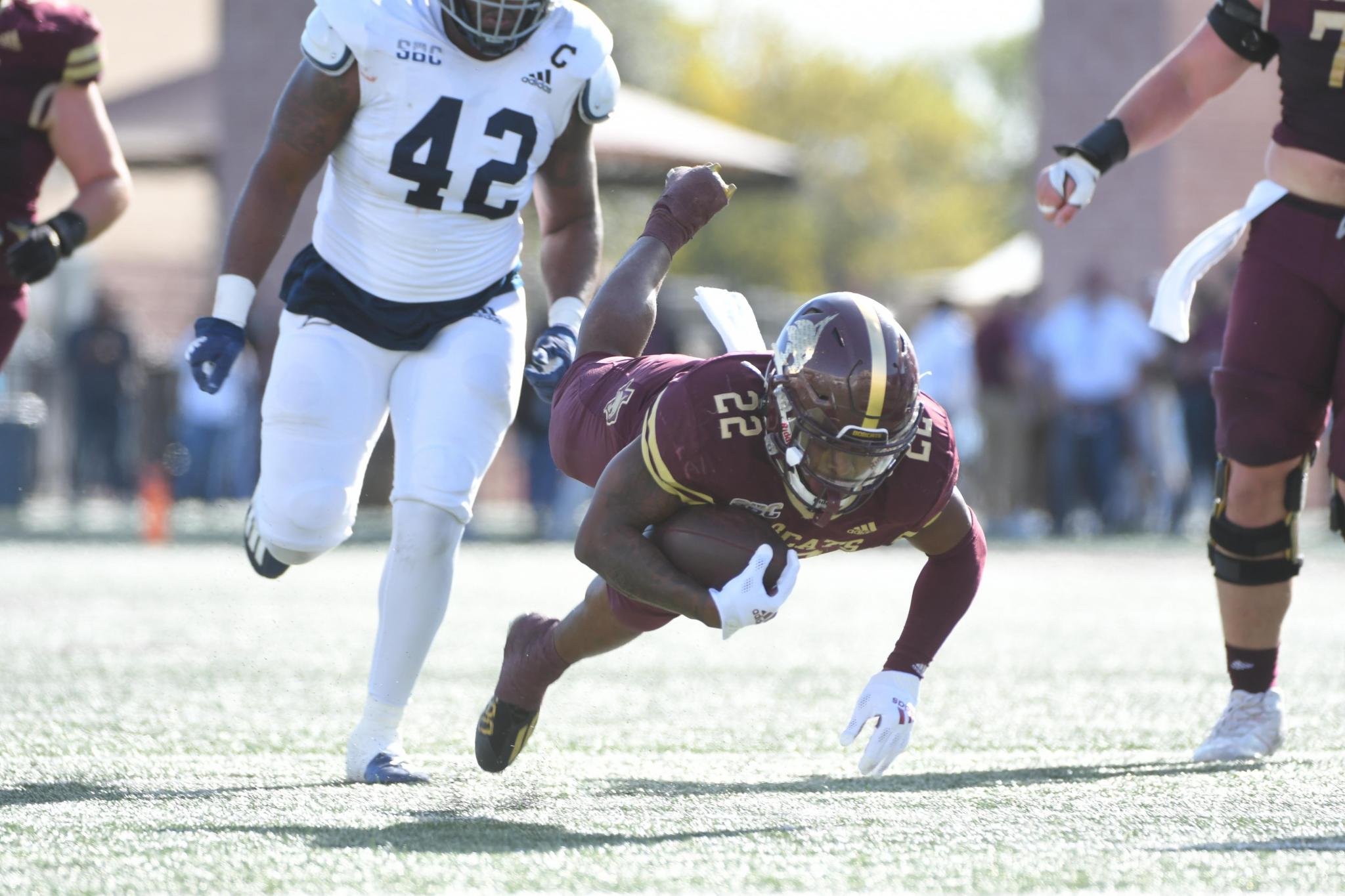 After more than half a decade of dwelling at or near the bottom of the Sun Belt Conference, and the FBS as a whole, the Bobcats finally found themselves in a better place.

Texas State always had someone to point to who was supposed to be the personification of the strides the program was making, like former linebacker Bryan London II, who broke the Bobcats’ all-time tackles record, or former offensive tackle Aaron Brewer, who was selected to the All-Sun Belt teams multiple times, or former returner Jeremiah Haydel, who ran back both a kickoff and a punt for a touchdown last season. It never amounted to anything more than two or three wins.

But on Saturday, the maroon and gold made its most significant stride in seven years. There was no individual to point to, but rather a team of them. Texas State defeated Arkansas State on the road, 24-22, to finish the season with a 4-8 overall record — the program’s best since 2014.

“I’m just proud of this team and its effort today,” head coach Jake Spavital said. “Everybody stepped up and made a play at some point. We were kind of sporadic on offense and defense at times, but in the times when we needed to make a play, someone stepped up, and we ended up coming out with a victory.”

It nearly didn’t turn out that way.

The Bobcats scored on their opening possession on a four-yard run by sophomore running back Jahmyl Jeter. Senior quarterback Tyler Vitt threw a 31-yard scoring pass to junior wide receiver T.J. Graham to punctuate the team’s next drive. Redshirt sophomore kicker Seth Keller added a 46-yard field goal late in the second quarter, redshirt freshman running back Calvin Hill crossed the goal line again in the third on a six-yard touchdown carry and the Texas State defense had mostly kept the Red Wolves out of the end zone, resulting in a 24-13 lead heading into the fourth quarter.

Arkansas State came back. The hosts scored on a 22-yard field goal at the start of the fourth and kept the visitors pinned near midfield and out of scoring range. With just over two minutes left, redshirt sophomore quarterback Layne Hatcher delivered a 26-yard touchdown pass over the middle to freshman wideout Corey Rucker, setting the Red Wolves up with a chance to tie the game on a two-point conversion. But Texas State called timeout, set its defenders up in the right spots and forced an incompletion to keep a 24-22 edge.

The Bobcats went three-and-out on their next drive, giving the ball back to Arkansas State on its own 37-yard line with 55 seconds remaining. The Red Wolves drove 32 yards in four plays and called timeout with just three seconds on the clock, allowing the game to be decided by a 48-yard field goal attempt by redshirt junior kicker Blake Grupe.

Grupe’s kick sailed into a headwind and fell several yards short of the goalpost as time expired, granting the maroon and gold their fourth win of the season.

As the ball fell to the ground, fifth-year senior defensive lineman Caeveon Patton ran to Spavital, who gave him a tap on the helmet with a grin. Patton has been in San Marcos for most of the program’s prolonged downslope, proving himself to be one of its best players over time. This season was the most successful he’s been a part of.

“It was good to see everyone still playing and fighting until the end,” Spavital said. “I have to give a lot of credit to this group. Today was just a great way to send those seniors off. That’s a great way to end the season and build momentum going into the offseason for our kids who are coming back next season.”

Spavital has an important offseason ahead of him. Expectations will be even higher for the team moving forward — the Bobcats have yet to play in a bowl game since making the leap to the FBS in 2013. Texas State had 20 players participate in Senior Day. One of them, linebacker Sione Tupou, had a change of heart and will return next season. Others who still have some eligibility left might do the same. But the team will also lose some underclassmen to the transfer portal; sophomore running back Brock Sturges and junior wide receiver Kevin Howard already announced their intentions to do so.

The head coach said with the current COVID eligibility rules, the team plans to sign more than 30 scholarship players in the offseason. And with Director of Athletics Don Coryell promising to increase the program’s recruiting budget, the Bobcats will be able to utilize travel to its advantage more than ever, sending more coaches out on the road and flying recruits in on 24 hours’ notice. Spavital said the increase will lift the maroon and gold from the lowest recruiting budget in the conference to being “competitive.”

“I’m excited to get home and get to work on recruiting and start working on the 2022 season and that team in general,” Spavital said. “But overall, I’m just happy to get the victory today for the seniors and our university.”

Texas State is scheduled to take on Baylor and Nevada on the road and Florida International and Houston Baptist at home in non-conference play and face an eight-game Sun Belt slate in 2022. It took seven years for the program to elevate itself to 4-8 and second in the league’s West Division. The Bobcats will hope it doesn’t take nearly as long to move up to the next level.

This story has been updated to include quotes from Texas State head coach Jake Spavital.