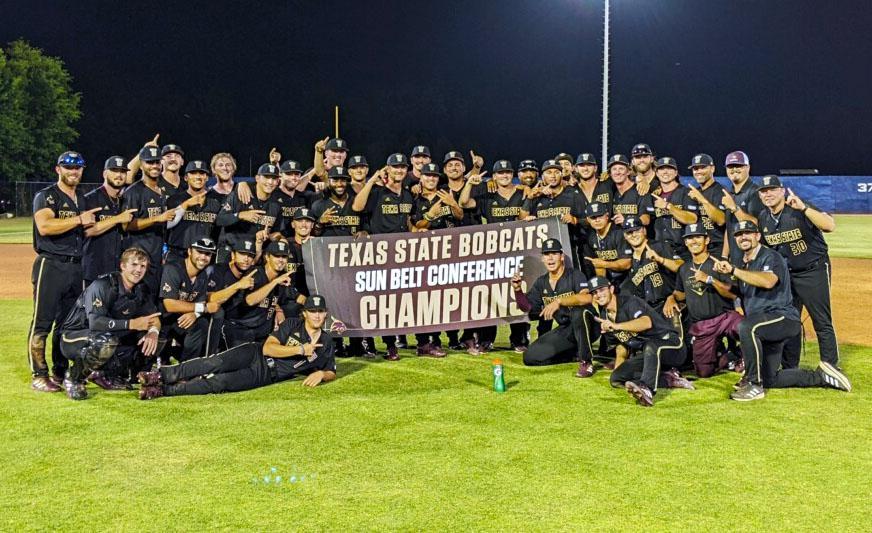 Texas State took the scenic route to get back to the top of the Sun Belt.

On May 17, 2019, the maroon and gold swept a doubleheader on the last day of the regular season against UT Arlington inside Bobcat Ballpark to earn its first-ever Sun Belt championship.

On Friday, three years and two days later, the team found itself in the place it’d been longing to return to. A three-run, eighth-inning rally helped the maroon and gold defeat Georgia State on the road, 8-7, and secure the conference regular season crown again.

The road back to title contention was lengthy and pitted. The 2019 Bobcats entered the Sun Belt tournament as the No. 1 seed but were bounced immediately, suffering two consecutive losses in the opening rounds. The NCAA selection committee named Texas State as one of the first four teams out of the national tournament, effectively ending its season.

Former longtime head coach Ty Harrington retired in the offseason and Trout, an associate head coach at the time, was promoted to lead the program. The maroon and gold entered the 2020 season looking to redeem themselves and got off to a strong start, posting a 14-4 record just before the start of conference play. The rest of the season was canceled, though, due to the COVID-19 pandemic. The team went into the 2021 season with its expectations just as high, returning most of the same roster, but struggled with injuries and adversity throughout the year, finishing at 21-36 overall and 9-15 in league play.

Fast forward to Friday night, with still two games left on the schedule, and the Bobcats had doubled their win total from a season prior, going 42-11 overall — the most victories in program history.

“It's taken a lot of hard work,” Trout said. “We thought we were off to a good start in 2020 to possibly repeat it. And then you know, last year had the struggles. And you always gotta stare yourself in the face and make adjustments, and we've done that as coaches, we've done that as players.

They were freshmen and sophomores then. They’re now two-time Sun Belt champions — upperclassmen guiding the other Bobcats through their first run as title contenders.

“They can talk the talk because they’ve walked the walk before,” Harrington said during the On the Record Sports podcast on Wednesday. “And so they understand that it’s a long, drawn-out process. They totally understand that and appreciate that. They’re not too high, not too low — even though there hasn’t been too many lows anyway.

“And so I think that experience part of it has paid huge dividends for (freshman first baseman) Daylan Pena. I think it’s been big for him to watch those guys every day. He’s evolved into a better player over time at first base. You know, he would make some mistakes at first base young in his career. Now, those older guys have gotten his attention about how those things are done. And I think the experience part of winning a championship gives you experience, but it also gives you the right to say, ‘This is how we do it,’ or ‘This is how it can be done. This is how it should be done.’”

No. 13 Texas State will close out the regular season at Georgia State, playing Saturday at 5 p.m. and Sunday at noon. The Bobcats want to reach a destination no team before them ever has in the postseason, such as winning a Sun Belt tournament championship.

After coming a long way since 2019, the maroon and gold still have farther to go.