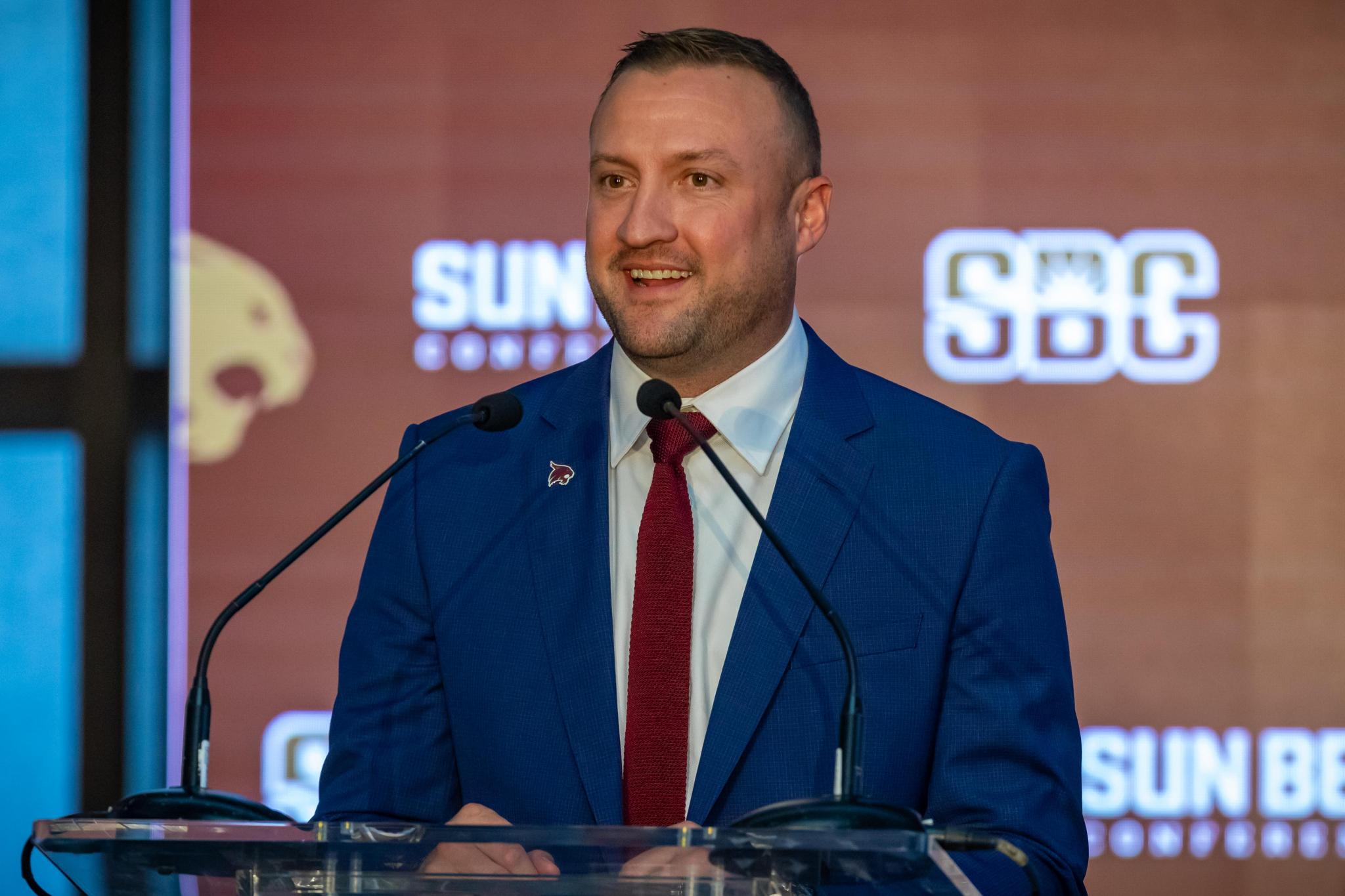 This season will be Texas State’s 10th as an FBS program, though the Bobcats don’t have a bowl appearance to show for it yet. Jake Spavital’s expectation is to change that this year.

The maroon and gold’s head coach, along with junior offensive lineman Kyle Hergel and outside linebacker Jordan Revels, discussed the upcoming season at the Sun Belt Football Media Days in New Orleans on Wednesday.

“I do believe that this is a team with a lot of depth. You know, I was looking through our numbers, we have around 80 guys that have played in college football games,” Spavital said. “We have a very experienced team right now and there’s a lot of excitement around our program. And I think there’s a lot of excitement for every school that gets up here around this time of the year but I know this is the first time where we feel that we have a good amount of depth and that we’re in a decent spot as a football program. We know we’re not playing up to the standards and expectations that we have set as a program but these guys are working tirelessly and effortlessly to put a product out there that people are gonna be proud of.”

Much of the experience of the team comes from another recruiting class made up of a large swath of transfers. Of Texas State’s 32 newcomers, 19 are FBS transfers, three are FCS transfers, one is an NCAA Division II transfer and six are junior college transfers. Just three members of Spavital’s 2022 class will come from the high school ranks.

Spavital’s use of the transfer portal hasn’t bulldozed the team’s continuity, though — among some positions, it’s actually bolstered it. For instance, the Bobcats’ offensive line returns all but one of its starters from 2021, many of whom began their college careers at a different school, including Hergel. 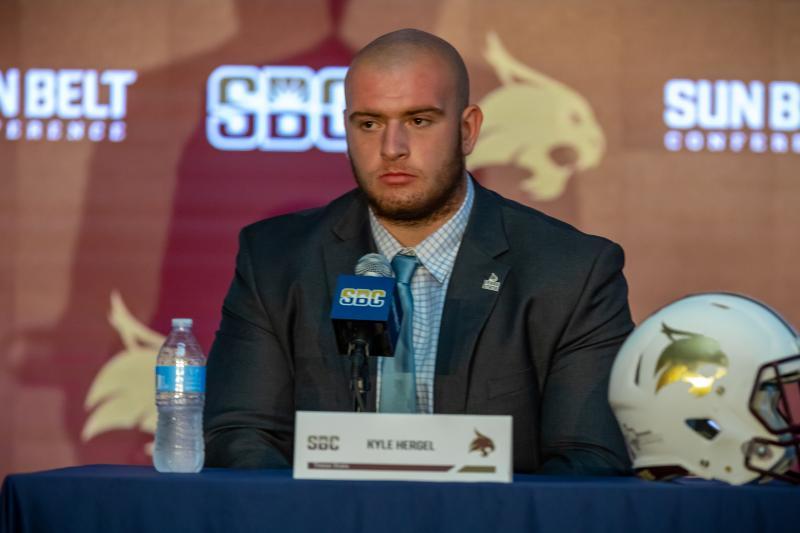 “These guys are dogs,” Hergel said. “It’s been awesome. You know, we do everything together. We’re such a tight-knit group that I like to say we’re some of the tightest on the team. We get out, we get dinner together. We hang out outside of football. It’s awesome when you have such a tight group because you play so much better and you want to play so much harder for the guy next to you and it’s a brotherhood for sure. And I think this is going to be a really good offensive line and we have a chance to do something really special this year.”

Some position groups will have tight competitions for playing time. Running backs Calvin Hill and Jahmyl Jeter combined for 1,098 yards and 11 touchdowns on 219 carries last season, but Spavital added UCF transfer Damarius Good, Arkansas State transfer Lincoln Pare and Blinn College transfer Josh Berry to the stable. The head coach thinks all five could contribute this year, but that it’ll be difficult to get everyone enough touches.

Another position battle to watch will be at quarterback, where the Bobcats will have a new starter after the departures of Tyler Vitt and Brady McBride. Ty Evans and Arkansas State transfer Layne Hatcher got a head start in the race in the spring, but Spavital added Baylor transfer CJ Rogers to the mix.

“Those three guys have done a great job already,” Spavital said. “We brought in CJ Rogers from Baylor late because I didn’t want to roll the dice going into the season with only two quarterbacks. So you bring him in for the depth purposes, but he’s actually here to compete. And I just think with how you have limited amounts of reps in fall camp this year and the tackling back-to-back, we have to amp that competition up as crazy as we possibly can early and put them in situations.

“Because when you develop quarterbacks and when you compare quarterbacks, it’s unfair to get one guy more success, especially if he’s got the (first unit) O-line and the other one’s got the (second unit) O-line. I judge off of where their eyes are and how they’re making their decisions. And then we gotta coach, we gotta put them in situations to make sure that they’re competing and then seeing who’s going to take the team down to score. So that quarterback competition is going to be pretty interesting throughout fall camp.”

Spavital said one of his top priorities for this year will be improving on third down efficiency — staying on the field on offense and getting off the field on defense. It’s something the players have honed in on, too. 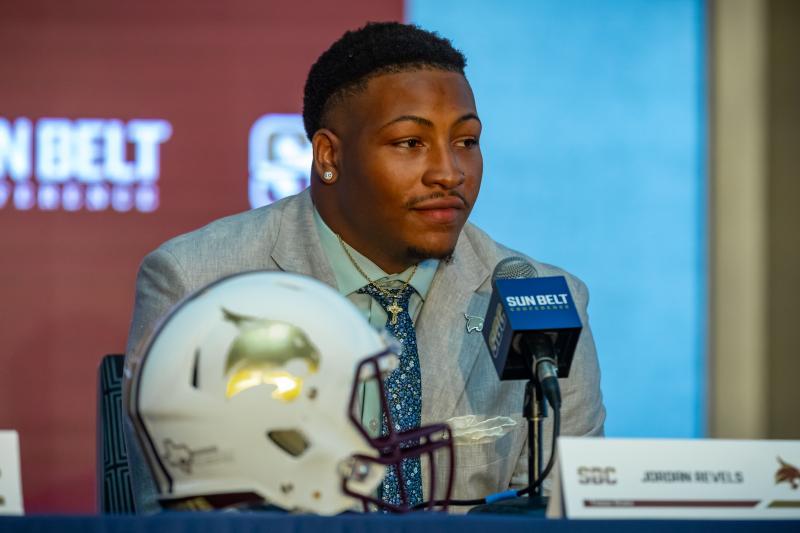 “We just realized that we didn’t have so much success last year as we wanted and we’re just going to work,” Revels said. “Everybody individually is just working on what they can do better on third down and really just perfecting our craft.”

“I do believe that our university is on the rise,” Spavital said. “You know, we have new leadership right now with our new president, Mr. President Kelly Damphousse, and then our new athletic director, Don Coryell, who has been working tirelessly and effortlessly to help support us in any possible way we possibly can. So those guys, they do a lot for us and it just shows that our university is trending in the right direction.”