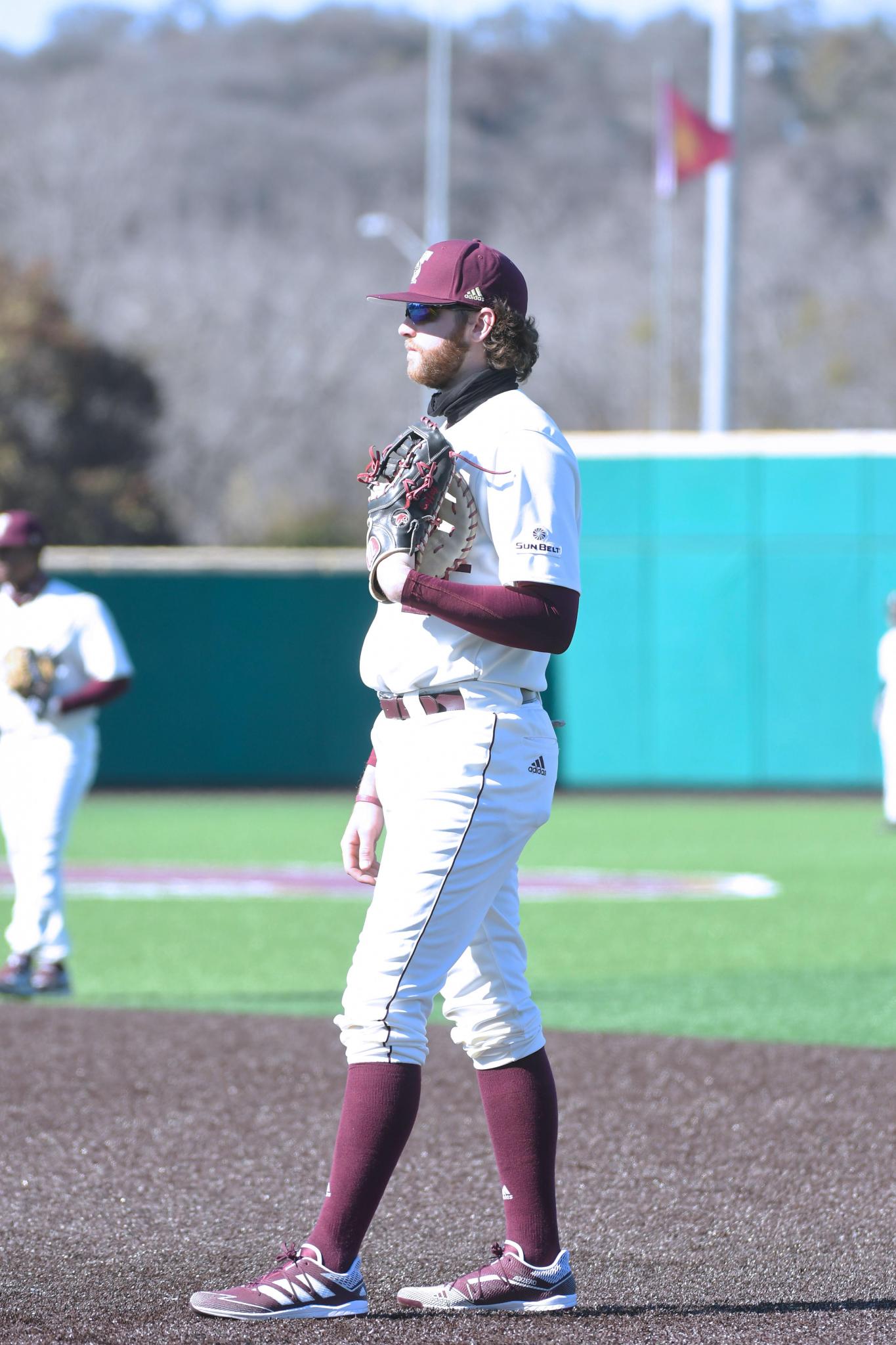 Heading into Saturday’s game against Houston, Cole Coffey was hitless.

The senior first baseman had made 13 plate appearances through seven games, drawing three walks and striking out six times. Through 119 career games, he’d only swung for home runs on two occasions.

But the wind at Bobcat Ballpark was in the batter’s favor on Saturday. Coffey, hitting seventh in the lineup, connected for his first hit of the season in the bottom of the second inning. The ball sailed over the left field fence for two RBIs.

“I knew the wind was howling out, so I was really just focused on putting good swings on balls that I knew I could get to and I knew I could handle,” Coffey said. “After the third one, all my buddies came in and congratulated me and that was awesome. It was a great feeling. And I don’t know man, it was just fun.”

The game seemed to be a turning point for the team. The maroon and gold dropped its series opener against Houston on Friday, 12-3. But earlier in the week, Texas State run-ruled No 11 TCU in seven innings, 11-1. Saturday’s game seemed to continue the trend.

Tying the series with the Cougars added pressure onto Sunday’s game. It was an opportunity for the maroon and gold to earn their first series win of the season.

But while the Bobcats scored 15 runs on Saturday, they also left 15 runners on base. The issue proved to be the team’s downfall on Sunday, as it fell 8-7 in the series finale.

The Bobcats took a quick 5-1 lead in the third inning, with a two-RBI single from junior shortstop Dalton Shuffield and a two-RBI home run from Gonzales in the next at-bat. But Houston (10-5) tied the game up in the next frame, then jumped in front with three runs in the top of the fifth.

The hosts received a defensive boost from freshman right-handed pitcher Otto Wofford, who kept the visitors off the bases through the final 4.0 innings. Texas State loaded the bases in the bottom of the seventh with one out and scored a free run after redshirt sophomore centerfielder Ben McClain drew a walk in the next at bat, cutting the lead to 8-6. But the next two batters struck out, stranding three.

The Bobcats got two runners in scoring position with one out in the final frame. Gonzales singled through the left side to score junior third baseman Justin Thompson from third, but Trout chose to prevent Hollis from reaching home from second base, keeping runners on the corners. Williams grounded into a double play in the next plate appearance, ending the game and giving Houston the 8-7 win.

Texas State (7-10) will face Rice (8-7) at home on Wednesday at 6 p.m. before beginning Sun Belt play at Little Rock (6-7) in a three-game series. Trout said he’s hoping to see his team find ways to get over the hump.

“I thought our offense came to life a little bit this weekend,” Trout said. “Even today, what an unbelievable day to hit like yesterday. So I’m just looking for guys to come out and go win a baseball game.”