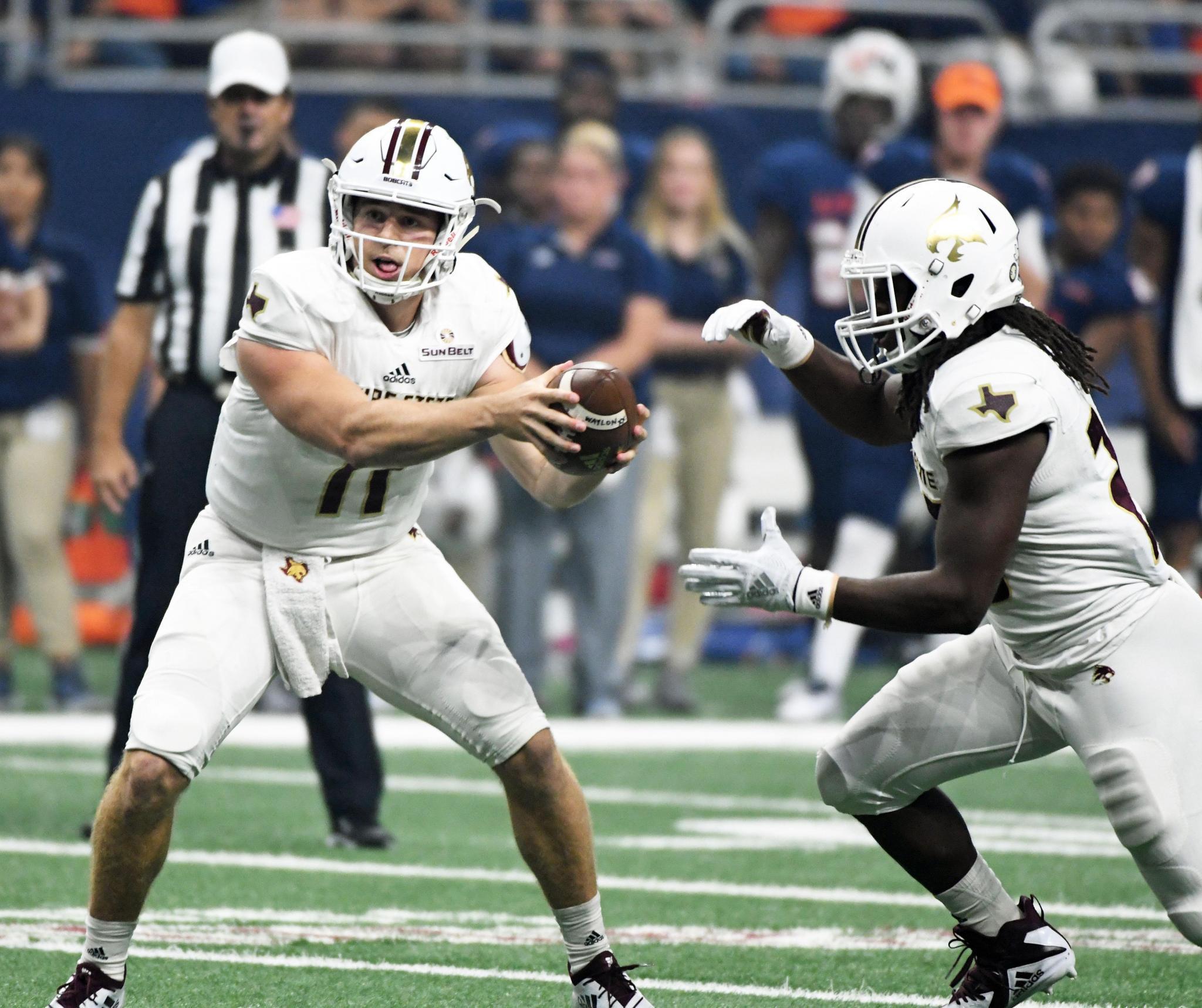 The I-35 Showdown will return in 2020, reigniting the rivalry between Texas State and UTSA after a one-year hiatus.

The Roadrunners will be coming off their season debut at LSU and first game under new head coach Kurt Traylor, who previously served as the associate head coach at Arkansas. Traylor replaces former UTSA head coach Frank Wilson, who was let go after going 19-29 over four seasons.

Traylor will inherit three quarterbacks with major playing experience. Juniors Frank Harris and Lowell Narcisse and sophomore Jordan Weeks combined to complete 211 passes on 358 attempts for 2,163 yards and 13 touchdowns while also throwing 11 interceptions. Narcisse started in the last seven games of the season and displayed dual-threat capabilities, rushing for 492 yards and four scores on 118 attempts (4.2-yard average), though he’ll likely have to re-earn the job with a new head coach.

The Roadrunners’ top offensive weapons all remain. Tight end Carlos Strickland II led the receiving corps with 492 yards four touchdowns on 38 catches, just edging out sophomore wideout Zakhari Franklin with 491 yards and three touchdowns on 38 catches. Running back Sincere McCormick had a strong rookie season, taking 177 carries for 983 yards (5.6-yard average) and eight scores on the ground while chipping in 194 yards and one touchdown on 24 receptions. UTSA also rosters proven commodities on its offensive line, such as All-Conference USA Honorable Mention Spencer Buford at left guard and Ahofitu Maka, who started all 12 games at center.

Hunter Duplessis also poses as an up-and-coming threat in the kicking game as he went 25-for-25 on extra points and 9-for-11 on field goals as a freshman, his longest make from 43 yards out.

Texas State will host UTSA inside Bobcat Stadium on Sept. 12. The Bobcats have yet to beat the Roadrunners, trailing 3-0 in the all-time series, though they came closest in their last meeting on Sept. 22, 2018 at the Alamodome. Texas State starting quarterback Willie Jones III was sidelined in the first quarter with an injury. Tyler Vitt helped stabilize the offense and found wide receiver Hutch White in the fourth quarter to cut UTSA’s lead to 23-21. But the hosts scored on a safety during the visitors’ final drive, ending the game with a 25-21 victory.

ESPN staff writer Bill Connelly's SP+ projections rank the Roadrunners 124th in the FBS, behind the Bobcats at No. 123, and predict a 4-8 season for UTSA.