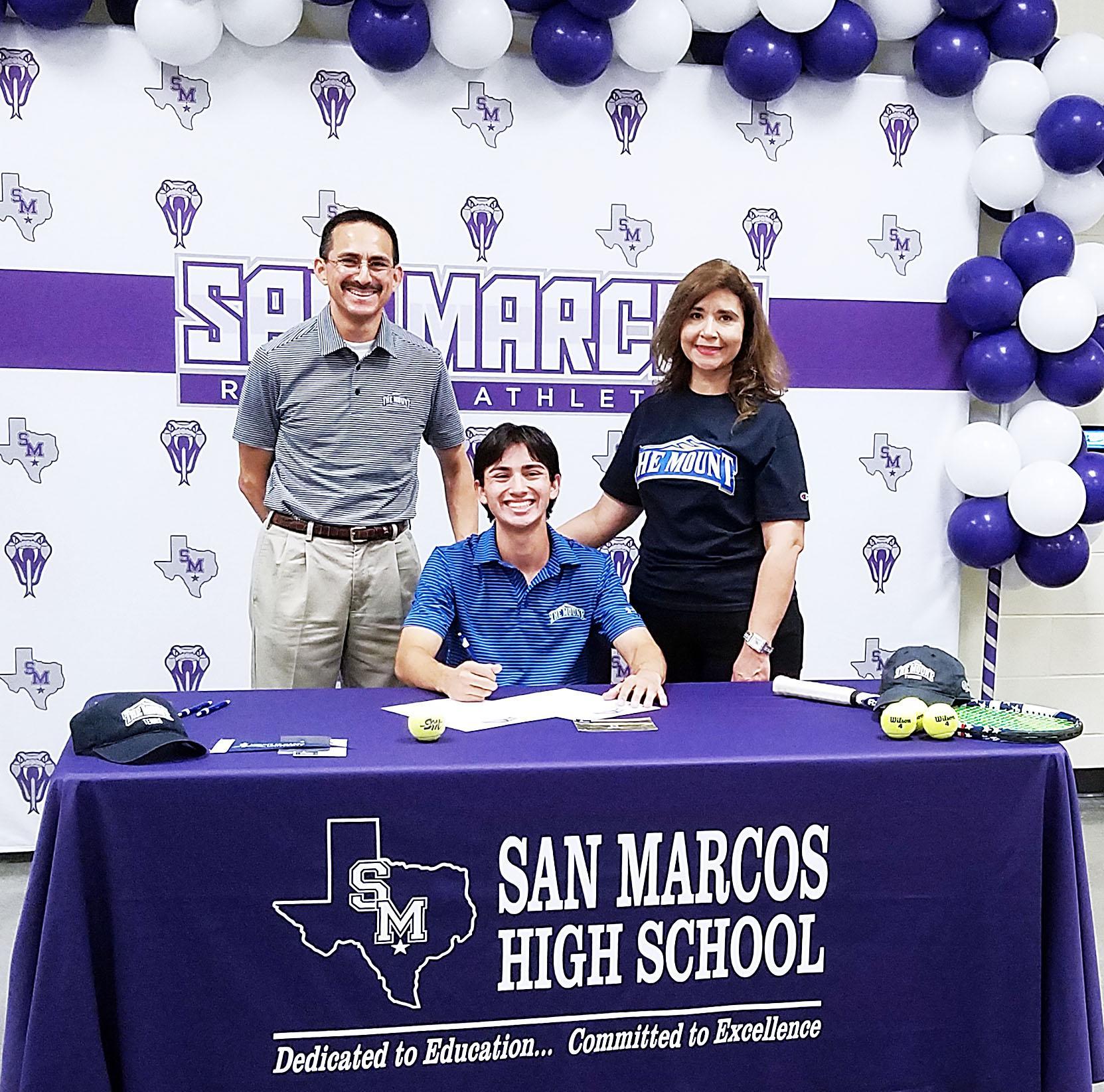 Carol and Dakota Fernandez went to Academy Sports + Outdoors unsure of what they were looking for.

Dakota was in eighth grade at the time with an open slot in his class schedule to fill. Two of his close friends, Sabrina Tankersley and Sabrina Zheng, encouraged him to join the tennis team. Dakota never played the sport and did not own any equipment, but agreed to give it a try.

Carol was advised by a friend to not spend too much. Tennis equipment is expensive, she was told, and Dakota might decide he doesn’t like the sport.

The Fernandezes left the store with a $74 Wilson racket, a fresh pair of Nikes and a new obsession for Dakota. Two weeks later, the shoes bore holes in the soles and the racket’s strings had popped. He was hooked.

“There’s something about hitting the ball correctly and just at that center of the racket that’s just an experience I can’t describe,” Dakota said. “When you make contact, it just feels so good.”

Dakota’s good at everything. His parents signed him up for a local performance of “Oliver!” when he was seven years old. He now has seven acting credits on his IMDb page. He’s a trained actor, singer and dancer. He’s in the top six percent of his class, a Life Scout and a member of the San Marcos High School Student Council and National Honor Society. His mother jokes that he should get into politics.

Confidence comes naturally to him. Fernandez first saw San Marcos head coach Michael Martinez at a camp in 2015 the summer before his freshman year. Fernandez went to introduce himself.

Martinez was skeptical, of course. Even more so after he saw Fernandez play.

“You watch him hit and there’s a lot of work to get done with this kid,” the coach said.

That’s probably what Dakota liked the most about tennis, though. It challenged his confidence. It didn’t come natural to him. He had to work for it.

He described himself as a brat his first few years on the team. He’d throw John McEnroe-esque tantrums on the court, tossing his racket around as if it didn’t cost $15 a pop to restring it.

Some of the tantrums were warranted. Fernandez was facing opponents who started playing when they were as young as three years old. There was no substitution reps. Even if he was on an even playing field, physically, his inexperience put him at a disadvantage.

But his struggles made him want to succeed even more.

“I was gung-ho about tennis from day one,” Fernandez said. “I know I got on everyone’s nerves, especially the seniors. I said, ‘Y’all guys can count me out, but I’m going to state. I’ll be playing college tennis, I don’t care what you say. I don’t care if you can ace me a hundred times, I’m gonna make it to state.’”

Fernandez might have said it tongue-in-cheek at the time, but he started to believe himself more as he entered his junior year. Sam Chadwell, the head coach at Calvary Baptist Academy New Braunfels who restrings Fernandez’s rackets every three weeks or so, noticed the strings always seemed to pop in the same place.

It showed that Fernandez was getting consistent. Martinez noticed it on the court and moved Fernandez to his No. 1 spot on the team, pitting him against other schools’ top players.

“He was our captain,” Martinez said. “He was the persona that got us hyped up at the beginning of a match. (He) came up with his own chant, got all the kids to do it.”

Fernandez realized he wanted to pursue the sport. Once, he and his father, Mark Fernandez, traveled to the Caswell Tennis Center in Austin to watch Texas face Tulane in the round of 32 of the NCAA Tournament on May 13, 2017. Dakota felt inspired as he watched the Longhorns grind out a 4-3 win.

True to form, he approached then-head coach Michael Center after the match.

“Hi, I’m Dakota Fernandez. I’m going to come play for you one day.”

Dakota soon learned the harsh realities of recruiting. He sent an email to Center soon after the match. Center never replied.

Neither did most schools he reached out to, mainly due to his Universal Tennis Rating (UTR). Novak Djokovic, Rafael Nadal and the other bests in the sport boast a UTR of 16 or better. Dakota’s typically hovers right above a 5.

“We had Division I schools say ‘Unless you’re a 12, don’t talk to us,’” Mark said. “All the schools in the south are really hard to get into because that’s where everybody wants to play.”

Dakota set out to prove them all wrong. If he couldn’t join them, he was going to beat them.

He watched the highlights of legends like McEnroe, Pete Sampras and Andre Agassi. He played in United State Tennis Association tournaments outside of school and moved up the ranks to Champ status. He began training at the John Newcombe Tennis Ranch — Newk’s for short.

But Dakota proved to be worth the investment. One day during his senior year he got a hit on his Next College Student Athlete page. It was from a Division I school called Mount St. Mary’s. Dakota reached out to the head coach, Barrett Elkins. Surprisingly, Elkins replied back, with interest. A few messages later, Fernandez was invited out to Emmitsburg, Maryland.

Dakota and Mark stayed for a weekend in late January. Dakota spent both nights with the team.

“The campus was extremely small and the team was a really close-knit group of guys,” Fernandez said. “And saying that they were like a brotherhood is an understatement for how close they were.”

Fernandez made his commitment official on Monday, signing his letter of intent with the Mountaineers inside the Student Activity Center at San Marcos.

He never won state like he told Martinez, fracturing his hand during a practice in his final season with the Rattlers. He didn’t join the Longhorns as he told Center, though he was accepted to the university as a student.

But he’s still as confident as ever. It comes from knowing how proud he’s made his parents. They’ve always been proud, so he’s always been confident. And though he might not reach all of his new goals at the collegiate level — to become a team captain, to make the NCAA tournament and win the championship — he’ll always be ready to make an introduction.