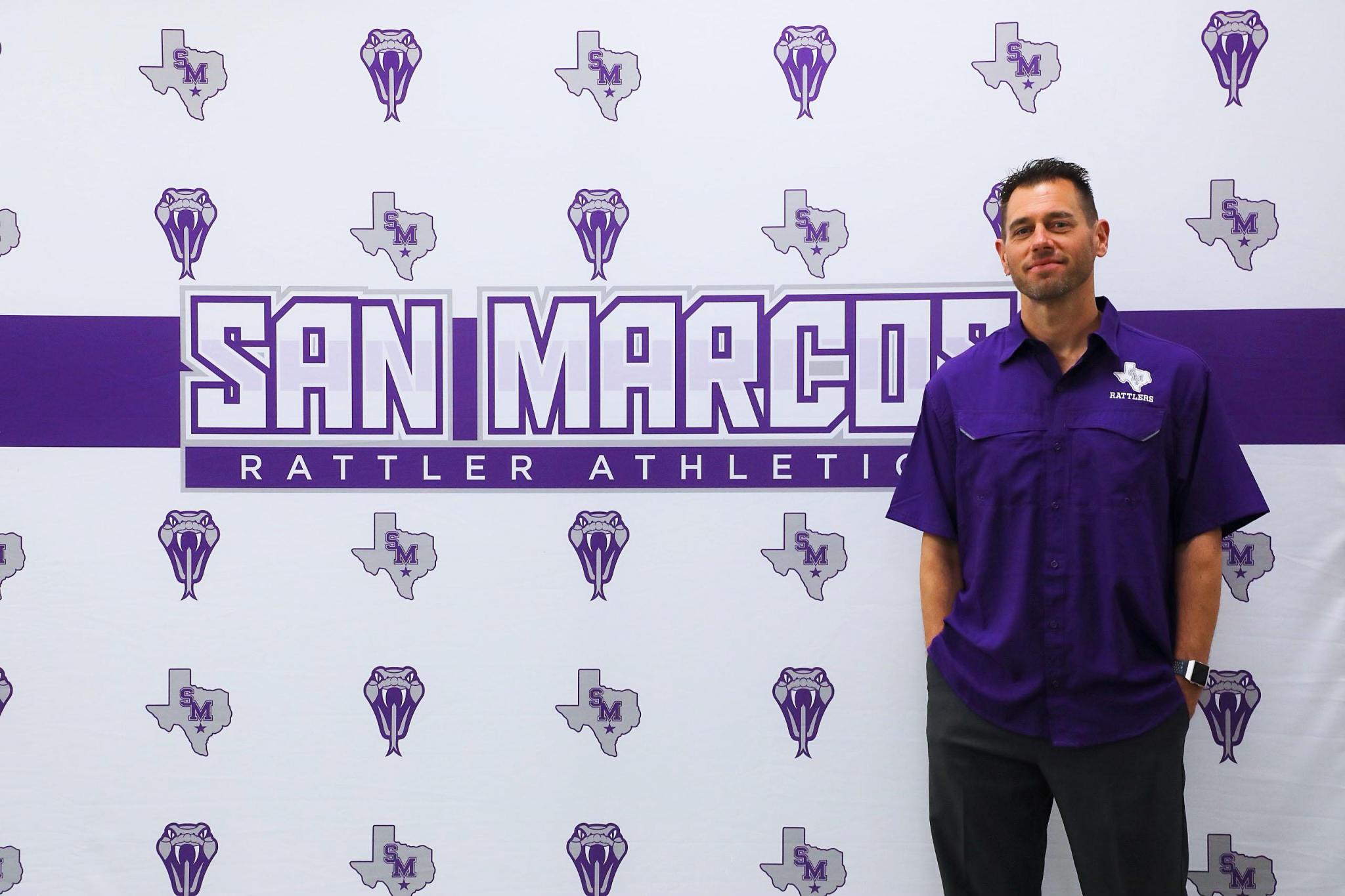 Originally from Brillion, Wis., Dan Miller is a firm Green Bay Packers fan. On the other hand, a lot of his family cheered for their division rival Minnesota Vikings and its bright purple uniforms. Miller admits he hasn’t worn a lot of purple due to the simple fact they rival his city’s team, but in a new scene he will have to wear it with pride.

He’ll be rocking Rattler purple as he was introduced as the new head coach of San Marcos boys’ basketball team on Monday. The coach makes another stop at the high school level having previously coached at LeTourneau University and before that Seven Lakes High School.

His new opportunity comes just two years after winning the first American Southwest Conference in LeTourneau’s history. The new San Marcos coach was named American Southwest Conference East Division Coach of the Year in 2016-2017 and 2017-2018 and was honored with the National Association of Basketball Coaches (NABC) South Region Coach of the Year in 2018. His success often makes it tough to leave.

“I'm gonna miss my guys at LeTourneau, I love those guys. It was the hardest part,” Miller It was the same thing when I left Seven Lakes. I love those guys, too but that's part of the coaching where you feel like you left the place better than when you came. I feel like the place is in very good hands. God called us for our next step and our family is excited about this adventure. We’re ready to roll our sleeves up and get to work and get plugged in the community and do some great things here.”

Miller comes into the program as the winningest coach in LeTourneau’s history and was able to flip the team from the worst scoring offense in his first year to a conference-leading 94.7 points per game in the 2017-2018 season. His teams also led the conference in blocks and 3-point defense during his tenure with the Yellow Jackets. His main goal at San Marcos isn’t to just build up the varsity team but to build a winning program across the school district, starting with middle school, up to the best player on his varsity squad.

He believes that a championship mindset has to be instilled from a young age in order to build a winning culture. At Seven Lakes, he and his staff kept depth charts of players on all teams to track their progression throughout the season and meet with his players on how they could improve.

“Winning from the start at all levels. We want to have successful teams and you don't just do that by saying that we do things the right way, from the way we practice, the way we compete. But we want to instill a championship expectation, we want to eventually be the standard program. So to do that, though, talk is one thing and it's about our action. So we're ready to get to work and just have great practices, have great work ethic, play smart, play tough, play together. But instill a great togetherness that just permeates right through our program as a brotherhood.”

San Marcos has a lot of time to prepare for a playoff run next season, but the Miller era officially gets underway April 19, the day of the team’s first spring workout.

“Be ready to watch some great basketball. You know, be ready to be in the gym and make it a gym that's a loud gym and get behind this team. Get behind all our teams,” Miller said. “I think you're gonna like what you see — a team that plays defense, plays extremely hard defense. A team that shares the basketball, a team that plays smart and has a winning formula and just having fun doing it the right way. I’m just excited to be here in Rattler Nation and we appreciate the hospitality.”