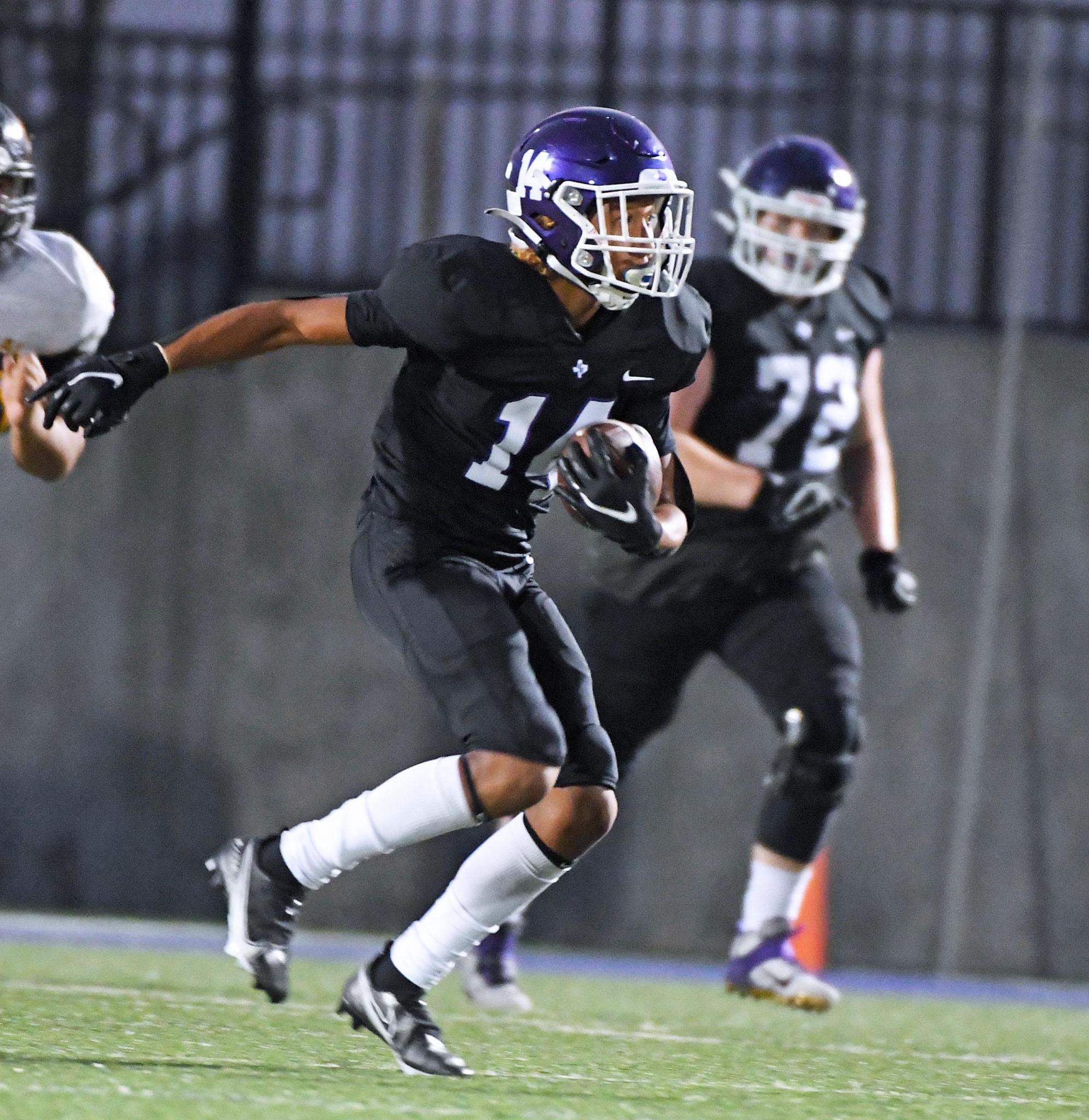 You don’t normally see players tell their head coaches what they should’ve done in a certain situation. Especially sophomores with no varsity experience.

Originally, the coaching staff at San Marcos told wide receiver Tony Diaz they would keep the sophomore on junior varsity in order for him to get more reps in. His playing time on Friday nights with varsity would mostly end with a clean, untackled jersey but he’d get valuable learning experience on the sidelines. That’s exactly what Diaz’s first weekend of the 2021 season looked like in San Marcos’ 49-30 loss to New Braunfels on Aug. 27.

In the same game, star senior receiver Jamil Gordon went down with an injury in the first half of the game. During halftime, head coach John Walsh put all pride aside and told Diaz his tenure on JV came to a quick halt.

“When he came over and told me, I was just very shocked at first,” Diaz said. “I was just like, ‘Wow, that just happened.’ And it was like the snap of a finger and it was time to play the next week.”

His shock turned into major production from the beginning. In his first varsity start, he posted five receptions for 158 receiving yards and two touchdowns, lighting up the eyes of his coaches and teammates against San Antonio Holmes. Wide receiver coach Marvin Nash knew Diaz would be a stud way before he even was thought of as a football player.

“I've always had the mentality that you find hoopers and you turn them into playmakers,” Nash said. “So here's a hooper. I saw him on the court first. He’s running around, crossing people over and I'm just saying to myself, ‘It’s the same steps. So, with him being able to make that translation from the court to the field, it's just nothing less than remarkable, especially at the varsity level. But his route running is elite and that's no exaggeration. He’s able to get open against anybody just because he's dedicated to setting up his cuts and finding the open spots in the defense.”

His top-tier route running was exemplified by his second-ever touchdown in a Rattler uniform. Diaz shifted his defending corner with a slant-and-go or “sluggo” route, giving him time to find a gap in the defense. Diaz caught it at about midfield and sped off into the end zone for his second touchdown of the night.

In his second varsity performance he mirrored his 5 catches from his previous game going for 88 yards leading the team in receiving for the second week in a row. Walsh even recalls a time Diaz told him he should’ve made a different play call for the sophomore.

“I called a play, I said ‘Man, I should’ve called something for Tony,’” Walsh recalled. “And he was sitting right there and he looked at me like, ‘Yeah, you should’ve.”

Saying something like that to your coach could backfire in many ways but Walsh likes the confidence in his sophomore.

“I was confident I can win most jump balls,” Diaz said. “I’ve got good hang time and I’m good at timing the ball in the air so I think I can get any of those jump balls the coach draws up. I’m just confident in my abilities out there.”

The comment caught his head coach off guard but in a good way.

“This dude thinks he’s a dude and you can’t be a dude unless you think you’re a dude,” Walsh thought to himself.

He’s definitely has become one of the dudes he thought he was. Since reaching varsity, Diaz leads the team in receptions (13), total receiving yards (276) and receiving touchdowns (two). He’s also averaging 92 receiving yards per game and 21.2 yards per catch.

“We brought him up and with intent for him to have a role, and he made that role get real big in a hurry,” Walsh said.

Walsh has already found a former player of his that Diaz’s game emulates — former Denton Guyer receiver Josh Stewart. Stewart played three years for Oklahoma State from 2011-13 where he tallied 180 receptions, 2,208 yards and 12 touchdowns in his career. During his sophomore year, he recorded 101 receptions which was third best in the Big-12 that season. Walsh said in his time at Guyer, Stewart was another undersized receiver with elite route running ability fighting to get on varsity as a sophomore. Sounds familiar.

Stewart signed as a free agent to play for the Tennessee Titans in 2014 before tearing his Achilles tendon. Diaz has some work to do to catch up but his production at this level has caught eyes the same way Stewart did.

“Tony has two things that are superior at his age. One of them is instincts,” Walsh emphasized.  “You know, you can coach and teach at the high school level, sometimes you have to teach everything to a kid to get him to the varsity level. With him, you can tell he's played a lot of backyard ball, he's played a lot of organized ball, he's got natural instincts of how to get open, how to stem his routes, and really — you know, we usually protect the sophomore into formation in plays. He can do it all, which is, which is a credit to his IQ. The second thing is, he's got top-notch high school ball skills, period. I mean, his dexterity, his hand-eye coordination is at an all-time high for a sophomore.”

Diaz and the Rattlers take the field after a week-long hiatus from district play. San Marcos hosts Austin Westlake at Rattler Stadium on Friday, Oct. 1 at 7:30 p.m. With Gordon returning to the lineup from injury in the upcoming weeks, the duo should make it tough on opposing defenses and Diaz only plans on getting better — not only for his personal success, but the team’s.

“I think I could contribute by fitting into the team, like whatever they need me to do. I'll do it and I’ll do it 100 percent,” Diaz said. “The season for me is going good, but I think I can get better for sure. I realize that I'm only a sophomore, I think my peak years are coming soon.”