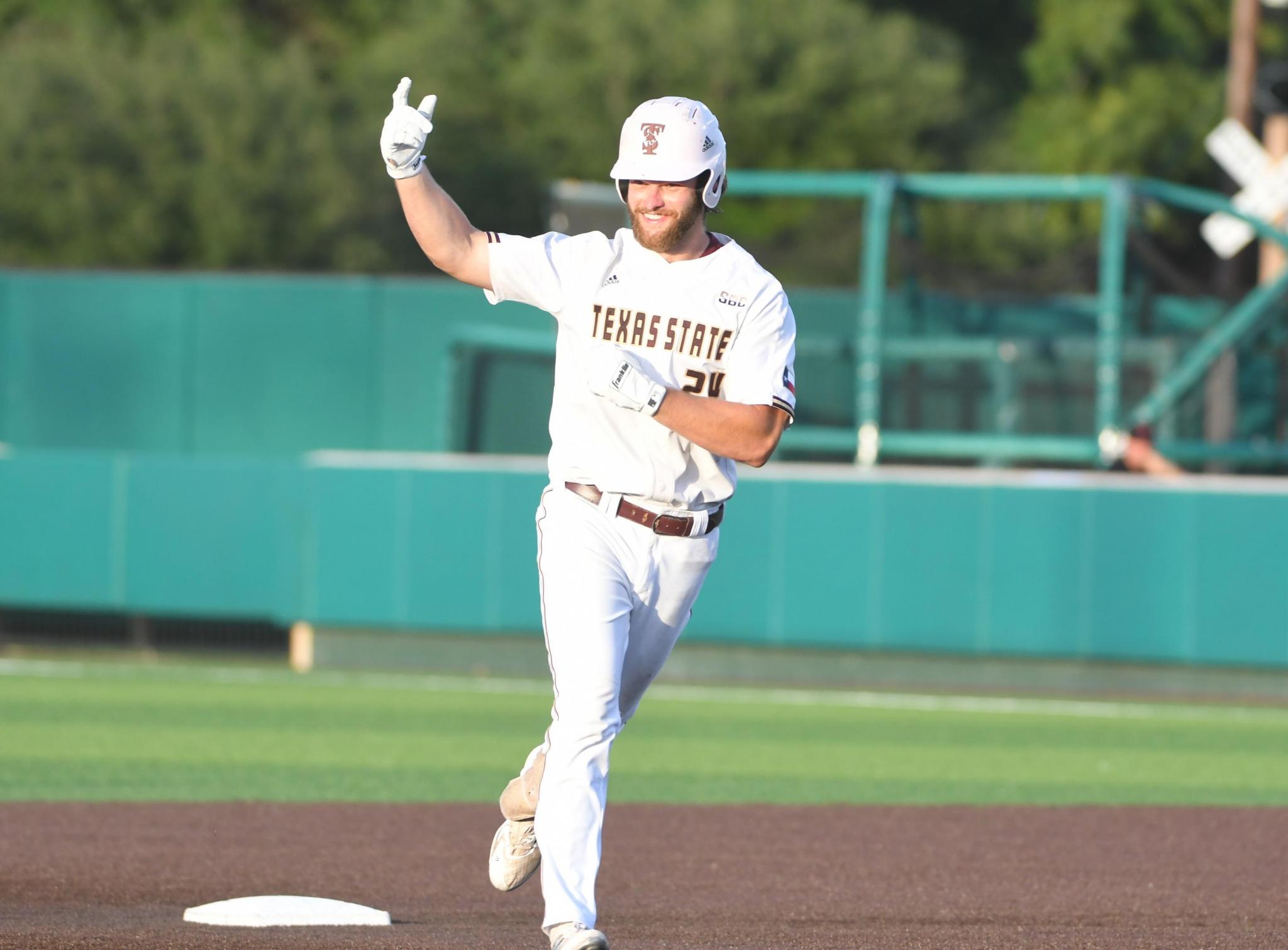 It was nearly a perfect night for Wesley Faison.

Texas State’s senior designated hitter demolished pitches all night, tallying two doubles, two home runs and four RBIs on Friday in a 7-5 win over Louisiana inside Bobcat Ballpark. It was the latest in what’s been a string of dominant hitting performances by Faison.

The Richmond native got off to a solid start to the year at the plate but hit a slump in the middle of the season, his batting average troughing at .200 after an 0-3 performance against Appalachian State on April 1. Faison’s since found his rhythm, though. In the previous 10 games before Friday night’s matchup, he’d hit 11-28 with 10 RBIs.

Head coach Steven Trout knew his team would be going up against Louisiana senior left-handed starting pitcher Brandon Talley to begin the series against the Ragin’ Cajuns. Trout typically slides senior leadoff hitter Ben McClain out of the lineup against lefties and inserts senior outfielder Isaiah Ortega-Jones into the nine-hole, which moves most of Texas State’s hitters up spot.

But given Faison’s recent play, Trout decided to roll with the DH as his cleanup hitter on Friday — something Faison hadn’t done since March 12.

The decision immediately paid off. Senior shortstop Dalton Shuffield led the game off with a single down the third baseline, senior third baseman Justin Thompson followed it up with a walk and both players stole a base to put two runners in scoring position. Junior left fielder Jose Gonzalez struck out in the next at-bat, bringing up Faison.

After falling behind 1-2 in the count, Faison crushed a ball over the left centerfield fence for a three-RBI home run.

“I was little surprised, honestly, with the lineup card at the beginning of the game,” Faison said. “But Trout told me to be the guy tonight and be the guy in the four-hole and just driving runs. And I thought I did a decent job at it, so hopefully I'll stick around there for a while.”

Faison added a double to centerfield in the bottom of the third inning and advanced to third base on a wild pitch, but was thrown out at home plate on a fielder’s choice. He was back at the dish in the fifth, though, sending a solo home run to right centerfield. Senior second baseman Cameron Gibbons added an RBI single in the frame to extend the maroon and gold’s lead to 5-0.

Louisiana got the better of Texas State junior starting pitcher Zeke Wood in the top of the sixth, scoring four runs before Wood was relieved by junior right-hander Triston Dixon. Shuffield countered with a solo homer to right center in the bottom frame to push the Bobcats back up by two. Faison added one more double in the half-inning but wasn’t advanced any further.

“The crazy part is, he's becoming a better hitter,” Trout said. “He's starting to use the middle of the field more. He's not just a one-dimensional hitter of hitting the ball to left field and hitting it out. He's hitting balls to center, hitting balls out to right. Even this weekend at Monroe, he was taking big-time swings in all parts of the field. And so he's just on time right now and using all parts of it, so it's been fun to watch.”

The Ragin’ Cajuns trimmed the lead back down to one with a run in the top of the eighth, but Shuffield led off the bottom frame with another longball, tying Faison’s two for the game. Senior closer Tristan Stivors retired the side in order in the top of the night to clinch the 7-5 victory.

Faison went 4-5 on the night, followed by Shuffield, who was 3-5 with two RBIs. The two share a house with senior right fielder John Wuthrich and the trio of Bobcats now all have double-digit home runs this season — Shuffield and Wuthrich with 12 each and Faison with 10.

Wood (6-1) received the win, surrendering four hits, one walk and four runs while striking out two in 5.2 innings. Stivors picked up his 13th save of the year, tying Pasquale Mazzoccoli (2016) for the program’s single-season record.

“This is gonna be our last weekend series in San Marcos, so we've been talking about going out with a bang and just making the most of it,” Faison said. “And I feel like we did that, helped the team win tonight, so it was a good feeling.”