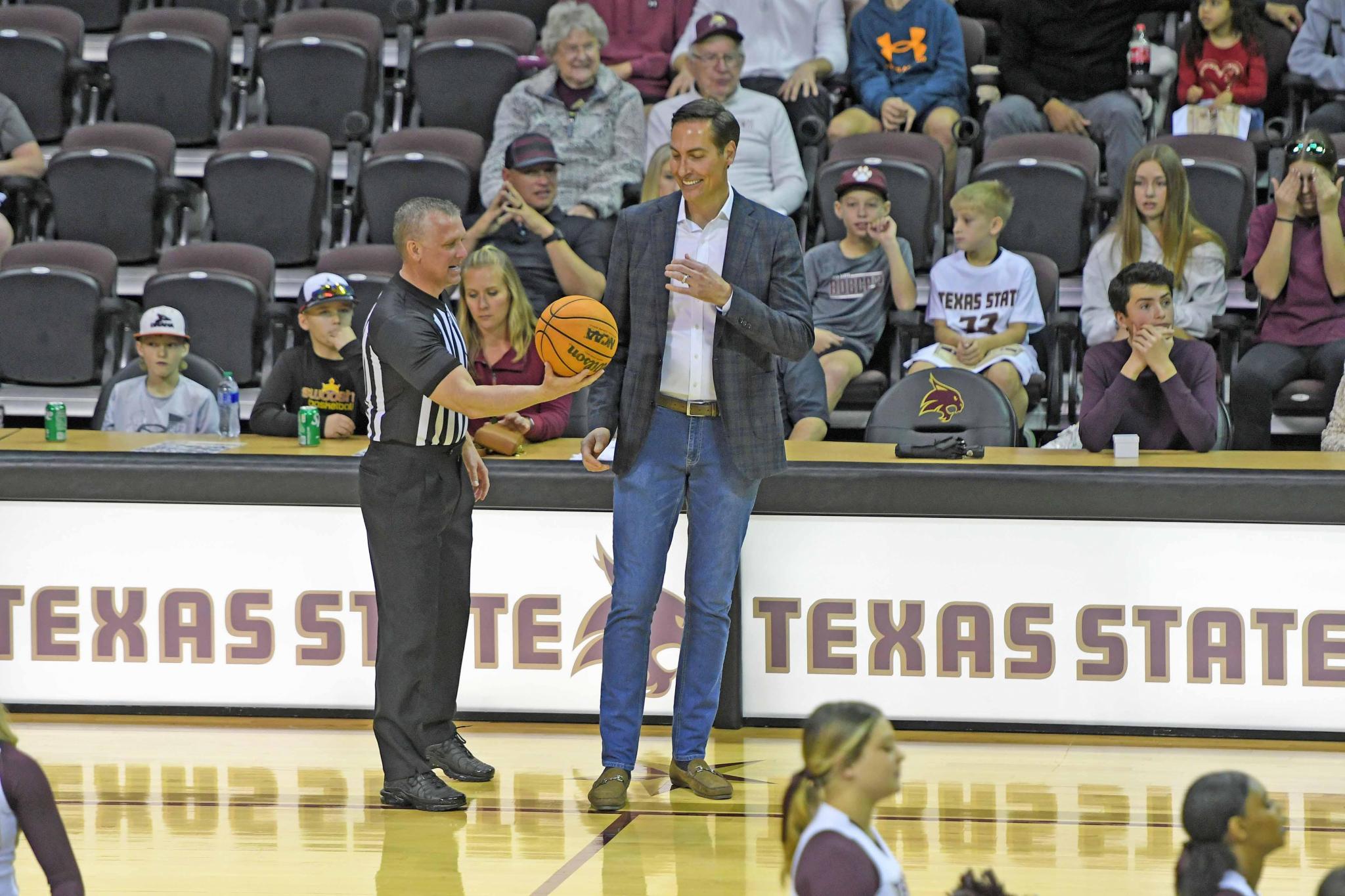 The 1996-97 Southwest Texas State men’s basketball team was honored during Texas State’s game against Louisiana on Saturday. Longtime Bobcat great Jeff Foster (pictured above) had the basketball court dedicated in his honor. Below, the 96-97 SWT team is honored at Saturday game inside Strahan Arena. Daily Record photos by Gerald Castillo

It was a special day on Saturday with not only the 1996-1997 Southwest Texas State basketball team honored but Texas State also officially dedicated the basketball court in honor of longtime Bobcat great Jeff Foster.

While Foster was happy that Texas State was giving him such a huge honor, Foster was more excited about reuniting with his teammates.

“It was obviously a special moment for me and my family,” Foster said. “It’s also special to me that we are honoring the last NCAA tournament team. This was the first time as a group that we have been back together in 25 years. It’s been a wonderful 24 hours with those guys and it was special to have them with me as the name was unveiled. I’m really appreciative of Texas State.” 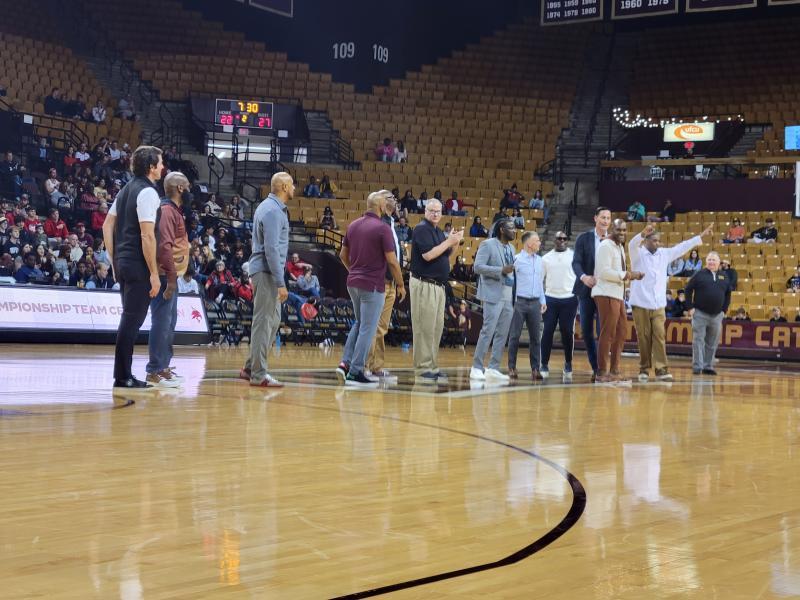 As the team came together, it was also an opportunity for the older team to connect with the current generation of Bobcat players.

“It’s hard to put into words,” Foster said. “We have seen each other individually but coming together as a group while also having the current team present was special. Coach TJ and his staff have done a great job over the past couple years. With the current gap being 25 years, it was nice to see this year’s team see the past team and see that long duration so that the next Texas State can make that jump.”

Head coach Terrence Johnson was happy that his team was able to share this special moment with Foster and his team considering how much Foster has given back to the university.

“It was certainly a special night,” Johnson said. “Jeff is a great ambassador to our program while being a great person and great player in his own right as a hometown hero. It was amazing to do through the festivities over the last 48 hours. He is so deserving of it and he is such a selfless person that he wanted to share this with his teammates while understanding that without them there is no him. That is something we can learn from him and what he embodies every single day.”

Foster said what made the 1996-97 team so special was the ability to come together when things got tough while also finding the right momentum at the right time.

“We were a team that was picked to be in the middle of the pack,” Foster said. “We just grinded and played hard. We didn’t trust each other early on but with us bleeding and fighting together, we gained mutual respect from one another while turning that aggression and will power onto our opponents. Just like I hope with this current team, if you are playing well at the end of the season, it tends to translate into really good things. We got hot and gelled at the right time. When you win the conference championship and go to the NCAA Tournament, it’s a lifelong bond that can never be extinguished.”

The shared brotherhood between the players on the championship team is another lesson Johnson looks to teach to the Bobcats.

“The team can learn just that,” Johnson said. “The fact that when you can do special things together, you will come together even if you haven’t seen them in 20 years. They will still be brothers and teammates. But that only happens to the ones that do special things so the lesson is right there within itself. When you seize the moment, it becomes a memory and a brotherhood that will last a lifetime.”

Some of those lessons are already taking hold with senior forward Tyrell Morgan.

“Honestly, just standing there together no matter what happens,” Morgan said. “We faced a ton of adversity this year so pretty much it’s about sticking to it while also working hard.”

“One thing we can learn is seeing those guys still be together and connected,” Mason said. “We just want to be the same. When adversity hits, connected teams do well so we have to stay connected through it all.”

“I definitely knew a little bit about him, especially with him being from San Antonio,” Mason said. “Seeing all that he has done for Texas State and the community itself is really inspiring. I want to be able to do something like that when I’m older.”