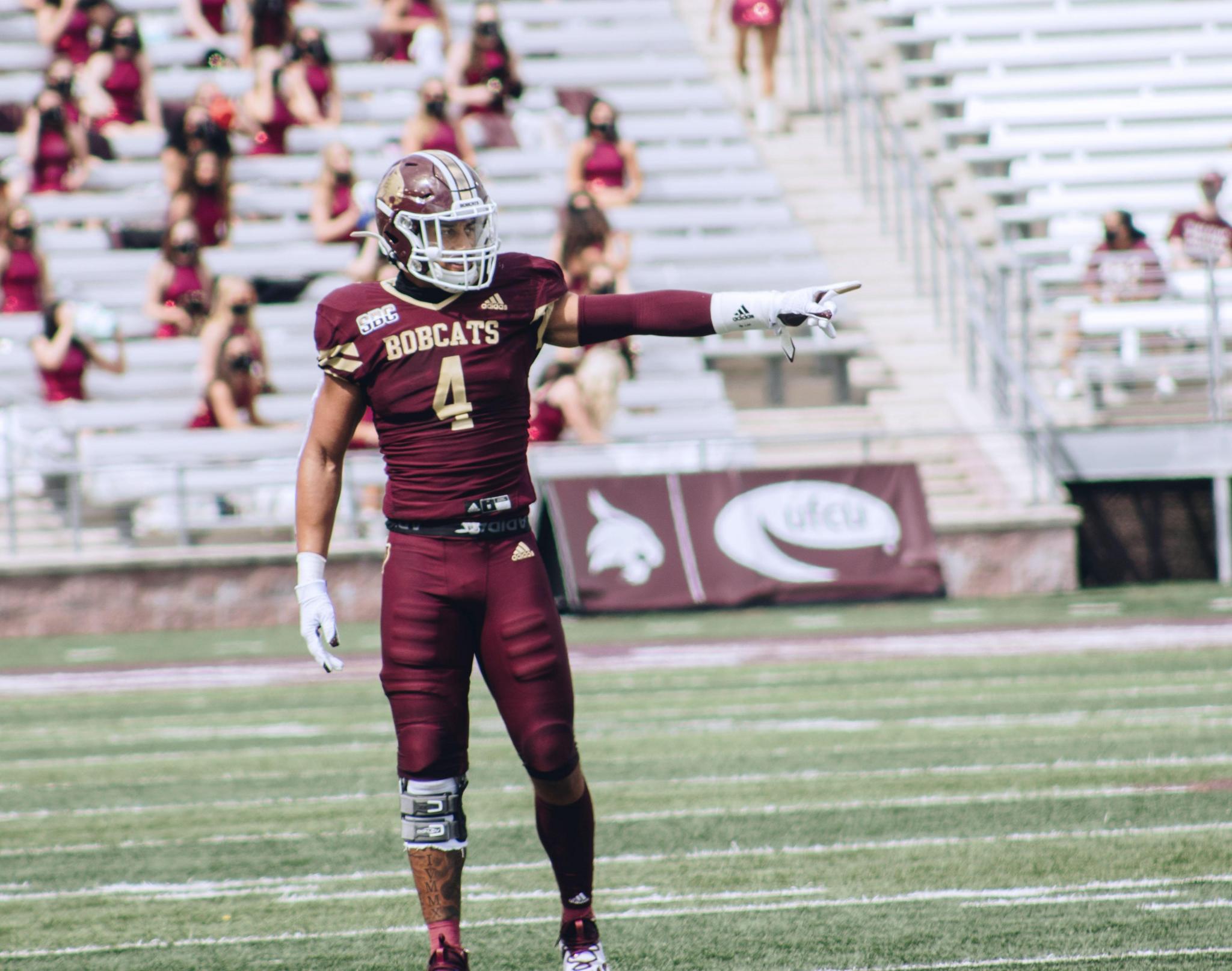 Gavin Graham (above) has become one of the most vocal proponents of social justice on campus and one of the fiercest defenders on the field at Texas State. He takes after his father, William (below, No. 33), in both respects. Above, photo courtesy of Texas State Athletics. Below, photos courtesy of William Graham

After a brisk one-mile walk from the J.C. Kellam Administration Building to Bobcat Stadium on June 11, a crowd seated in the west side of the stadium made up of Texas State administrators, coaches, players and local law enforcement waited to hear Gavin Graham speak.

“Today we marched in unity with some people that many of us are terrified of,” Graham said.

Earlier in the week he joined Bobcats head coach Jake Spavital, redshirt sophomore quarterback Brady McBride and senior defensive lineman Caeveon Patton in a face-to-face meeting with a few of the officers present for the march. Graham realized it was the first time he’d had a conversation with an officer outside of somebody his parents knew.

Graham said the officers talked about their childhoods, upbringings and experiences they had gone through in their lives. The stories weren’t that different from his own.

“I encourage you after this event is over to take time to speak with the men and women of law enforcement that joined us today in seeking true change,” Graham told the crowd. “We must find ways to have constructive dialogue and work with each other. We must all hold each other accountable, both civilians and law enforcement.”

Graham has become one of the most vocal proponents of social justice on campus and one of the toughest defenders on the field at Texas State. The graduate senior defensive end is currently tied for No. 17 in the FBS and fourth in the Sun Belt with 28 total tackles. On Sept. 14, he was named a student-athlete chair for the Community Policing and Relations department of Texas State’s Dr. Johnny E. Brown Committee on Racial Equality.

He takes after his father in both respects. 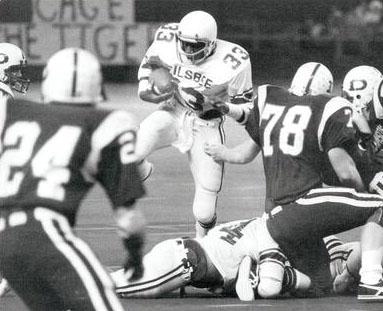 William Graham was born in Greenwood, Mississippi, in 1959, and later moved to Silsbee when he was six years old. He grew up during the civil rights movement of the 1960s in communities still upholding some of the South’s confederate ideals.

William remembers having to go through back doors to enter buildings. The public pools did not permit young Black boys, so William and his friends had to swim in snake-infested creeks and ponds instead.

His two older brothers would sneak out of the house to take part in protests and marches. At night, William would watch news stations report on cross burnings that happened in places like Jasper, Lumberton and Vidor.

“We had an all-Black school in Silsbee called Waldo Matthews (High School),” William said. “It was rumored that the (Ku Klux Klan) got mad for some reason and burned down the Black high school. Well, that wasn’t very smart because then the Blacks had to go to Silsbee High School. You had to integrate. It’s like, they didn’t think that out. They didn’t want us there, why would they have burned down the only school we had?”

Football was William’s escape. Things at Silsbee weren’t perfect by the time William got to high school, but the coaches at least didn’t deny him the opportunity to play. William never came off the field for the Tigers, playing running back and safety, and committed to the University of Texas at Austin in 1978.

Texas integrated its student body on Sept. 22, 1956, but the school was still in the early stages of its transformation by the time William arrived at the 40 Acres. Julius Whittier became Texas’ first Black letterman in 1970. The 1978 recruiting class William was a part of was one the first for the Longhorns that included more than just three or four Black prospects and featured Texas’ first Black quarterback, Donnie Little.  William remembers he could walk into a class of 300 and be the only Black student in the room.

William sat behind safety Johnnie Johnson his first two years in Austin, but intercepted four passes in 1980 after assuming the starter job his junior season. He then tied for second place in the program’s record book with seven picks as a senior.

He contends he should be tied with Earl Thomas, who snagged eight interceptions for Texas in 2009. William caught an eighth interception on the goal line in the 1981 Cotton Bowl to seal a 14-12 win over Alabama.

“We end up winning the game. I’m standing here holding the ball, talking to the guys. I get tapped on the shoulder and I hear voice go, ‘That was a hell of a game, No. 36,’” William said “I turn around, it’s ‘The Bear’ (Alabama head coach Bear Bryant). I’m looking up, all I can say is, ‘Thank you, sir,’ because he was bigger than life, man.”

It still caught the attention of NFL teams, though. William was drafted by the Detroit Lions with the 16th pick of the fifth round in the 1982 draft and carved out a six-year career with the team, intercepting six passes and recovering six fumbles.

William’s success helped Silsbee grow from being a community that wanted nothing to do with its Black citizens to one that celebrated them. In 2009, William and fellow Detroit Lion defensive back James Hunter became the inaugural inductees of the high school’s Wall of Fame.

“Mark Henry, WWE (wrestler), ‘World’s Strongest Man,’ he’s from Silsbee, too. He was a kid when I left,” William said. “He would tell me stories about, whenever I would play in Texas or in the NFL, he said, ‘Dude, the whole town would shut down. Everybody would be inside, watching you play. And then after the games, we’d all go outside and try to mimic you.’” 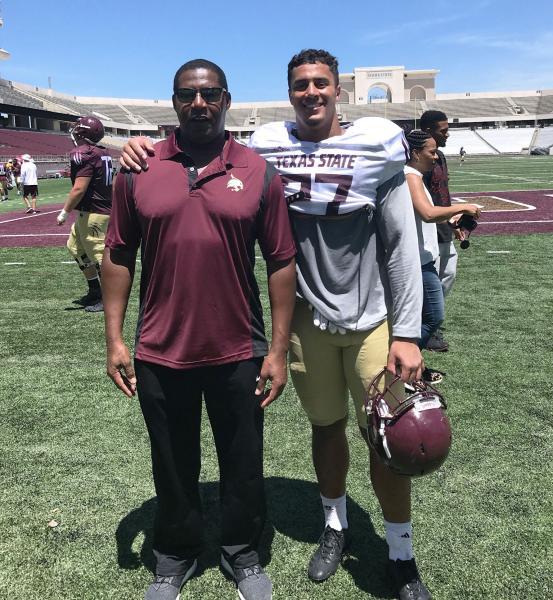 Gavin’s also tried to mimic William. The linebacker graduated from Austin Anderson in 2015 and spent a year at the Air Force Academy before transferring to Texas State. He spent most of his first three years in San Marcos as a reserve but was starting to see the field a lot more in his senior season, earning 15 tackles in two games.

He was always better prepared than most for what it took to be a high-level athlete.

“It’s been a blessing (to have William as a father) because I don’t really go into a lot of football situations and get kind of just completely blindsided. We’ve always had a great connection,” Gavin said. “When you watch TV as a kid growing up, you see the glories of reaching that level and playing sports, but you don’t see the grind that goes into it … So having that mental preparation leading up to it has helped so much.”

But on Sept. 14, 2019, in the Bobcats’ third game of the season at SMU, Gavin tore the ACL in his right knee. It ruled him out for the remainder of the year. It was the first time the game had been taken away from him.

He felt bad for himself for a short while on the sideline. But Gavin lives by a mantra: “It could always be worse.” He knew he’d have the support of both his mother, Lisa, and his dad. He was graduating as an exercise sports science major in December. Staying another year meant he could pursue his master’s degree. Returning for the 2020 season would also make him a leader on a team that was losing eight senior linebackers in the offseason.

He now considers the injury one of the best things that’s ever happened to him. He’s pursuing interdisciplinary studies in graduate school to complement his bachelor’s degree and is one of the top contributors on a Bobcat squad boasting its point differential (plus-2.0) since 2014.

Gavin’s mantra applies away from football, too. William has shared all of his experiences, both good and bad, with Gavin and his older brother, Hayden. A lot of the stories William sees in the news now reminds him of his childhood, “but it’s even scarier now how innocent people have been hurt and killed and just not respected.”

He’s had to have conversations with them that many parents never have to have with their children — conversations about how to survive in a world that judges you based on the color of your skin and, in some cases, considers you a threat for the same reason.

“If you’re ever around Gavin and say you’re in a restaurant, watch how he sits. He will put his back to a wall where he can see the door. And that’s something I’ve done and passed on to them,” William said. “I’m surveying the whole room to see if a potential something happens, where could it potentially come from? And what’s going to be my plan to exit and protect my family?

“It’s just in the back of your mind.”

It’s all been eye-opening for Gavin. He hasn’t taken any of it lightly, spending his free time researching Black history and learning about the multitude of issues those before him have faced.

William used football to get away from the racism he encountered. Gavin’s using the sport to combat it.

And while it could always be worse, Gavin’s message to anyone that will listen is that it could also always be better. He has a dream of guiding Texas State to its first ever bowl game. He also has a dream of never seeing the unlawful death of a Black man caught on camera again.

Gavin plans to keep preaching how he feels. He’s always open to constructive conversations. Everything he does on and off the field is to make the situation and circumstances he’s in better for those who follow.

“To me he’s always been my hero. He’s my best friend, he’s my mentor. If I’m having a bad day, I call him,” Gavin said. “As a grown man now, I offer him that same avenue. Like, ‘Hey Dad, if you’re just having a tough day, you can call me, too. Because I’m you as a younger version. So I understand you, you understand me.’ And for my entire life, he’ll be my hero.”