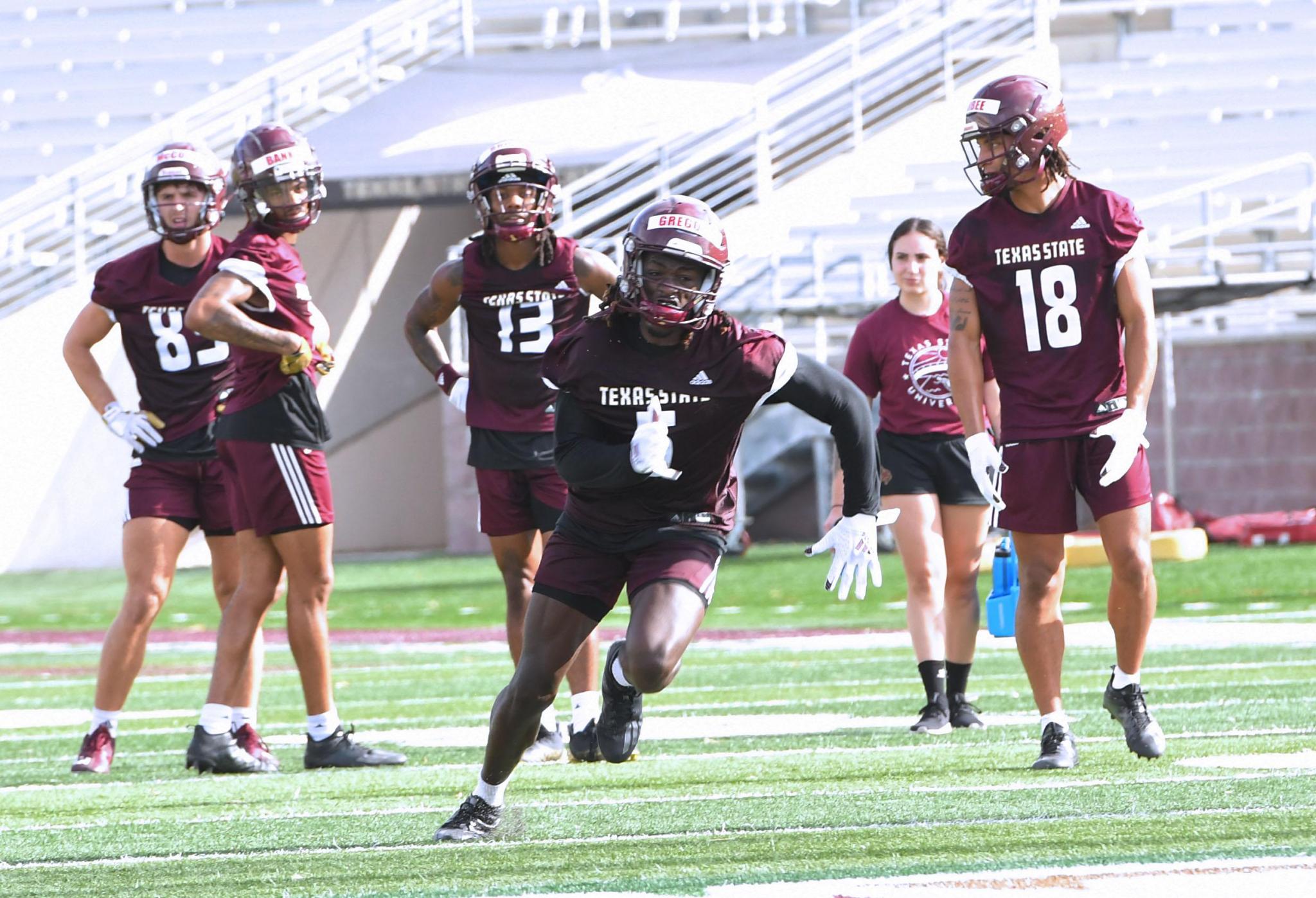 Demarcus Gregory was in the transfer portal for only a few hours before a coach reached out to him.

The Duncan, S.C. native began his college career at Ole Miss in 2018, joining a receiver room that featured multiple players who’d go on to the NFL, including Philadelphia Eagle AJ Brown, Seattle Seahawk DK Metcalf, New York Jet Elijah Moore and Miami Dolphin Braylon Sanders — a group dubbed “Nasty Wideouts.” Gregory was redshirted in his first year with the Rebels, played in 16 games over the next two seasons, then transferred to South Florida last year where he played in all 12 games, making three starts.

Gregory doesn’t remember the exact day he entered the transfer portal again — he said it took place “right after” the 2021 season ended and many outlets reported it on Dec. 7. USF had gone 2-10 on the year and he wanted to find a place that gave him a better chance to succeed. What Gregory does remember, though, is former Texas State offensive coordinator Jacob Peeler immediately messaging him on Twitter.

Peeler was the wide receivers coach at Ole Miss from 2017-19, was the coach who recruited Gregory to join the Rebels, and the coach who’d coined the nickname “Nasty Wideouts.”

“I guess he seen I was in the portal Friday morning and he was like, ‘So, what’s the plan?’” Gregory said. “So I started typing and as soon as I started typing — I didn’t even send the message yet — he called me and he was just like, ‘What are your plans this weekend?’ I was like ‘I don’t have nothing planned, I just hopped in the portal.’ He was like, ‘Well, can you and your family fly here?’”

After taking the call with Peeler in the morning, Gregory and his parents were on a plane making their way to San Marcos that afternoon. Short-notice flights were something Texas State head coach Jake Spavital wanted to take advantage of as he saw the program’s recruiting resources increased.

After the maroon and gold suffered a 45-0 loss on the road at Louisiana on Oct. 30, Director of Athletics Don Coryell wrote a letter addressed to Bobcat Nation, which was shared with the public on Nov. 1. In the letter, Coryell announced the school would be “making further investments in our football program, including enhancing our operations and recruiting budgets, and working towards implementing the full Cost of Attendance for our student-athletes as allowed by NCAA rules.”

Coryell, who took over as athletic director on Sept. 1, further discussed the investments with the Daily Record on an episode of the On the Record Sports podcast on Nov. 17.

“When you’re taking over a job in September and going into a football season, it’s hard to make changes at that point that might be significant in regards to the outcome of a game,” Coryell said. “I can tell you as an athlete, once you’re that far into the process, you’re in it and it’s kind of hard to change who you are to a certain extent. But it was really important for me to figure out what we can do here in December and January with this next recruiting class that might make a difference.

“And so that’s where we’re putting all our energy, that’s where we’re putting all our focus right now. It’s all going to be focused in on what we can do to help Coach Spavital with this next recruiting class, making sure that we sign the kids that we need to sign and that we’re not losing them somewhere else. And so for me, that was assisting with our recruiting budget, making that thing better than it is right now and giving him some opportunities to do some different things with it.”

The exact amount of the increases haven’t been disclosed, but Spavital noted in a press conference on Nov. 23 that the extra funds would take Texas State’s recruiting budget from worst in the Sun Belt to being “competitive” with the rest of the league.

“It’ll help us out a lot, especially traveling and hosting recruits,” Spavital said at the time. “You gotta be able to fly people in and out like on Tuesdays or Wednesdays or weekends or whenever and just bring them in. And sometimes that gets expensive, especially if it’s like a 24-hour notice to fly someone in. And (with the budget increase), we don’t have to worry about that as much and our logistics of it all. So it’s gonna help us out a ton, especially because this whole game comes down to recruiting. And as much as we can pump into the recruiting department, the better we can be.”

Gregory, whose nickname is “DMarc,” said he and his parents enjoyed their trip, and he saw how he could fit in with the Bobcats. Though other schools showed interest and Peeler left to become the wide receivers coach at Mizzou on Jan. 18, Gregory still felt good about transferring to Texas State and made his commitment official on Feb. 2. The 6-foot-2, 205-pound wideout was one of 32 recruits and one of 29 transfer athletes who made up Spavital’s 2022 class.

Spavital said on Tuesday that things stayed “relatively the same” during the recruiting cycle, even with the budget increases. Aside from upgrading the team’s facilities, which the university is currently fundraising for, the head coach thinks his program could do a better job while hosting recruits on visits, planning more activities for them to do while they’re in San Marcos.

But even when those improvements get sorted out, it won’t change the types of players Spavital wants to target. He wants talent like Gregory — players who are more concerned with getting to play football than concerned with the hype of being a coveted recruit.