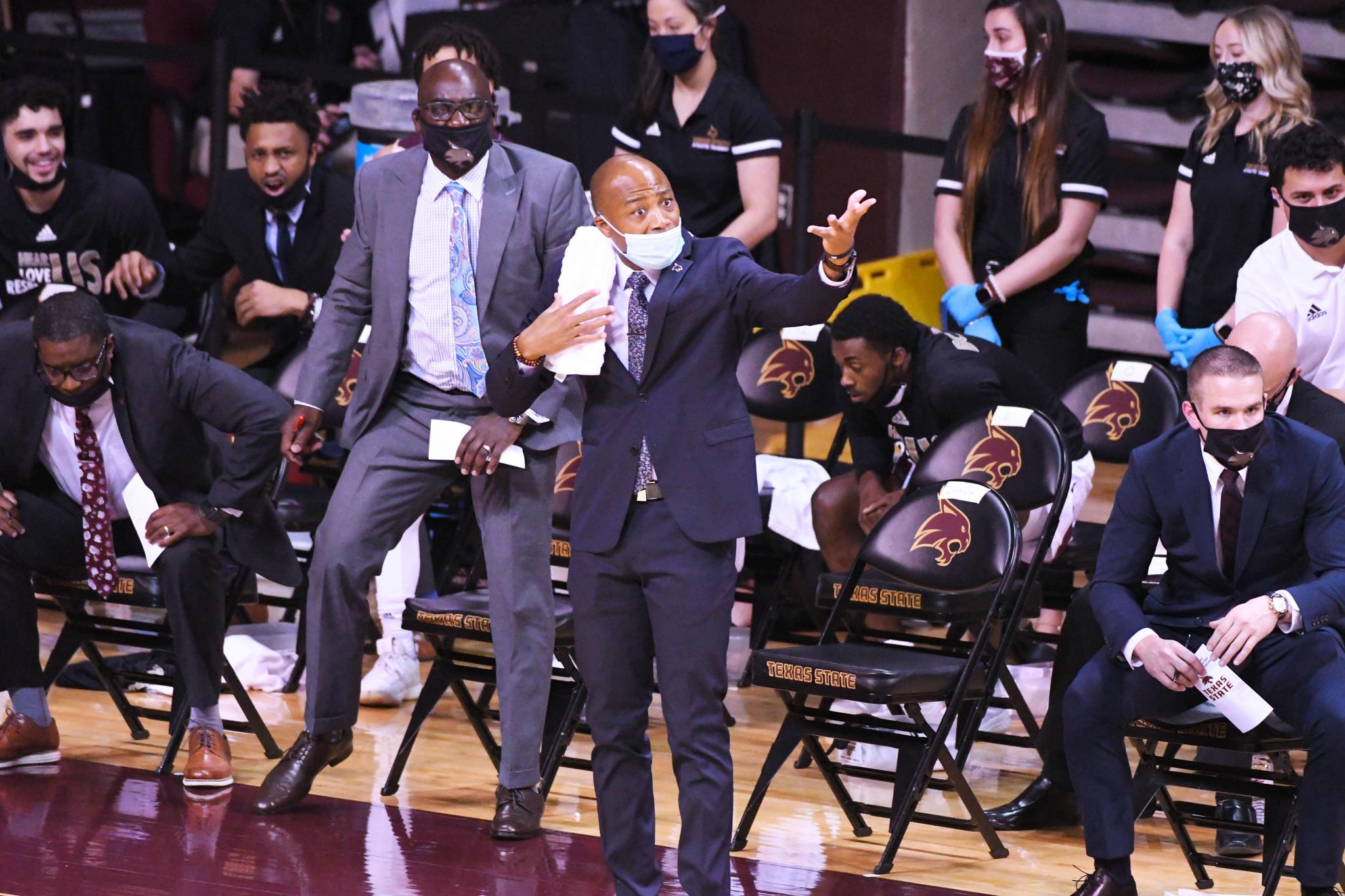 It’s only been four months since Texas State announced that Terrence Johnson would serve as the head men’s basketball coach for the 2020-21 season and many of the interim’s ideas for how to build the program’s culture have already taken effect.

The players’ locker room includes a pantry with healthy snacks and a refrigerator stocked with energy drinks. On the fridge’s door, held on by magnets, are laminated copies of the three pages of the Sun Belt Conference’s Civil Rights Trail booklet of sites located in San Marcos — the Calaboose African American History Museum, the LBJ-MLK Crossroads Memorial and the LBJ Museum of San Marcos.

A plastic box filled with Texas State-themed note cards sits on the counter in the pantry. Johnson calls it “the fuel station.” Throughout the week, players will write notes of encouragement, though not addressed to any specific individual, and add them to the box. Whenever a player feels like he's low on energy, he’ll pull a card from the box to give him a boost.

“We in this together!” reads one card senior forward Isiah Small wrote. The coaches write notes, too, but those are posted directly on or inside a player’s locker.

Two widescreen TVs face the lockers. Johnson said they mostly stay on CNN or other news channels — he wants his players to be up-to-date on current events. He has other ways of keeping them mindful of what’s going on in the world around them, too.

For example, twice during Wednesday’s practice — the first time taking place about halfway through the session and the second time taking place at the end — Johnson had the team shoot free throws for 2:23, the goal being to collectively make 80%. The 2:23 mark is intentional. February 23 is the day Ahmaud Arbery, a 25-year-old unarmed black man, was fatally shot while jogging in Brunswick, Georgia.

“I feel really, really bad about that whole situation,” Johnson said. “And I talked to my team about it and I wanted a way to kind of make sure that we never lose sight of the fact that we're blessed to be able to play this game.

“You know, you could be walking down the street, running through a neighborhood and be shot. But yet you're playing the game that you love. And hey, if you didn't get 80%, feel really, really good about running. So that's kind of how it came about, just bringing your real-life situations to everyday (parts of the) program.”

Johnson’s still working to build the program’s on-court culture. He felt he could’ve handled the team’s return from the holiday break better. He was hard on the players, noting that they didn’t seem to want to come back.

But last week, Texas State had to cancel its road series with Arkansas State due to COVID-19 concerns within the Bobcats program. The team had just four players allowed inside Strahan Arena, the rest having to quarantine during the gap between games. Wednesday’s practice was the first since the team had to shut down last week — a hiatus that lasted longer than the holiday break. Sophomore guard Drew Tennial, junior guard Caleb Asberry and senior guard Shelby Adams did not take the floor during Wednesday’s practice but Johnson said he would have a better idea of who was available to him by Thursday.

He took it easier on the players during practice. He didn’t expect them to make a shot considering some hadn’t touched a basketball in a while. They made plenty.

Little Rock, the team Texas State plays this week, has done a good job of building its culture as of late. The Trojans took the league’s 2019-20 regular season title in just the second year of head coach Darrell Walker’s tenure. Most of the roster returned for this season, including All-Sun Belt First Team members Markquis Nowell and Ruot Monyyong, and the team is finding similar success this season, currently holding the best record in the West Division.

Johnson said Walker’s ability to put his players in positions to succeed is something he wants to emulate with the Bobcats.

“He has a great pedigree. He knows exactly what he wants to do. And one thing in particular that he does is, he runs the right system for the right players,” Johnson said. “The system that he has is perfect for the players that he had. So, you know, Coach (Walker) has a big team and he understands where he wants to score the ball. You don't have those guys out there just jacking up 3s and playing dribble-drive.”