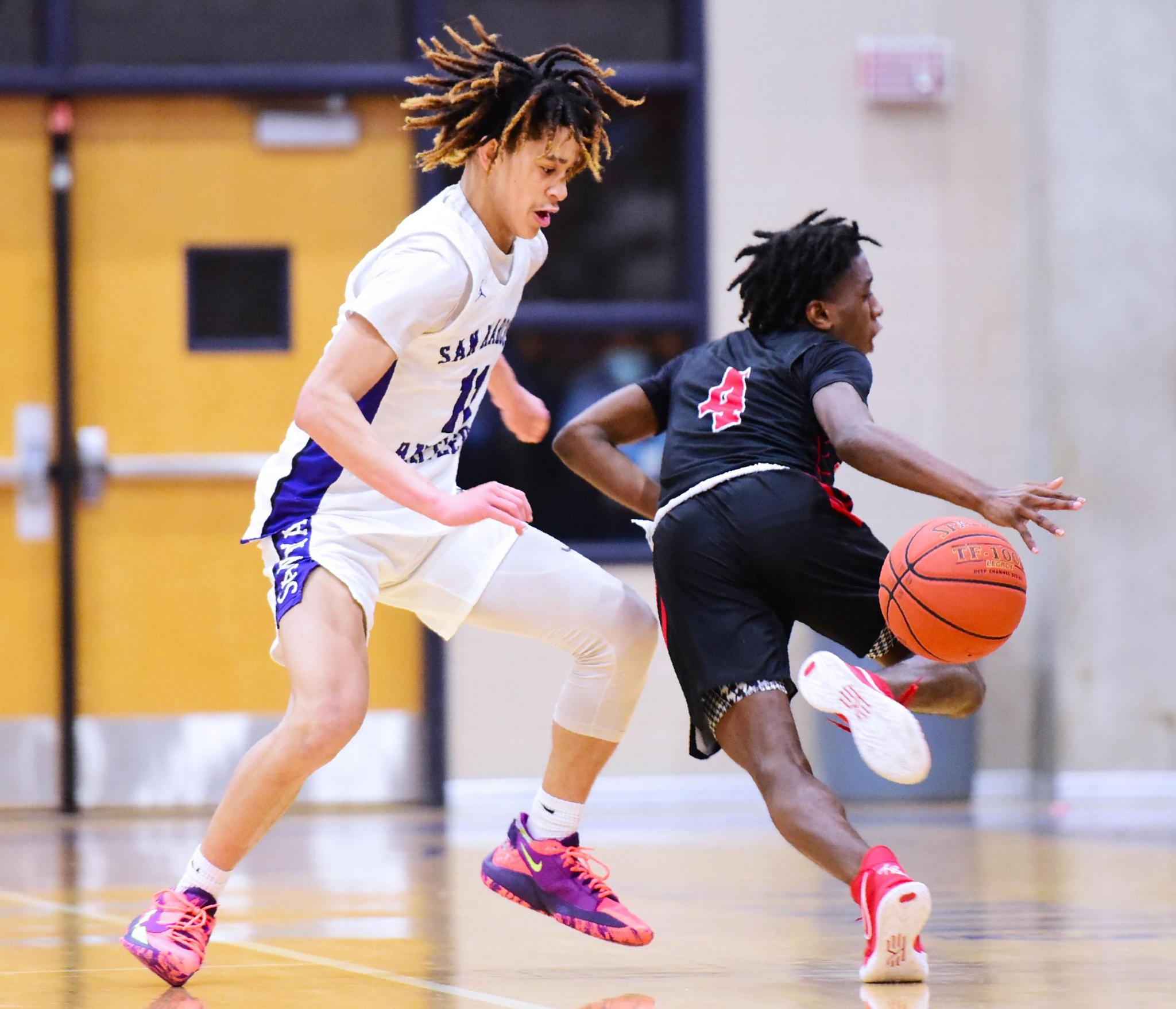 Gumbs’ family was one of the thousands that were displaced from their home in New Orleans because of Hurricane Katrina in Aug. 2005. The Gumbses had to live from hotel to hotel until a San Marcos family offered to take them in and help them get back on their feet after hearing the stories of Katrina evacuees.

Since then, San Marcos has become home for the Gumbses. It’s where Kaden’s grown up, and now it’s where he’ll play college basketball.

On May 11, the Rattler point guard committed to his hometown university, Texas State.

I would like to thank all the coaches who recruited me! i would like to thank my family and trainers that helped me get to where i am today, with that being said I am excited to say I am committing to Texas State University! #EatEmUp🏀 #TXST🐱 #SanMarcos #AGTG pic.twitter.com/ltvzFOEYnb

“We are ecstatic that Kaden chose to pursue a future close to home,” said Shakima and Alexander Gumbs, Kaden’s mother and father, respectively, via text. “We are most proud that Kaden prioritized the fit of the school, program and coach, which is essential for his success. Kaden is a family-oriented person, so being able to be close to family is important to him and to us. Coach TJ’s culture at Texas State is directly in line with (Rattlers head coach Dan) Miller’s at San Marcos which is perfect.”

“Coach TJ’s accomplishments in coaching speak for themselves but getting to know him as a person has been wonderful. We feel like he genuinely cares for our son and we know that he will be a great mentor for Kaden on and off the court.”

Texas State head men’s basketball coach Terrence Johnson made Gumbs a priority in the Bobcats’ 2023 recruiting class, taking advantage of his team’s close proximity to build a relationship with the District 26-6A Defensive Player of the Year of the past two seasons.

Miller has also built a relationship with Johnson, admiring what he’s done with Texas State’s program during his first two seasons as a tenured collegiate head coach himself. The two have built a bridge between the San Marcos and Texas State basketball programs, with Johnson and assistant coaches Donte Mathis and Robert Guster all attending Rattler games this season. Miller and his staff, along with Gumbs and other players, attended multiple games inside Strahan Arena this season as well.

“I was really happy for Kaden to find a college where he not only loves the university, but feels great about the coaching staff,” Miller said. “And with the leadership of Coach TJ, I think that he is in a great place. So I was happy for him, and also happy for him that the pressure (was gone) and (that he got) the relief of just knowing where he’s going to school, (and) he can just relax and play basketball and do what he loves to do best and not have to deal with a lot of that other stuff.”

Gumbs, rated as a three-star prospect, the No. 28 player in Texas and the No. 44 point guard in the nation by 247Sports, is a key addition in continuing to build on Texas State’s recent run of success under Johnson in men’s hoops, which includes Sun Belt regular season championships in each of the past two seasons. Gumbs will look to fill the big shoes of current Bobcats fifth-year senior point guard Mason Harrell once Harrell graduates and Gumbs steps on campus.

Miller, who was head coach at LeTourneau University from 2014-21, elaborated on what he sees in Gumbs at the collegiate level.

“He’s dynamic,” Miller said. “First of all, he’s athletic, fast, quick and dynamic enough for the Division I level to be an impact player, but he has the drive to be great. And that’s (essential), you have to have that and there’s no doubt that Kaden has that. So I think (him) coming from playing in 6A competitive high school basketball and playing in the competitive (Nike Elite Youth Basketball League), I think he will be somebody that will be ready to come in as a freshman and make an impact and make his mark. But, he also knows that it’s a process but he’s going to have the traits, I think, to be a very good point guard at the Division I level.”

Gumbs will play his final year of basketball as a Rattler starting this fall, but it won’t be his final year in San Marcos. Gumbs is a part of a growing trend of San Marcos athletes committing to Texas State during John Walsh’s first two years as SMCISD athletic director, and was the second Rattler athlete of the year to commit to Texas State, following Kutter Gage Webb, who committed to Texas State Baseball in March. Outside hitter Maggie Walsh and slot receiver Kannon Webb also committed to the Bobcats last spring, marking four total commitments to the maroon and gold from the Rattlers during 2021 and halfway through 2022.

Gumbs will return from Mexico this weekend after competing in the 11th annual Basketball Without Borders camp hosted by the NBA and FIBA. Gumbs was selected to represent the Virgin Islands in the camp, adding another unique and valuable experience heading into his senior season and eventual collegiate career in San Marcos.

“I think (Texas State) was a great choice for (being close to his family), and that wasn’t the sole reason that Kaden chose to be here,” Miller said. “But when he did and then you start to realize that he has such a big loving family and they can just go right up the road to his games — he’s got such big support from us at the Rattlers that we can just drive over after practice and go to his games. I think that he will soak everything Texas State has to offer in, but staying in San Marcos also is a great feeling for him because he’s so close to his family.”