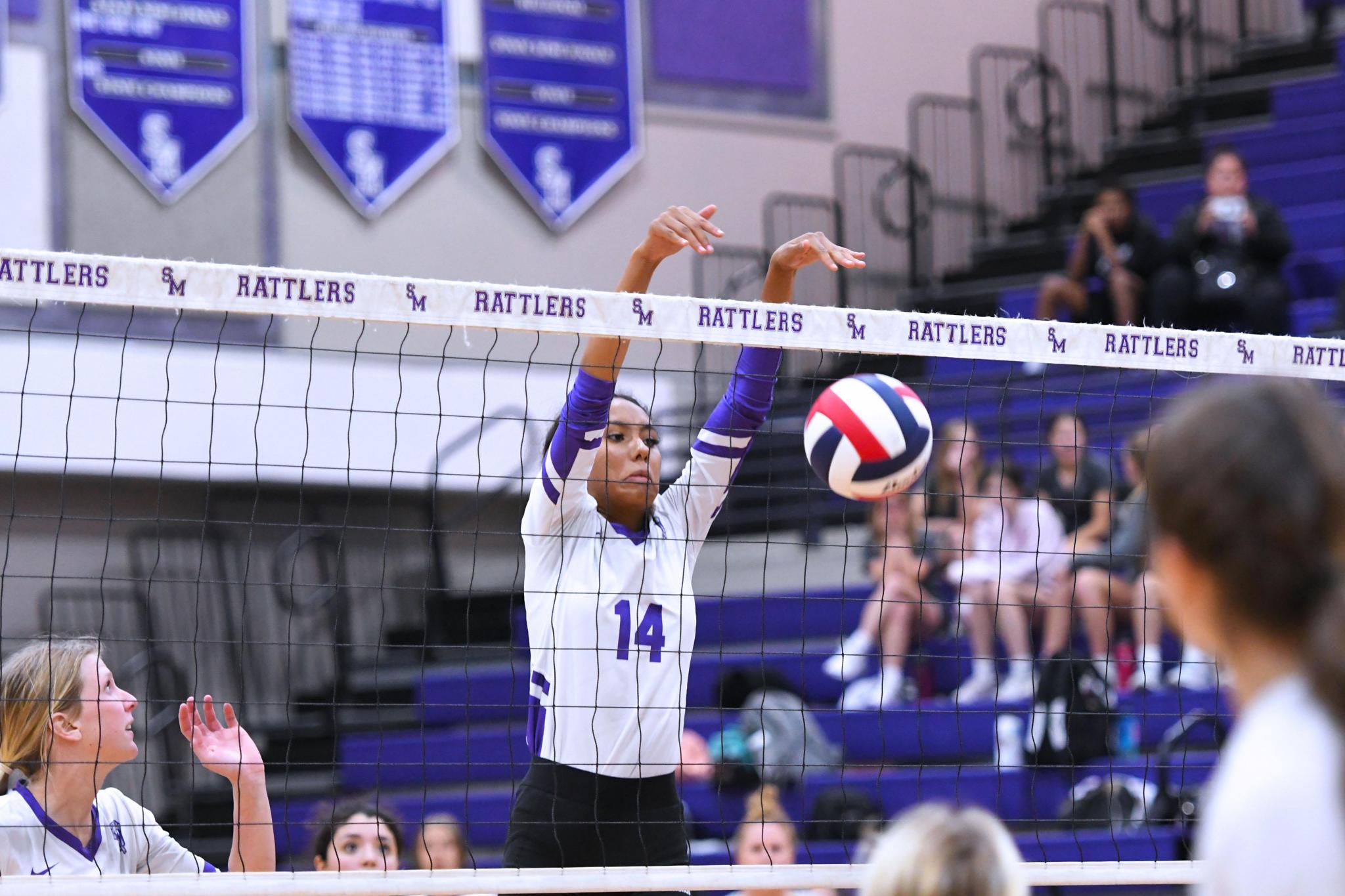 After competing in over 30 matches since Aug 9. San Marcos finally opened their District 27-6A campaign against Schertz Clemens.

The Lady Rattlers took an early lead, stealing the first set from the Buffaloes. However, Clemens would stampede back taking the second set inside the Snake Pit. The purple and white found their form late in the third set taking a 2-1 lead. The Lady Rattlers closed out the match in the fourth set, defeating Clemens 25-12.

Head coach Megann Ollett found the beginning of the match less than ideal, but was pleased with how her players responded. Coach Ollett believes if the team can connect offensively then the purple and white will display their full potential.

“I think we were slow to respond at the beginning, dug ourselves a little hole and then got ourselves out of it,” Ollett said. “I think they (San Marcos) showed a lot of resilience, but I also think there’s some pieces that we need to work on. I don’t think everyone was ready to fire all at the same moment, so we got to work on getting everybody on the same page at the same time to put it all together.”

After taking down the Buffs, San Marcos finds themselves on a six-match winning streak.  This is the second time in 2022 that the Lady Rattlers have had a winning streak of this length. During the stretch, the purple and white have beat their opponents by a combined set total of 18-5.  Despite the success, coach Ollett believes this team could use more depth — especially the bench.

“I think they’re doing great,” Ollett said. “I would like to continue to work on being able to build our bench to be deeper. I think we’ve done a great job with that, but (we still need to be) finding everybody different roles or more roles.”

San Marcos will resume district play next week against Cibolo Steele and Converse Judson.  The purple and white will look to begin district play 3-0 for the second consecutive season.  However, unlike last season, the Lady Rattlers will look to continue the momentum against an always difficult District 27-6A. Coach Ollett believes the win against Clemens will put the Lady Rattlers in the right direction, but each match will present a new set of challenges.

“I think Clemens is one of the top schools in our district, so it was great to get that win,” Ollett said. “From what I’ve seen out of this district, there is nobody you can overlook. Every game that we’re going to play, we’re gonna have to show up ready to play our best game. So that’s exciting and also nerve-wracking at the same time.”

When the Lady Rattlers travel to Cibolo on Sept. 27, it will be San Marcos’ first road game since a seven-match home stand that began on Aug. 30. The Knights are seeking their first win in district after losing against New Braunfels 3-0. Steele is 15-23 on the season and tied with Judson and Clemens as the only teams to lose their district opener. First serve is scheduled for 7 p.m. on Sept. 27.