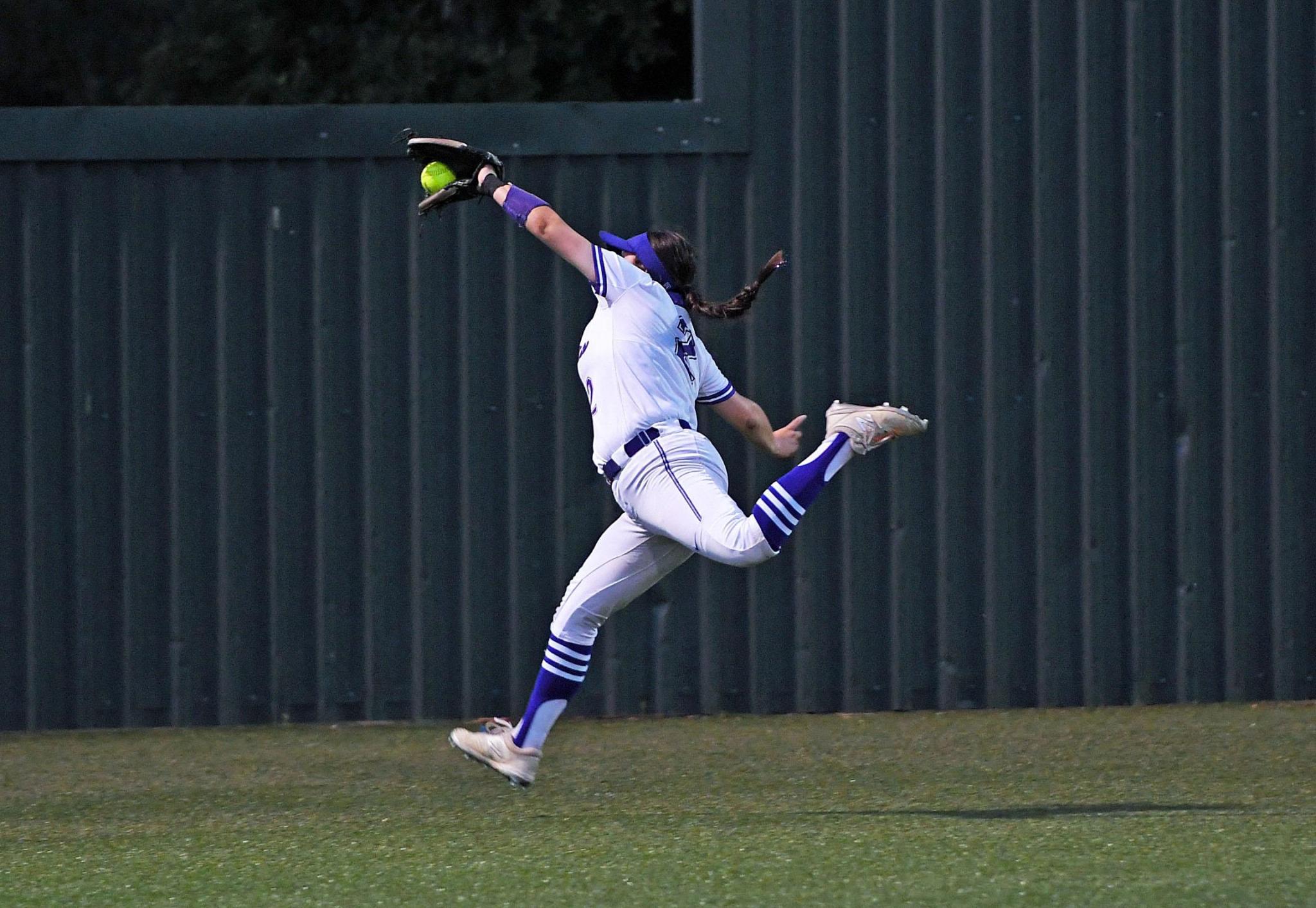 WIMBERLEY — San Marcos learned early it could compete with anyone.

With teams like No. 7 Austin Bowie, No. 15 Buda Hays and Lake Travis all receiving statewide ranking mentions or actually being ranked in the top 25 in UIL 6A, the purple and white faced many tough opponents. On Friday night, they fell 2-1 to No. 11 state-ranked Round Rock in a game that came down to the final at-bat.

“It was a fun season. It was really fun,” head coach Cathy Stoughton said. “We were actually able to stay healthy this year, which was a big piece. We fell on our face a little bit early on and then things just started to click. We needed to build confidence and believe in ourselves and I think a couple of games turned a corner for us mindset-wise because we saw that we could play with any team out there. And that’s what happened tonight.”

Round Rock (21-7, 13-1 District 25-6A) struck first with a hit from Emma Price to deep left field which resulted in an RBI and a 1-0 lead for the visiting Lady Dragons at the top of the second. Junior starting pitcher Kayli Saenz got San Marcos (12-18, 6-8 District 26-6A) out of a bases-loaded jam for the first time to keep the score there.

Defensive plays like junior shortstop Ava Sernas’ diving grab in the top of the fourth stalled the Lady Dragons’ powerful offense until the fifth inning. Round Rock’s 2-0 lead was the result of an error by the San Marcos defense — one of their few mistakes. Again, the gloves of the Lady Rattlers got back on track. With multiple runners on, junior outfielder CJ Castilla tracked down a ball headed towards the warning track, saving two runs.

The top of the sixth was more of the same for the No. 11 ranked team in the state when they loaded the bases one more time. Saenz got the Lady Rattlers out of the jam again.

“We have played great defense for most of the year, ‘’ Stoughton said. “We’ve had our ups and downs on defense. For us to come out and play like we did tonight was impressive. There were times tonight where they were threatening and they had runners on and Ava shut the door herself. I can’t say enough about our team and Kayli pitched her tail off tonight and had a great game. They stayed composed.”

Serna came up big on defense with the final out of the last inning. Lombardo was hit by a pitch, and junior outfield Eliza Lozano took the ball right over the first baseman’s head. Meanwhile, Round Rock’s Madison Azua was working on her second strikeout of the inning but Castilla had other plans and loaded the bases with two outs. That put the pressure on Richards to give San Marcos a chance to stay alive in the playoffs.

Stoughton spoke for Richards about how tough that situation is for a player.

“It’s tough. I mean, you’re looking at — especially with a senior, you’re knowing that this is make or break for your career,” Stoughton said. “It’s so hard and I felt for her because I told her, ‘You don’t need to define your whole career or even one game off of one at-bat. It’s hard. You never want to see somebody take that on their shoulders, but it’s a lot of pressure in playoff softball.”

Azua got the best of Richards with her fifth strikeout of the night and closed the season on San Marcos’ run with a 2-1 win in the first round of the UIL playoffs.

San Marcos concludes the season with a 12-18 record and a first-round playoff exit. The purple and white will look to make the postseason again next year as they head into the offseason with multiple underclassmen returning. Serna, Saenz, Lozano, DeLeon, Castilla and Alvarez all will continue to be key contributors to the program next season.