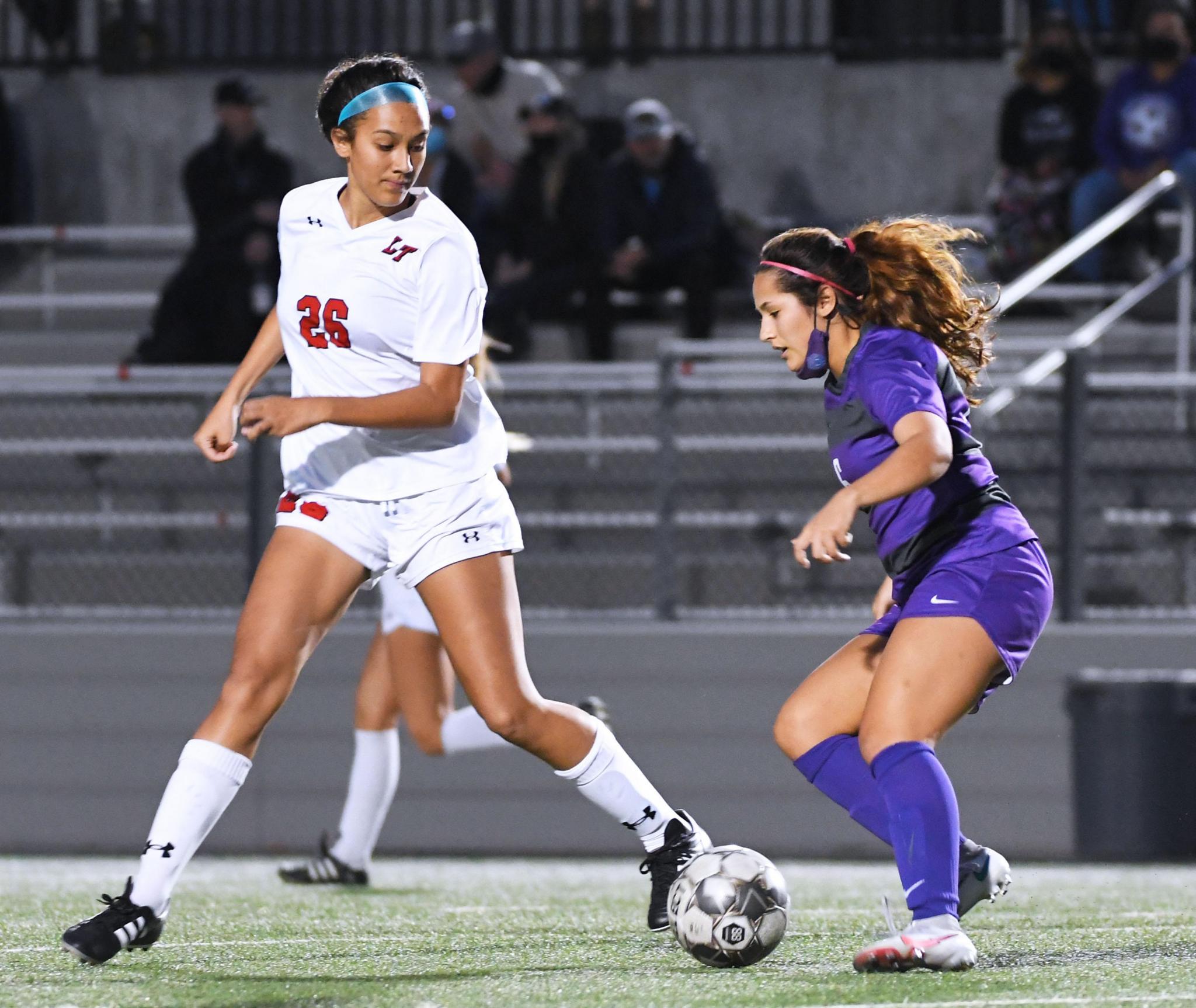 It’s been a year since COVID-19 disrupted the whole world. Schools closed, sports were canceled and no one knew what was going to happen. The pandemic caused the 2020-21 season to have multiple cancellations and postponements, and normal practices and team functions were altered.

But unlike last year, this season was played all the way through. Head coach Jason Carnley was happy that his team was able to finish the season, especially the seniors. He wanted them to finish strong, no matter what the score was.

“It’s been a crazy whole year,” Carnley said. “I mean we got shut down last year. This time, you finally get to finish off your senior year like you’re supposed to. We just wanted to finish the season off for them (the seniors). You know, get off this field with our heads held high, not worry about the score and just fight to the end.”

The Lady Rattlers faced the Austin Westlake Chaparrals in their final game of the season on Friday night, where they were defeated, 6-0, inside San Marcos Toyota Rattler Stadium.

San Marcos was coming off an intense game against the Lake Travis Cavaliers on Thursday night, where the Lady Rattlers held their opponent to a scoreless first half. Carnley thought his team would be able to play at the same caliber as they did the night before, but the Cavaliers played hard from the start.

“I thought coming off a big high from last night, we were gonna be able to fight and get after it,” Carnley said. “It just took us a few minutes to get into rhythm, and they just came after us. I mean, they were relentless.”

The Chaparrals (14-2-1, 11-2-1 district) did not hesitate in the first half. Four minutes into the game, they scored their first goal from about 30 yards out. Lady Rattlers sophomore goalkeeper Caitlin Tims was able to save a few shot attempts from Westlake, but they were able to make up for it less than 10 minutes later when they scored their second goal.

The opening half was slow and the energy wasn’t high. Westlake tacked on a few more goals before halftime. They scored their third off a deflection with less than 15 minutes left, and their fourth with only eight seconds remaining on the clock to go up 4-0 at the break.

Carnley said that during halftime, he was trying to motivate the team and remind them that this is their final game and it’s the last time they’ll take the field.

During the second half, the Lady Rattlers (6-11, 3-11 district) picked it up and only allowed two goals, compared to the four in the first half. They weren’t able to get many looks at the goal, but the defense was working hard.

Essentially, the biggest issue for San Marcos was the energy and intensity. They were excited during warm-ups, especially after their game against Lake Travis, but once the game started, it seemed to vanish. Carnley doesn’t want people to think his team isn’t capable of playing at a high-level.

“I mean everybody’s gonna look at us last night thinking that was a fluke, and it wasn’t,” Carnley said. “We weren’t the same team, but we were the same team, we just were beat up, and I don’t want to ever use an excuse, but it’s kind of what it was.”

The coronavirus pandemic has not only interrupted the games themselves, but the whole team itself. Normally, the Lady Rattlers would have team dinners and participate in team-building exercises, but that’s nearly impossible with a virus going around. Carnley is hoping that they’re able to resume those activities next year, so that they’re a closer team.

“It just makes things very difficult to be a cohesive unit,” Carnley said. “I’m hoping in the future, we can get back to some kind of normal, then we can just, you know, actually do team dinner and team building, stuff we haven’t done in, geez, forever. Once we get that, hopefully, we’ll see a whole different kind of San Marcos team.”

The Lady Rattlers are saying goodbye to only four seniors, Izabella Olivo, Isabel Duenez, Chloe Calderon and Arianna DeLeon, who have all been key players for San Marcos. They’re a young team, so Carnley said they have to find a few “true scorers” to replace those that are graduating. Soriah Banda will be a senior next year, so it’ll be fun to see how she will develop in her final year. Carnley said they’re gonna get more touches on the ball, and they’re gonna be a better squad.

With a whole offseason to prepare this time, there’s a lot to look forward to next season.