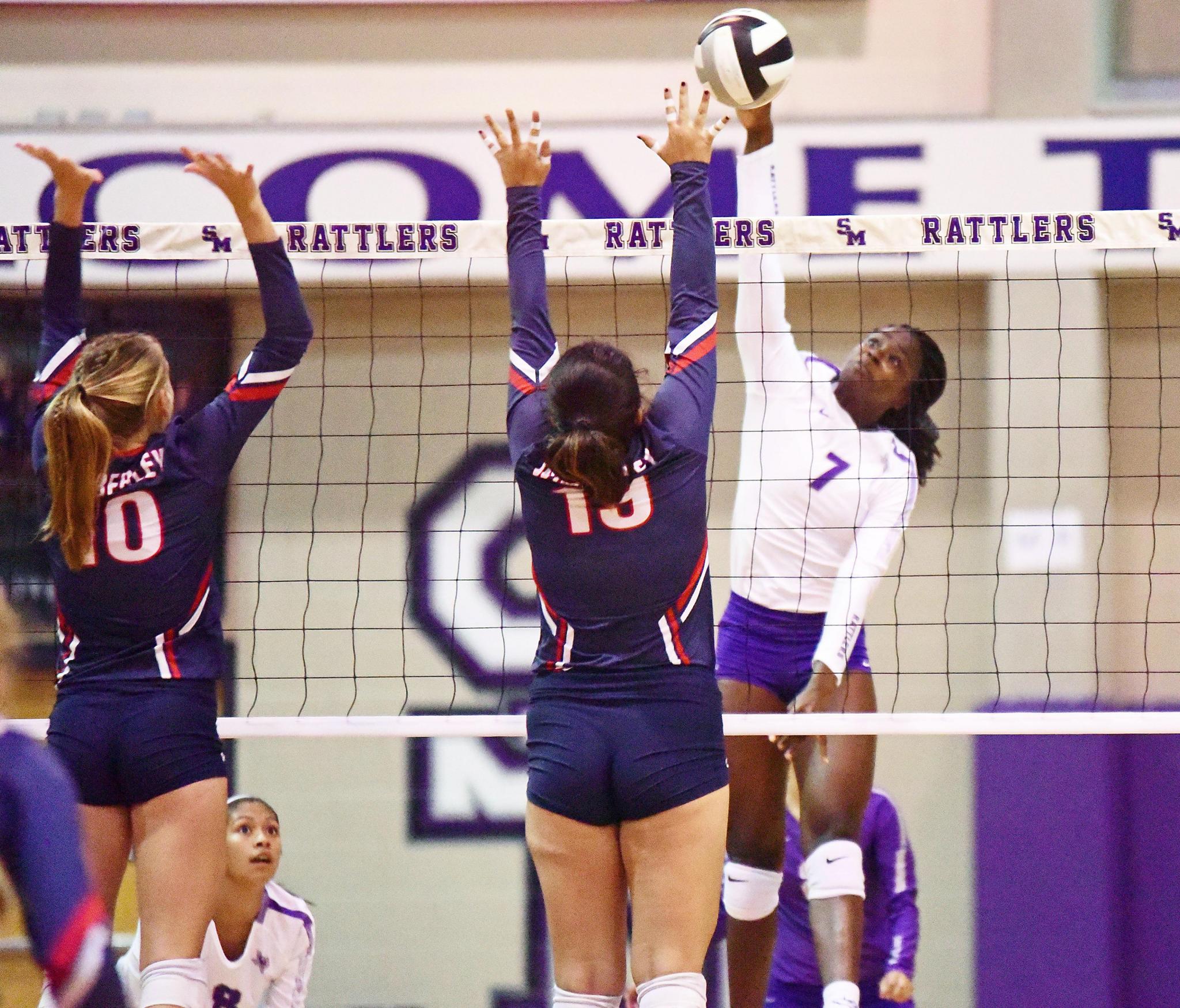 San Marcos kicked off the start of the 2018 season by losing to Bastrop at home in a 3-0 sweep. The team looked out of sorts for stretches of the game and was a step slow getting under the ball. The Lady Rattlers tallied 20 receiving errors, while the Lady Bears registered just half as many.

“I think we maybe second-guessed ourselves a little bit too much,” head coach Michelle Moreno said. “That caused us to make mistakes. We knew that we had to bounce back and think more fundamentally and let that work for us.”

Moreno told her team to get more aggressive in the next game against Wimberley. It took a few points before the adjustments took effect.

Sophomore setter Julia Antu’s opening serve sailed past the baseline, giving the Lady Texans the first point of the match. San Marcos was called out of rotation on the next serve, giving Wimberley a 2-0 lead.

The Lady Rattlers turned things around from there. They battled back to tie the score at eight before Antu served a 5-0 run to give the team its biggest lead of the set. A kill from senior middle blocker Devin Branch secured the first set, 25-20.

San Marcos went on to win the second set and built a 13-3 lead in the third, but started letting loose a little too soon. The Lady Texans whittled the lead back down to five, then went on a 5-0 run to tie the game at 22.

The teams traded points from there until a spike from senior outside hitter Madison Mendez got caught in the net, giving Wimberley a 26-24 comeback win.

“We saw a little bit of everything,” Moreno said. “We had a big lead at one point and then just kind of let it slip away. I think we were just trying too hard to do some things, that maybe we should’ve just kept it a little simple as far as offensively.”

Wimberley kept it close again in the fourth set, but the Lady Rattlers were able to find their footing. A kill from senior middle blocker Shyeann Lampkin secured the match point for San Marcos, the team’s first victory of the year.

“I was just glad that my girls just stayed focused and went after the ball,” Moreno said. “It was just a total team effort and that’s what we want.”

The Lady Rattlers (1–1) travel to Pearland for the John Turner Classic on Friday and take on Westlake at 11 a.m. Moreno said she’s excited to see how her team develops.

“We’ve got a lot to improve on,” Moreno said. “It’s a big team, it’s been less than a week, so we still have to work on gelling out there and knowing each other, and who’s got the seams and who does what. So, we’ve still got a lot that we still need to do and we still need to learn.”