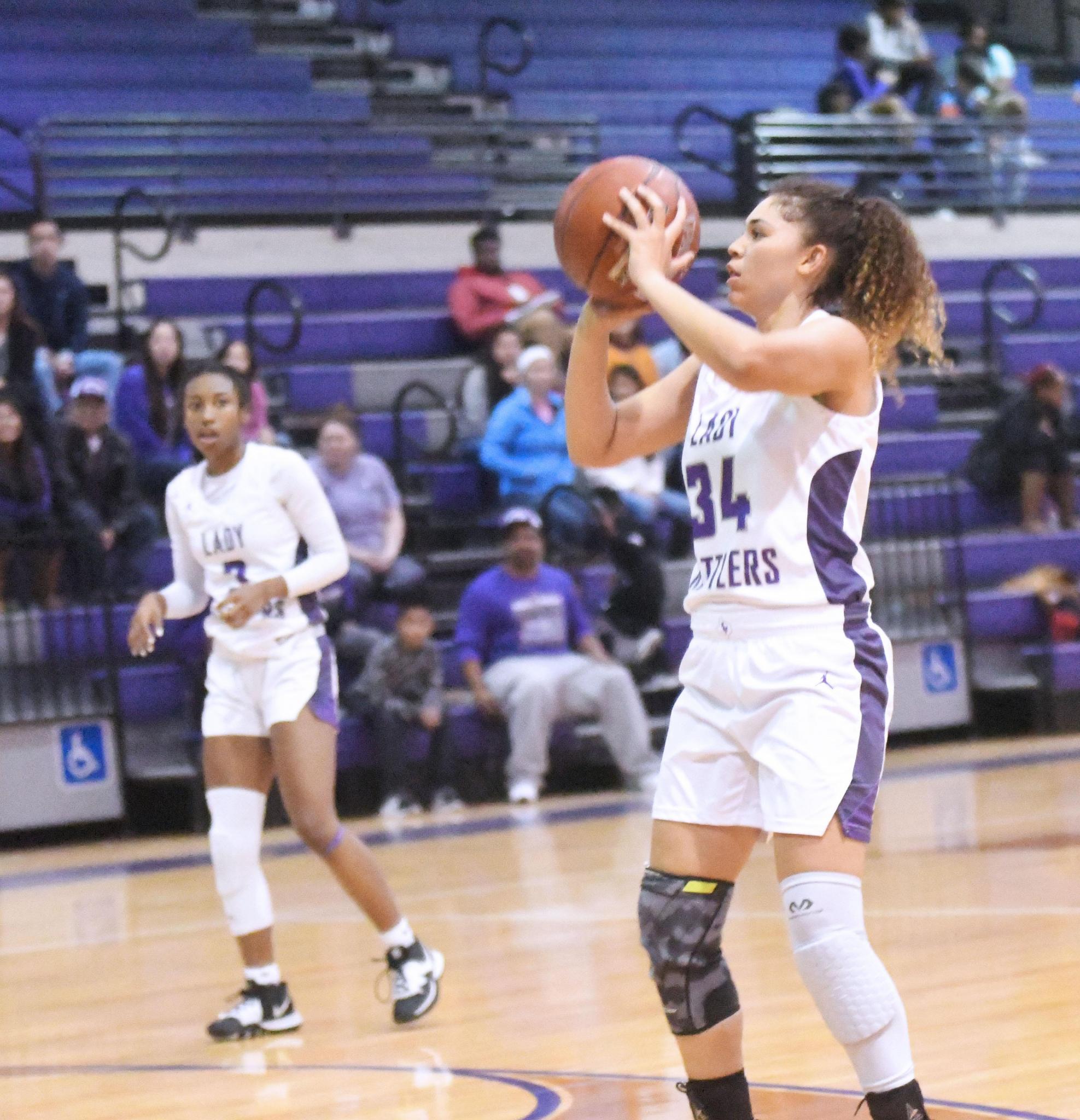 Grace Latham watched from the bench as her high school career came to a close.

The senior forward, who was disqualified from San Marcos’ penultimate game of the season last Friday, was subsequently suspended for the Lady Rattlers’ regular season finale on Tuesday at New Braunfels.

But even off the floor, Latham had an impact on the team. Junior forward Faith Phillips pounded the Lady Unicorns in the paint all night. San Marcos knew to look inside for scores — a precedent Latham helped set during her four years with the program.

Latham averaged 8.8 points per game in her senior season. Had she played, San Marcos might’ve ended up on top in its final game. Instead, the Lady Rattlers fell just short, losing to New Braunfels 57-54.

“I really enjoyed our team. They’re really fun. I’m gonna miss them,” Latham said. “(The game) just meant that we were strong and that we really bonded together. And we held together as a team.”

Tuesday night was the final game in purple and white for Miranda Lamb, too. The senior guard drained a 3-pointer from the left corner early in the first quarter to put the visitors up 4-0.

But the hosts followed with a 9-0 run and stayed in front until late in the fourth quarter.

Phillips scored eight points in short order in the final period to trim the lead to 45-44 with 3:51 left on the clock. The Lady Unicorns scored a layup on the next possession, but junior guard Kayla Presley knotted the score up with an and-one floater and free throw on the next trip down.

Presley pushed San Marcos up 49-47 with a putback layup. New Braunfels retook the lead an and-one layup and free throw and never let it go.

Lamb canned another trey — her third of the night — to cut it to 55-54 with 13 seconds left. The Lady Rattlers intentionally fouled and the hosts sanks both bonus free throws. Presley launched a game-tying prayer at the buzzer, but couldn’t find the bottom of the net, resulting in the 57-54 loss.

“We’ve had dog fights all throughout district, so it was only fitting to end the season with another one,” Lamb said. “Even though we didn’t come out on top, it still shows our strength and perseverance as a team.”

Phillips paced the team with 22 points, followed by Presley with 12 and Lamb with nine. San Marcos finished the season at 20-13 overall and 4-10 in district. It’s the second consecutive season the team’s finished with 20 wins.

Latham and Lamb both plan to play basketball at the college level, though neither has decided where yet. They’re expecting the underclassmen to keep up the 20-win streak.

“As they grow older and mature, I’m hoping to see a lot of great things from them,” Lamb said.

“I’d say most of the posts will become more aggressive and just continue to work hard and really dominate the game,” Latham said.

Kendall said the Lady Rattlers will take some downtime and begin spring training in a few weeks, focusing on skill and position work. She said she’ll miss the leadership Latham and Lamb brought to the team.

“They’re rock-solid kids, great in the classroom, great on and off the court,” Kendall said. “They’re great leaders, they kind of show these young ones the way. They’re gonna leave big shoes to fill.

“(I’m proud of) the commitment from all the girls, the hard work, their attention towards understanding the importance of chemistry and working hard to make sure that we did things to help us be successful along the way. It’s been a real hard-working, committed group of girls. They’ve gone above and beyond, but we still have a lot of work to do.”