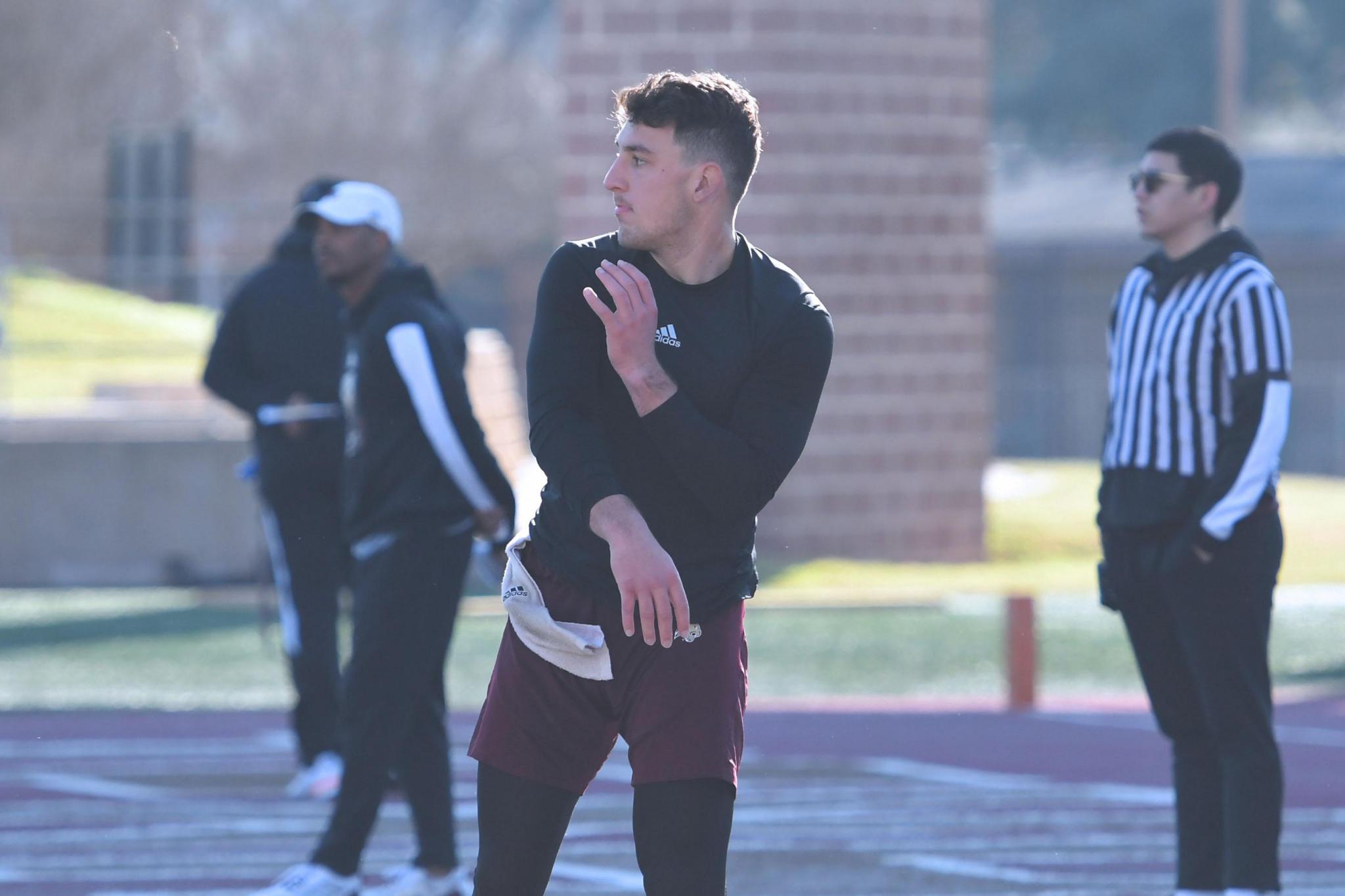 Layne Hatcher’s seen a lot throughout his time in college football.

Before the redshirt-junior quarterback ever made his way to San Marcos, he spent a year under Nick Saban as a redshirt at Alabama during the 2018-19 season. That Alabama team lost 44-16 to Clemson in the national championship, but Hatcher got the chance to be a part of the most dominant dynasty in college football history. Sharing a quarterback room with now-NFL starters Jalen Hurts, Mac Jones and Tua Tagovailoa can’t hurt either.

After one season at Alabama, Hatcher entered the transfer portal and committed to former head coach Blake Anderson and the Arkansas State Red Wolves — the school Hatcher had committed to prior to getting an offer from the Crimson Tide his senior year of high school. Hatcher played high school football at the Pulaski Academy in Little Rock, Ark., so committing to the Red Wolves also allowed Hatcher to return to his home state.

Hatcher’s time at Arkansas State lasted from 2019-21 and was a roller-coaster for the Little Rock native. Hatcher started his first year in Jonesboro behind established starter Logan Bonner — but then Bonner suffered a season-ending hand injury heading into the Red Wolves’ Sun Belt opener, prompting Anderson to call on Hatcher. Hatcher took the opportunity and ran with it, starting the final nine games of the season. Hatcher threw for 2,946 yards and 27 touchdowns and was named Sun Belt Freshman of the Year in 2019. Hatcher also helped the Red Wolves win the Camellia Bowl against FIU 34-26, leading Arkansas State to an 8-5 record.

Hatcher’s redshirt-sophomore year was spent splitting time with Bonner after he returned from his injury. Anderson implemented a two-quarterback system in 2020 due to both signal-callers’ stout resumes. The Red Wolves finished 2020 with a 4-7 record, including a 45-47 loss to Texas State inside Bobcat Stadium.

After 2020, Anderson decided to take over Utah State’s program. Bonner would follow Anderson to the Aggies, leaving Hatcher as the lone returning “starter” on the team — until new head coach Butch Jones lured Florida State transfer quarterback James Blackman to Arkansas State. Hatcher and Blackman split time until the Red Wolves’ seventh game of the season, where Hatcher would take over as the Red Wolves’ starter for the rest of 2021.

Hatcher’s final game for Arkansas State was played against his future teammates in a 22-24 loss to Texas State in Jonesboro. Hatcher entered the transfer portal four days after that game and was committed to the Bobcats eleven days after that.

Since then, Hatcher’s gone through a full spring at Texas State under head coach Jake Spavital and is going through another quarterback battle in fall camp.

“I think Spav’s just one of the best coaches I’ve ever been around,” Hatcher said. “(He’s) somebody that I can trust and have a real connection with. I think that gives me a (much) better feeling on the field and gives me more freedom and confidence in myself because I know that he has my back and we’re going to be in this together and it’s a good situation. So really (I) just feel free here and happy and loose. Couldn’t ask for anything more.”

Hatcher has also noticed a culture of accountability since arriving at Texas State — something that Spavital has been trying to instill in his locker room since stepping on campus in San Marcos.

“I think when you get a bunch of older guys that (have) the same goal as each other, there’s not much hesitation in that area,” Hatcher said. “We’ve got guys that are vocal and that understand not to take stuff personally. Sometimes you got to stay stuff with a loud voice and with a certain tone to get people’s attention. I think we handle that well.”

When it comes to the quarterback battle, Hatcher’s focusing on execution over flash. It’s nothing new to the fifth-year junior — Hatcher went through a quarterback competition in fall camp each of his three years in Jonesboro.

“(I’m focusing on) efficiency and knowledge of the offense,” Hatcher said.  “We got the talent, we got the guys. Just let them go. Don’t cause problems. Don’t have turnovers and just go play ball. And, you know, that all comes with just knowledge of the offense and knowing where to go with the ball. So long as the ball is going to the right spot. We’re in a good place.”

Hatcher’s decision to come to Texas State was motivated by something pretty straightforward — Jake Spavital himself. It’s something Hatcher’s relishing as he closes in on nine months in the maroon and gold.

“I was planning on coming down to just meet with (Spavital) for a couple (of) hours and I don’t know if I ever left,” Hatcher said. “I think I went home just to get another bag. But my mind was made up within five minutes, you know, there was no hesitation and no doubt and I’m the luckiest man alive to be here.”