No. 1 Longhorns hold off Texas State at Bobcat Ballpark

Baseball games between Texas and Texas State are always exciting.

Over the last 10 games between the Longhorns and Bobcats, the orange and white have won eight of them by a margin of 3.3 runs per game and are undefeated at home during that time span. But even with the stats weighing heavily in Texas’s favor, both teams continue to be a big draw to the fans no matter the circumstances.

A Bobcat Ballpark record 3,283 fans filed into the ballpark on Tuesday evening with intentions of getting a good game between two opponents who are separated by 33 miles apart. After scoring 12 runs between the bottom of the third and top of the fourth, No. 1 Texas held onto the lead it built to keep its winning streak against Texas State alive as the team defeated the Bobcats, 9-8, on the road.

“Obviously, that's a really good offense over there, too, so you gotta give credit to those guys,” head coach Steven Trout said about the Longhorns. “We scored six in the third, they came back to score six in the fourth but like I said, we have the chance to win the baseball game there at the end and that's all you can ask for. So super proud of my guys. Obviously, go get up (Wednesday) and you gotta flush this one.”

Texas State (10-3) fell behind 3-0 at the top of the third after a home run by redshirt sophomore shortstop Trey Faltine and a couple of hard hits into the field. The Bobcat offense didn't alter its mentality after trailing early in the game. Ignited by senior outfielder John Wuthrich’s home run, the hosts started to heat up. After scoring on an error, the maroon and gold started to earn their runs ‚ more specifically, freshman infielder Daylan Pena, who hit his first career grand slam against the No. 1 team in the nation and a pitcher who only gave up one home run the whole season.

The score gave Texas State a 6-3 lead with no outs. Pena was originally placed as the three-hole hitter in the Bobcat lineup and struggled early in the season according to coach Trout but tonight the freshman lived up to the hype. 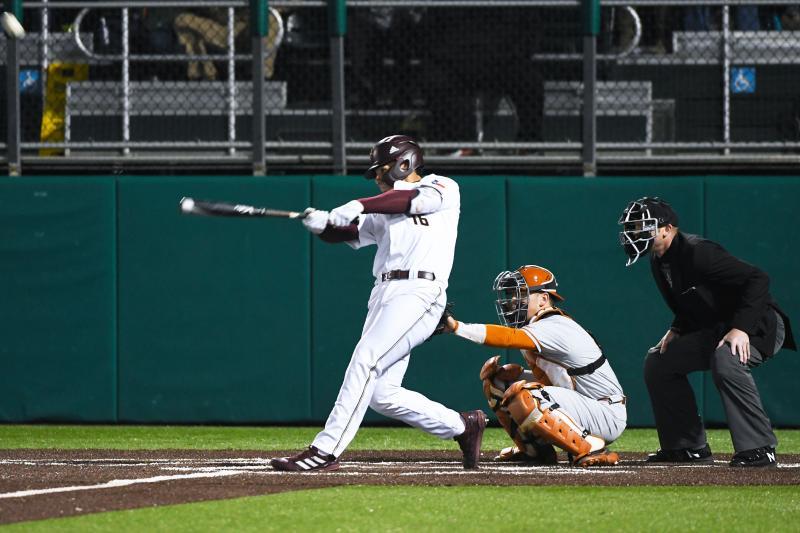 “What a big night for him tonight,” Trout said. “It was coming up with a huge hit and that's the beauty of our team. We got some guys down right now but some guys step in and have some big swings. He’s gonna have a great career here but obviously, he'll never forget that swing.”

The 3,000-plus fans jumped in celebration after watching their home team put up six runs on the visitors and all of the momentum shifted towards Texas State. To be ranked No. 1, you will get battle-tested and Texas (12-1) passed the test in the next inning by scoring six runs of its own, including a home run by Ivan Melendez while batting all through the rotation in the top of the fourth and regaining a 9-6 lead.

That’s when redshirt sophomore right-hander Cameron Bush came in to relieve the starter and put on a pitching clinic, especially at the top of the seventh when he struck out the side. Again, Pena came up with his fifth RBI of the night as Texas State trailed 9-8 at the bottom of the seventh. Bush held Texas scoreless for the rest of the game, along with senior right-handed closer Trevor Stivors.

The crowd, locked in as ever, cheering from both sides, screaming at one another, played a huge role in the game.

“That’s probably the loudest crowd I've ever seen here,” Trout said. “They were getting after it, especially there in the ninth. The Pena home run was about as loud as I’ve ever heard it here. So really cool for our kids and that's what I'm more proud of, is they came out to support them.”

Texas and Texas State, still struggling to get on the board, didn't score in the bottom of the eighth. That’s when the Longhorns subbed in elite closer Aaron Nixon, who the crowd let know they don’t like as they chanted “change your closer” after Nixon walked two batters in the bottom of the ninth.

Another walk by junior catcher Peyton Lewis loaded the bases with two outs for the hosts. Trout decided to pinch-hit redshirt junior Ben McClain for Isaiah Ortega-Jones in the clutch moments and he had a chance to take down the top dog in college baseball. Fortunately for Texas, the team didn’t change the closer as Nixon struck out McClain and waved goodbye to all the Texas State supporters. Trout talked about the decision after the game.

“You don't even need to look at his averages,” Trout said. “He’s had unbelievable at-bats. For the last three weeks, he’s been our leadoff guy.  Nixon is a phenomenal closer for them, lefties just kind of have a little better chance on him than righties. Just my thought was that he was gonna be able to lay off some of those pitches, which he did, and then he got in there at the very end. And so it's tough to come off the bench and do that. He’s been one of our best hitters for us and I was very confident he was gonna get it done and he'll get us more opportunities. So it'll keep coming to him.”

Pena finished 1-4 with five RBIs and a run. Bush pitched 4.0 innings with five strikeouts, no walks, no hits and no runs. Senior starting pitcher Trevis Sundgren (1-1) received the loss.

The Bobcats wrap up their home-and-home series with Texas on Wednesday at UFCU Disch-Falk Field. The first pitch is set for 6:30 p.m. The last time Texas State won a road game against the Longhorns was a 3-2 victory on May 5, 2016.