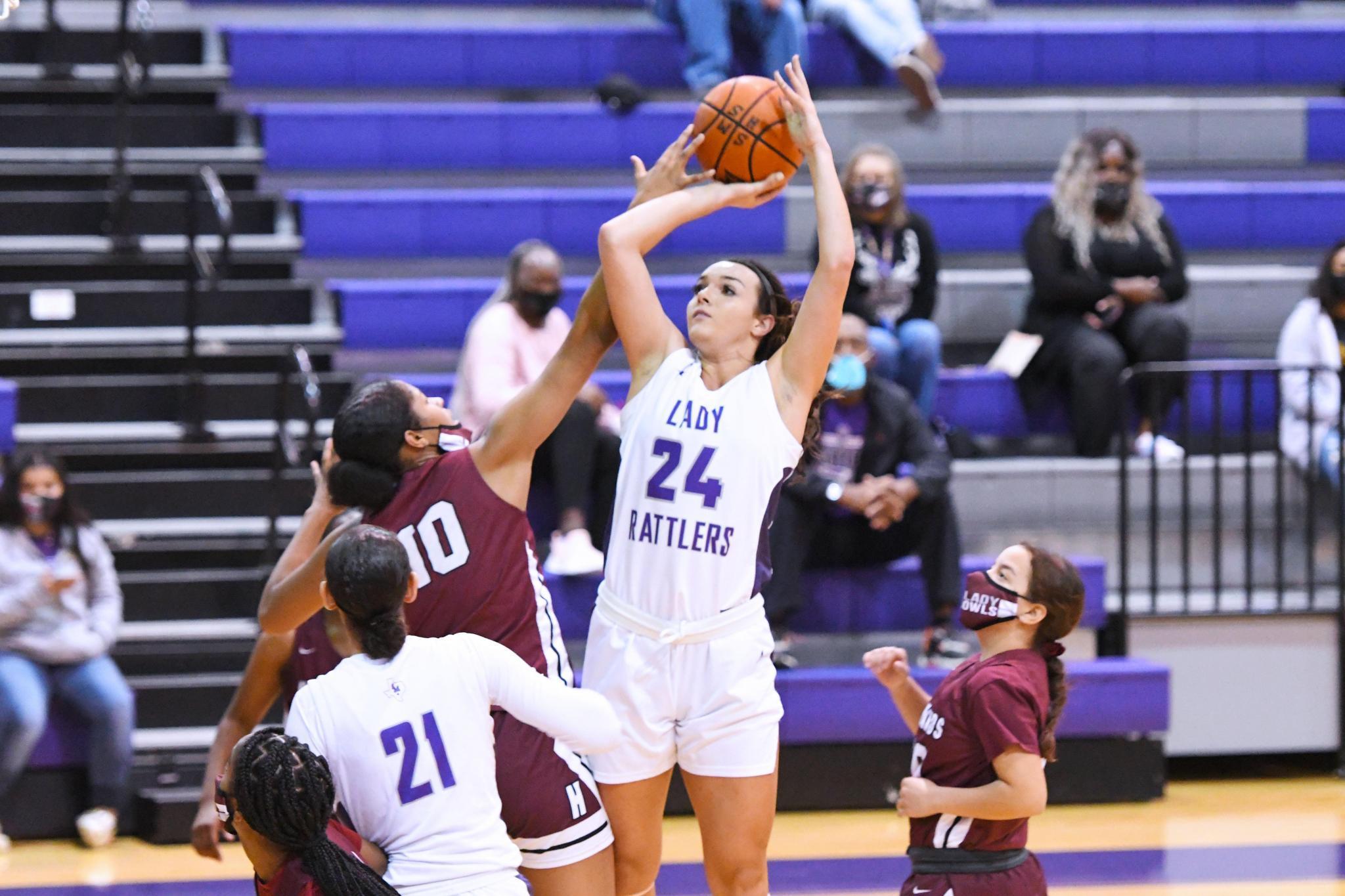 Phillips shows out in final appearance inside Snake Pit

As a freshman coming into a new scene, senior forward Faith Phillips was just excited to receive practice uniforms during her first varsity scrimmage. Now she’s a pillar of the San Marcos Lady Rattler basketball program.

Phillips dominated from start to finish in her final game inside the Snake Pit on Saturday, dropping a season-high 23 points in a 56-43 win against Lake Travis (17-7, 11-3 district) and effectively ended the Lady Cavaliers’ seven-game win streak.

“It’s our last game in this gym, so I had to show out. You know, I took everything I had and put it on the court today,” Phillips said. “We don’t play until at least Thursday, Friday or Saturday. We don’t know yet about our playoff game, so I’ve got enough time to rest and recuperate. I just gave it my all and I wanted to beat them. We needed revenge from our last game.”

Phillips got whatever she wanted, scoring seven of the first nine Rattler points. The four-year letter-winner dominated the inside but Lake Travis was automatic from outside, hitting four 3-pointers in the first quarter alone. The Lady Cavaliers turned up the defensive intensity with consecutive stops, leading to easy buckets.

Sophomore guard Mia Galbraith hit her third triple of the night to extend Lake Travis’ lead to 10 with 5:35 left in the quarter. Phillips pump faked her opponent out of the picture leading to a pull-up from the corner to stop the bleeding. After that, her team erupted with a barrage of 3-pointers from junior guard Angelina Sotelo, freshman guard Bailey Guzman and Phillips. The girls went a combined 4-4 from deep to close out the half. San Marcos led 26-25 after Sotelo’s shot from the top of the key — the first lead of the day for the Lady Rattlers.

The senior continued to show out. After a missed free throw attempt, she grabbed the board and hit a shimmy that stunned the defender as she drilled the shot, giving her team a 38-31 advantage. The visitors went back to their strong suit when they hit their seventh and eight 3s of the day. San Marcos head coach Veronda Kendall said they knew coming in the Lady Cavaliers were elite from outside. But if they could keep it from getting out of hand they knew they could hang around long enough to win.

“We just told our girls to close out, close out on them and make them put it on the floor,” Kendall said. “And let’s just trust what we’re doing and stick with it. And I think we were able to get a few stops there when we saw the shooting. We were talking about an adjustment and we just tried to take Galbraith away. And we knew there was gonna be some give and take there. And so that was the give and take we decided to go with.”

Galbraith went scoreless in the second half after the staff changed its defense to a box-and-one. Sotelo shadowed Galbraith everywhere on the floor, preventing her from getting any clean looks. Ironically, Lake Travis’ only points of the fourth quarter came from the 3-point line. The 10 3s still weren’t enough to top the performance by Phillips and the Lady Rattlers in the win. Senior guard Kayla Presley also played in her final game at home in purple and white — and even if she’s only been here for half the time Phillips has, the friendship on and off the floor remains a full-time gig.

“It means a lot, like it’s really special to me and I freaking love Faith. Like, that’s my girl. She’s been my No. 1 since day one, and it makes me kind of sad knowing that we’re both going to go to college and might not play together on the same team,” Presley said. “I’m really gonna miss her because she’s made me better, honestly, as a player.”

San Marcos (14-5, 9-5) awaits the results of multiple districts around the state to see who their playoff opponent will be. Either way, the No. 4-seeded Lady Rattlers will take on a No. 1 seed.

With five wins in a row heading into the postseason, Kendall is impressed with how her girls have learned throughout the season.

“It gets me more excited to try and continue that win streak. I mean, obviously we’re playing pretty good right now,” Kendall said. “I think the girls are understanding, now, the bigger picture and how important it is to value every possession, it is to execute on the offensive and it is to get stops on the defensive end and rebound and how important in-game adjustments may be. I think now, with all of that falling into place, we’re feeling pretty good.”