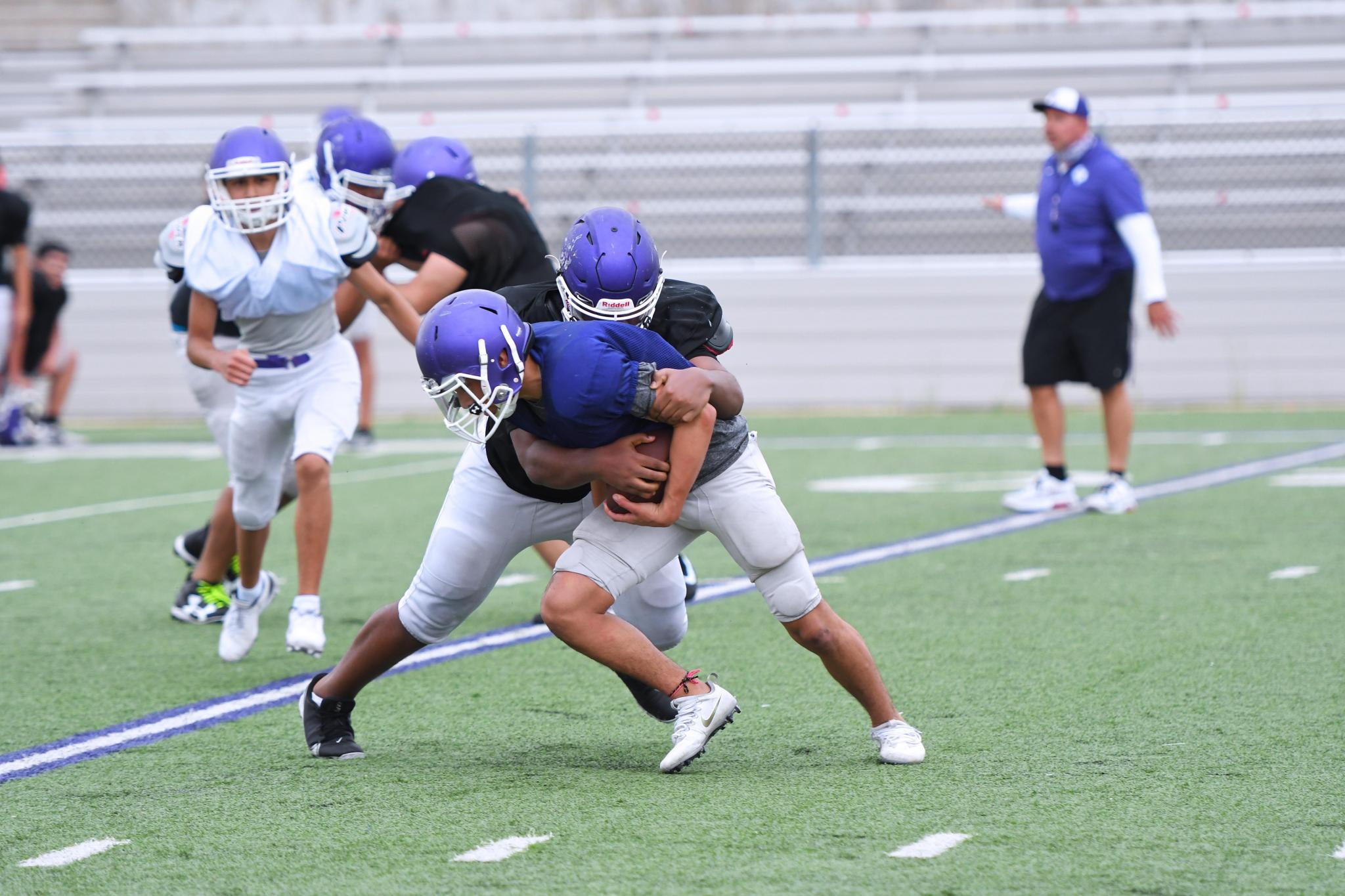 San Marcos never had a spring football practice under John Walsh. The head coach was hired May 20, 2020 — late in the school year and early in the COVID-19 pandemic.

But now 12 months later, everyone knows what to expect.

Last year, it was visible that it took some time for the athletes to get acclimated into the new “Rattler Way” of doing things. The attention to detail picked up, movement from drill-to-drill wasn’t as precise, players still had to learn their coaches’ tendencies and coaching philosophies as the season progressed.

Fast forward to Monday — the first day of spring practice — and with everyone acclimated to the grind, players knew what to do, where to be and how things are run.

Players who have been around the program are buying into the way things are done and it starts with the all-star lineup of coaches around the team.

“It really has been a new culture since they took over because they've brought a lot of energy every day,” junior free safety Malik Gordan said. “When people come in the morning or after the weight room, it's not just moseying around. We’re always hyped and excited for the work because of them. So it’s business but always fun with this staff.”

Before the team touches the turf, they continue to progress in priority No. 1 — getting strong enough to hang with the powerhouses that sit across the table from them in the district. Strength and conditioning coach and co-defensive coordinator Carl Thompson has been tasked with that goal since the season ended last year.

“I’m giving all the credit to them because they came in, they got all new coaches, they bought into everything that we're preaching,'' Thompson said. “They come in everyday ready to work and they attack that weight room. I know everyone's seen pictures and all that. I have to physically get them out of the weight room. We’re getting a lot stronger. But we can still still always be stronger. This whole time we're in spring while we're still lifting, so we're not cutting back the weights at all, we're still gonna get after it.”

After two days of practice, the purple and white jogged across the facilities to their main field on Thursday. Starting with some schemes and techniques, the offense prepped to go against the defense in the team’s first intrasquad scrimmage. A glimpse into the Rattlers’ strengths remain behind the sophomore quarterback Isaiah DeLeon, who has had an offseason of exposure camps and personal one-on-one sessions with quarterbacks coach Lee Vallejo. His talent is starting to shine in his leadership role. In the second practice, he threw the ball across his body off his back leg on a play action pass completed about 30 yards down the field to his receiver.

His size, arm and decision-making exemplify his offseason growth. On the first play of Friday’s scrimmage, the sophomore broke out a long run for the offense. The offense continued to impress, with plays made from players like wideouts Jamill Gordon and Nathan Henry.

Walsh, now in his second year as head coach, has mixed feelings about how things should go. Considering he calls the offensive plays, he wouldn’t complain. But in his state-championship mentality, he also wants to see his defense get stops.

“If the offense comes out and scores four or five times in a row, I should be really worried. But today I was really pleased with the momentum swings,” Walsh said. “Also, I was pleased with the offense that came out and moved the ball a couple of times and then the defense bowed their neck a little bit, got some momentum and got some stops on the field. So that was good to see from a head coaching standpoint.”

The goal for the Rattlers, like any other program, is simple: get everyone better while keeping the team completely healthy. San Marcos has a couple more team goals and is waiting for more players to step into the depth chart in the next season.

“Mostly for spring ball as a head coach, you just hope to see everyone come out injury-free. That’s coaching cliche, but it is what it is,” Walsh said. “We know who our starters are for the most part. We’re looking to add some depth, I don’t care how young you are. We’ve got a pretty good idea of who our 22 (starters) are and really more than that, we know who our 30 (top players) are. Right now, we're looking for players 31-50.”

The Rattlers had a solid first week of spring football. They have two more weeks of practices to continue to get better as a team. Another opportunity presents itself on Monday at 4:30 p.m.