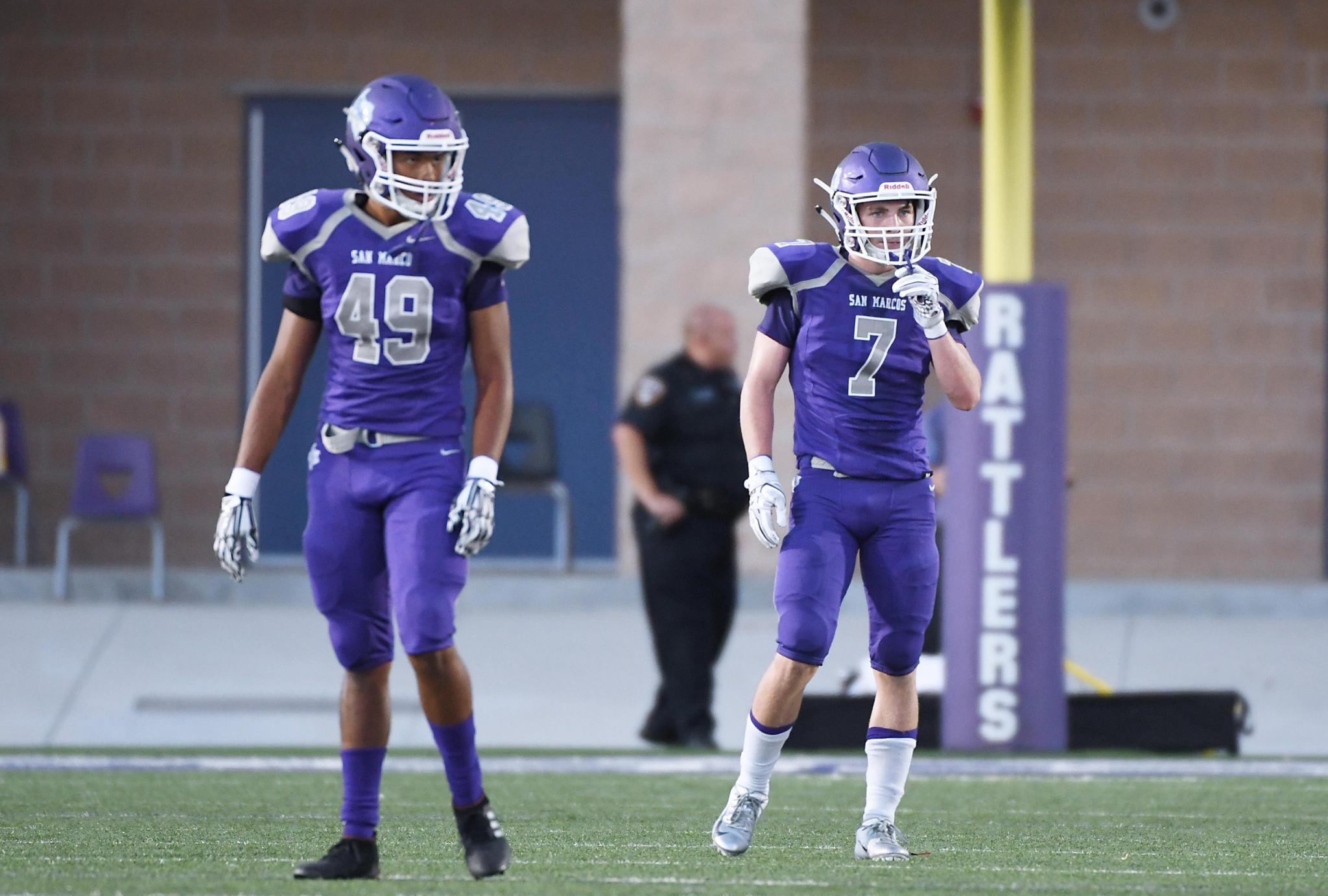 San Marcos doesn’t take a week off. Even when there’s no one to play.

During the team’s bye week, the Rattlers keep the competition alive. On Thursday, the team holds the Rattler Olympics, a series of seven events meant to bring the team closer together. The players split up into teams of 12, sending a pair of teammates to participate in badminton, hot shot and Around the World, as well as a football toss, soccer kick and bench press contest.

The games culminate in the “Gladiator Run,” an obstacle course filled with dizzying challenges.

The teams get points for each event, gold medalists receiving the most and bronze the least. The Gladiator Run is worth the most points. The team that finishes with the most points at the end of the Olympics receive “highly-coveted” T-shirts.

“The Rattler Olympics is really fun,” senior outside linebacker Terry Stennett said. “(You’re) pretty much just running, spinning around, doing a bunch of stuff like that. Last year, we did like a spin around and then shot the basketball into one of the trash cans. And we had to kick field goals. It’s just really fun. Everybody just comes together.”

Who usually wins the Olympics?

“The team with the most outside linebackers,” Stennett said.

After the Olympics, San Marcos moves into the lock-in portion of the evening. The team enjoys a meal prepared by the booster club, then break into their position groups to discuss what improvements they can make over the remainder of the season.

“We talk about where the team is and where we want to go with this team,” head coach Mark Soto said. “And then we come back together and talk about that and kind of commit to doing better, changing these things in practice or these things in our thought process to help make the team a lot better.”

The bye week is capped off on Friday after school, when the coaches suit up for their annual flag football game against the seniors. The coaches, Soto says, have never lost.

Soto said he mostly plays linebacker, but likes to have a cup of coffee at quarterback — “so I don’t have to run so much.” If Soto completes a pass, catches a pass and defends a pass, he considers it a good day.

How good is Soto on the field? Stennett shrugged his shoulders.

“Honestly, I was just trying to get out of the way and let (former quarterback) Prudy (Calderon) run whatever he wanted,” Williams said. Calderon threw him the ball anyways. “And I saw Coach Soto coming. And I was like ‘I can’t let him of all people (get me).’ So I just cut back outside. And little do I know, he’s like in a splits on the right side of me while I’m running.”

Williams also said the coaches play by a different set of rules during the 7-on-7 match, which is why they’re undefeated.

“They cheat,’ Williams said. “The rules are very in their favor. We can’t throw the ball to the center like they can. They play the two-completion rule. So they go two yards with two completions right there, keep the chains moving.”

The seniors face an uphill battle again this year. Their biggest hole is at quarterback, where all three on the varsity roster are currently underclassmen. Still, Stennett remains confident this year’s squad can be the first to pull off the upset.

“I don’t even remember the scores (from previous years),” Soto said. “I know it’s always a lot to a little, though.”

The Rattlers will return to action next week they travel next week to Cibolo Steele to take on the Knights at 7:30 p.m.