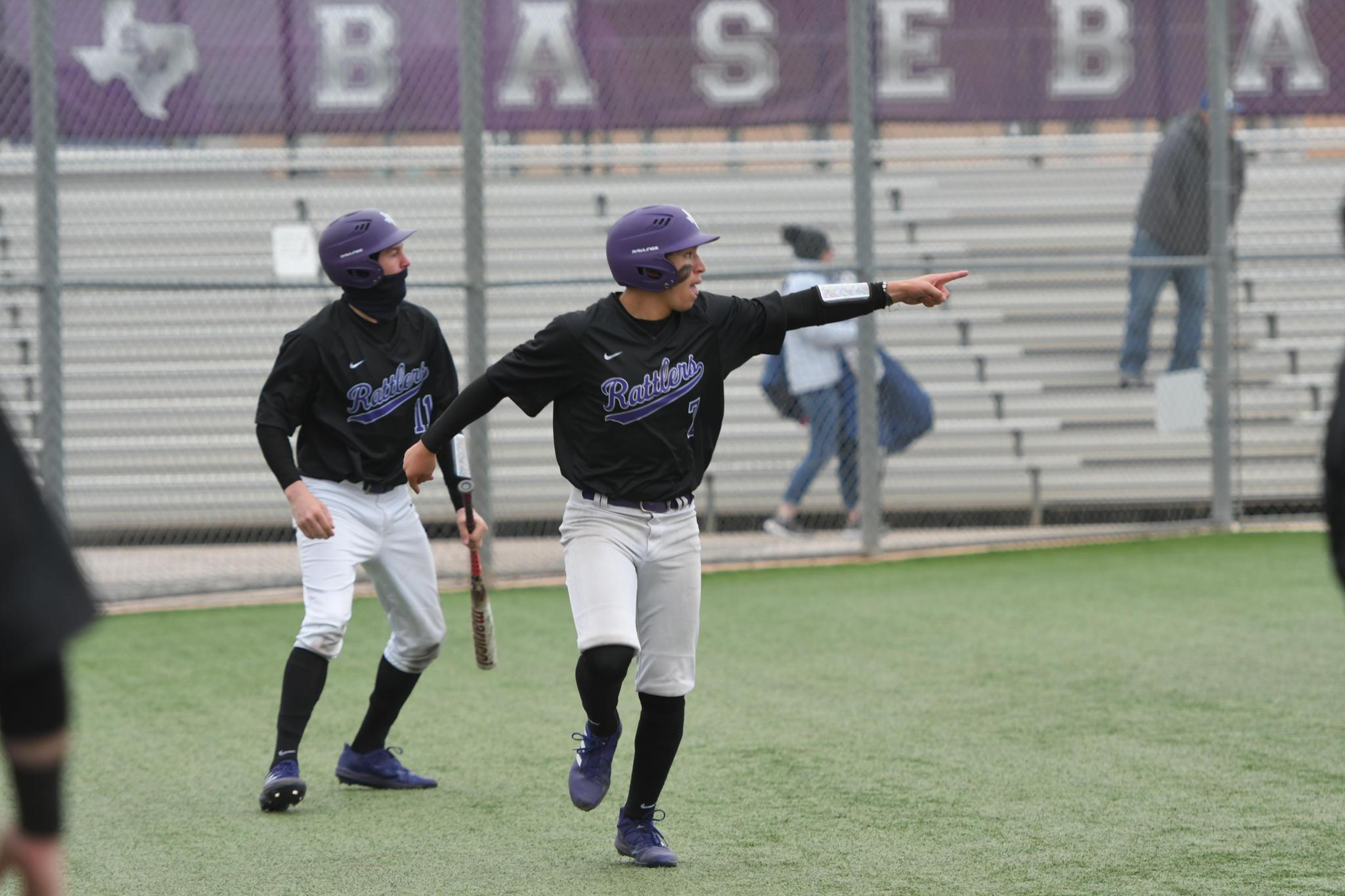 Despite near freezing temperatures and periodic rain throughout the day, the Rattlers finished off their season-opening tournament with 6-3 and 7-4 victories over Kerrville Tivy.

San Marcos’ first win of the day was powered by the purple and white scoring two runs in each of its first three innings, as well as playing stellar defense behind solid pitching.

“Well, we wanted to go in here and we wanted to have another good day. We wanted to put back to back days together. We did. We played real well the first ball game and lost a little focus the second,” head coach Bryan Webb said. “Tivy’s a very proud, traditional program and after we beat them 10-0, we just went in there and kind of laid down a little bit. (We) had to refocus there that last inning and (we) put together a pretty good inning and won the ballgame.”

The Rattlers’ second half of their doubleheader was another three-run victory, but happened in an almost backward fashion compared to their first game. San Marcos trailed the Antlers 4-1 for the majority of innings played, but exploded in the top of the fifth, putting six runs on the board and taking their first and largest lead of the game at 7-4.

Sophomore middle infielder Kutter Gage Webb started the RBI party after the bottom of the lineup loaded the bases, bringing in two runners on a standup double. The top of the lineup followed and continued to do the same, with Senior Johnny Pardo, Junior Ryan Hix and Chomel all driving in runs of their own.

“We got our runners on (and) they took about two pitches off the elbows,” (Kutter Gage) Webb said. “It's gonna be sore tomorrow but they got us, the top of the lineup up (to bat), and we did what we did and scored some runs for them--”

“I had a horrible first at bat, but with the bases loaded I shortened up and hit one right up the middle.” Pardo added.

The purple and white’s pitching took things over from there, as sophomore Rip Soto earned the save forcing the Antlers to go three-up, three-down in the final inning.

San Marcos will travel to Denton Guyer next weekend to compete in one of the toughest early-season tournaments in the state. The Rattlers will face Guyer, Rockwall-Heath, Frisco Wakeland and Flower Mound. They’ll kick the tournament off on March 3 against Frisco Wakeland at 4 p.m.