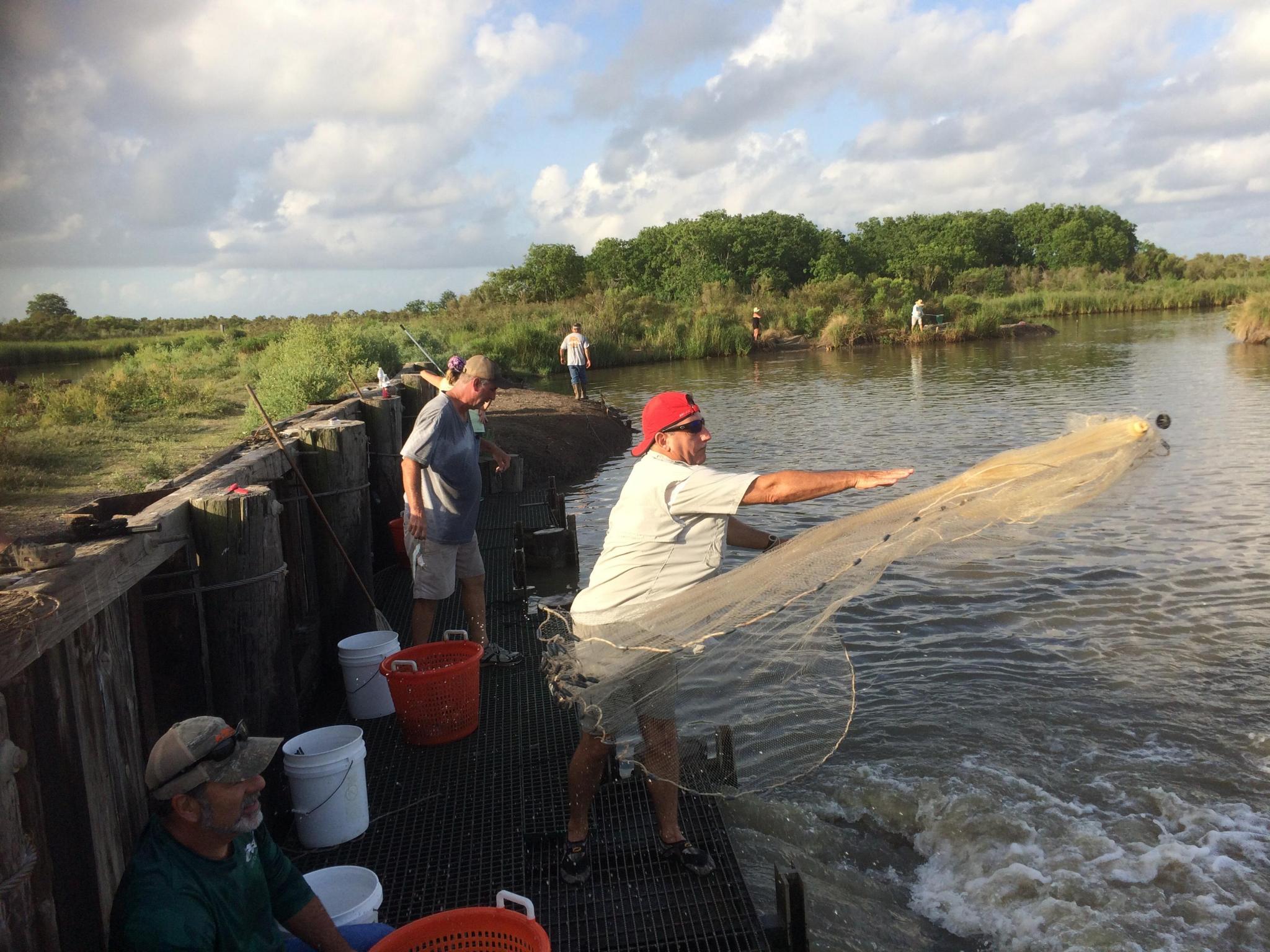 As Todd beached the boat in the canal behind the weir memories began to flood back into my conscious mind.  I was in the Rockefeller Wildlife Refuge in Southern Louisiana near Cameron again.  The Rockefeller Refuge is a 73,000-acre wildlife refuge consisting of miles of canals, levees, lakes, pristine marshes and weirs.  Weirs are small dams that control the water levels in the marsh.  Water gushing through the weir is a magnet for shrimp, crabs and fish.

Our buddies C.J. and Brandon were in their boat while Todd and I were in his G-3 aluminum boat powered by a 90 H.P. outboard.  Todd grabbed his cast net and bucket, ran to the open spot on the weir, and began to throw the large net.  Three days previous Todd and his wife, Tonya, had caught 15 pounds of nice shrimp and a big bucket of crabs.  But today was a different day.  Each cast netted only 2 or 3 shrimp.

Several fishermen were crabbing. Crabbing is a fun sport and very simple.  Just tie a chicken neck on a string and throw it into the canal and when you feel weight on the line, pull it slowly toward the bank. At the right moment a long-handle net is slipped under the crab who is holding on to the bait with his big claws.

I put a shrimp on my hook and fished while Todd cast the net. But no fish.  The crabs wouldn’t leave my shrimp alone long enough for a fish to bite it.

Knowing we were not going to catch enough shrimp to eat we decided to go fish in another canal. We had enough shrimp and finger mullet for bait.

We motored the boat near another weir. Todd’s buddy, Doug, had caught two limits of redfish at this weir only a few days previous.  But we were greeted by “No trespassing”, “Keep out”, “Boats not allowed beyond this sign”. We concluded that Cajun Doug couldn’t read.

So we began to work the bank of the canal with the electric trolling motor.  We had only fished about 150 yards when we saw a big fish blast into a school of bait fish. As we neared that spot we saw why fish were there. A small break in the levee was allowing water to flow between a lake and the canal. It was perfect fish habitat.

I cast toward the small break and immediately hooked a strong fish on my plastic minnow tipped with a small piece of shrimp.  The fish escaped. Then I cast again and hooked another fish. Todd shouted, “I’ve got one too.”

My fish was a nice black drum. Todd’s fish was a big redfish. I got my drum into the boat at the same moment that Todd’s line broke. But he was fishing a poppin’ cork with a heavy three-foot leader below the float.

“He’s still hooked under the cork”, said Todd. The float was submerging and moving. I grabbed another rod equipped with a jig. I cast past and in front of the moving float. My hook caught the leader under the float and I handed the rod to Todd.

“Finish catching your fish,” I laughed.  Soon we had a big redfish in the boat.

Fish were really congregated at the little water break. We called C.J. and Brandon to come anchor by us. Several nice keeper redfish were caught and about a total of 20 black drum of all sizes. Louisiana has a minimum length limit of 16 inches on black drum so most of them we released.

C.J. and Brandon thought it was cool how I had hooked Todd’s redfish under the float. But it wasn’t my first rodeo. Numerous times I have seen poppin’ corks moving and submerging in our bays. It usually means a redfish had broken someone’s line and heart.

Years ago, I was guiding my wife, Beth, daughter Teresa, daughter-in-law Elisabeth and granddaughter Demaris in a women’s tournament called Babes on the Bay. We had caught only a few fish when I spotted a swimming float.  Demaris made a good cast and hooked the float. The big redfish was very rested, and he took off like a torpedo. She fought the fish well and got him beside the boat. I made a move with the landing net, missed the redfish and knocked him off the line.

“Daddy-o,” she said.  “You missed my fish. I would have won the junior division of the tournament”.

I haven’t heard the last of that blunder yet.

We eventually moved on down the canal but caught no more fish, except for a big gar caught by C.J. We did see some alligators, one being almost 10 feet long.

By 1:00 PM it was getting hot and time to go home.  It had been a good morning in the Louisiana coastal marsh with the shrimp, crabs, gars, redfish, black drum, birds of all descriptions and alligators. I love Southern Louisiana.