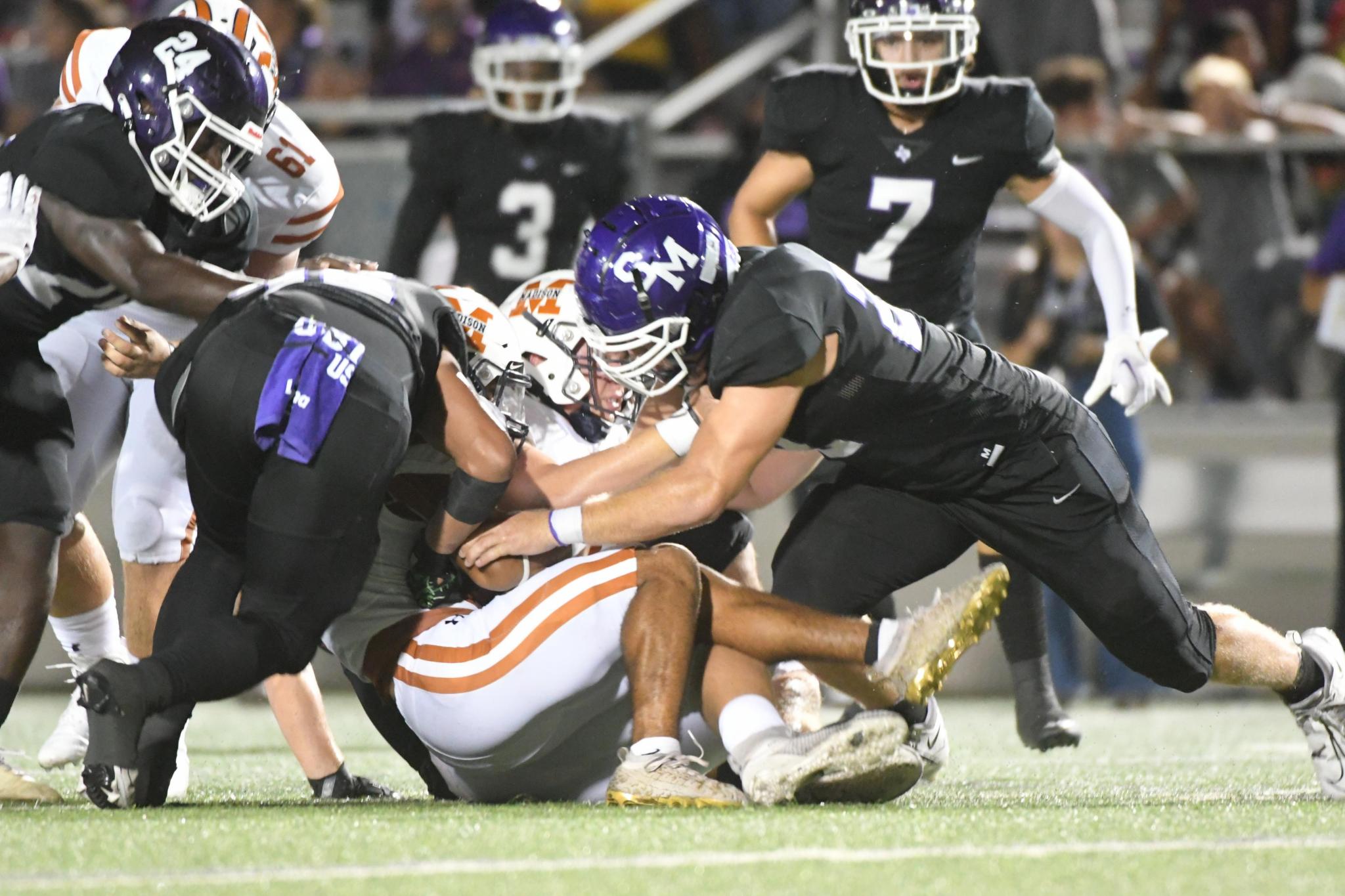 San Marcos faces New Braunfels in a key district matchup as the Rattlers look to make the playoffs. The Rattlers and Unicorns meet Friday at 7:30 p.m. inside San Marcos Toyota Rattler Stadium. Above, the San Marcos defense makes a tackle during its game against San Antonio Madison. Daily Record photo by Gerald Castillo

The hunt for the playoffs continues for San Marcos with the Rattlers needing to win one of their last games to qualify for the postseason.

In the final home game of the season, the Rattlers will square off with one of their oldest rivals in the New Braunfels Unicorns in the 70th meeting between the two teams.

However, San Marcos will be taking the field without head coach John Walsh who is currently serving a five-game suspension handed by the UIL regarding alleged recruiting violations.

Taking over for the Rattlers is defensive coordinator Kurtis Kloiber who will serve as the interim head coach until Walsh’s suspension is up.

For Kloiber, he wants to be similar to his predecessor while also standing out on his own.

“I just want to be the best version of John Walsh as I can be,” Kloiber said. “I’ve been working for [Walsh] for a long time. I know who he is, what he stands for, and what he wants to do in situations…but at the same time I still have to be myself.”

This season for New Braunfels has seen its share of ups and downs with the Unicorns knocking off Denton Ryan in the season opener but losing to New Braunfels Canyon in the Wurst Bowl.

Kloiber said the Unicorns are still an excellent team that should be taken seriously despite what their record says.

“Coach Mangold has done a really good job over there,” Kloiber said. “They had a really big win over Denton Ryan who was at the time the number one team in 5A Division I. Then they had some losses to New Braunfels Canyon, Pflugerville Weiss, and Cibolo Steele who are some really good football programs.”

Leading the Unicorns passing attack at quarterback is Leighton Adams who has thrown for 2,117 yards, 24 touchdowns and four interceptions.

Helping Adams is the duo of both Landon Marsh and Lance Beeghley with Marsh leading the team receiving with 595 yards and six touchdowns, while Beeghley leads the team in receiving touchdowns with eight along with 594 yards receiving.

The rushing attack is led by Tyree Johnson, who is the leading rusher with 616 yards and four touchdowns on 113 carries.

One of the keys to stopping the New Braunfels offense is ramping up the physicality of the defense which is something San Marcos against Converse Judson last week.

The 1982 game remains the last time the Rattlers have defeated the Unicorns winning a 18-16 slugfest.

The rivalry then took a seven-year long hiatus before the two teams met again in 1990 and 1991 with New Braunfels winning both games.

Between 1992 and 2011, the two teams took a 19-year break from playing each other in the regular season with a notable exception in 1997 where the Rattlers and the Unicorns met in their only playoff matchup with New Braunfels winning 27-21 in the Bi-District round.

The two rivals returned to play for the 2012 season and have not missed a beat since playing eight out the 10 years.