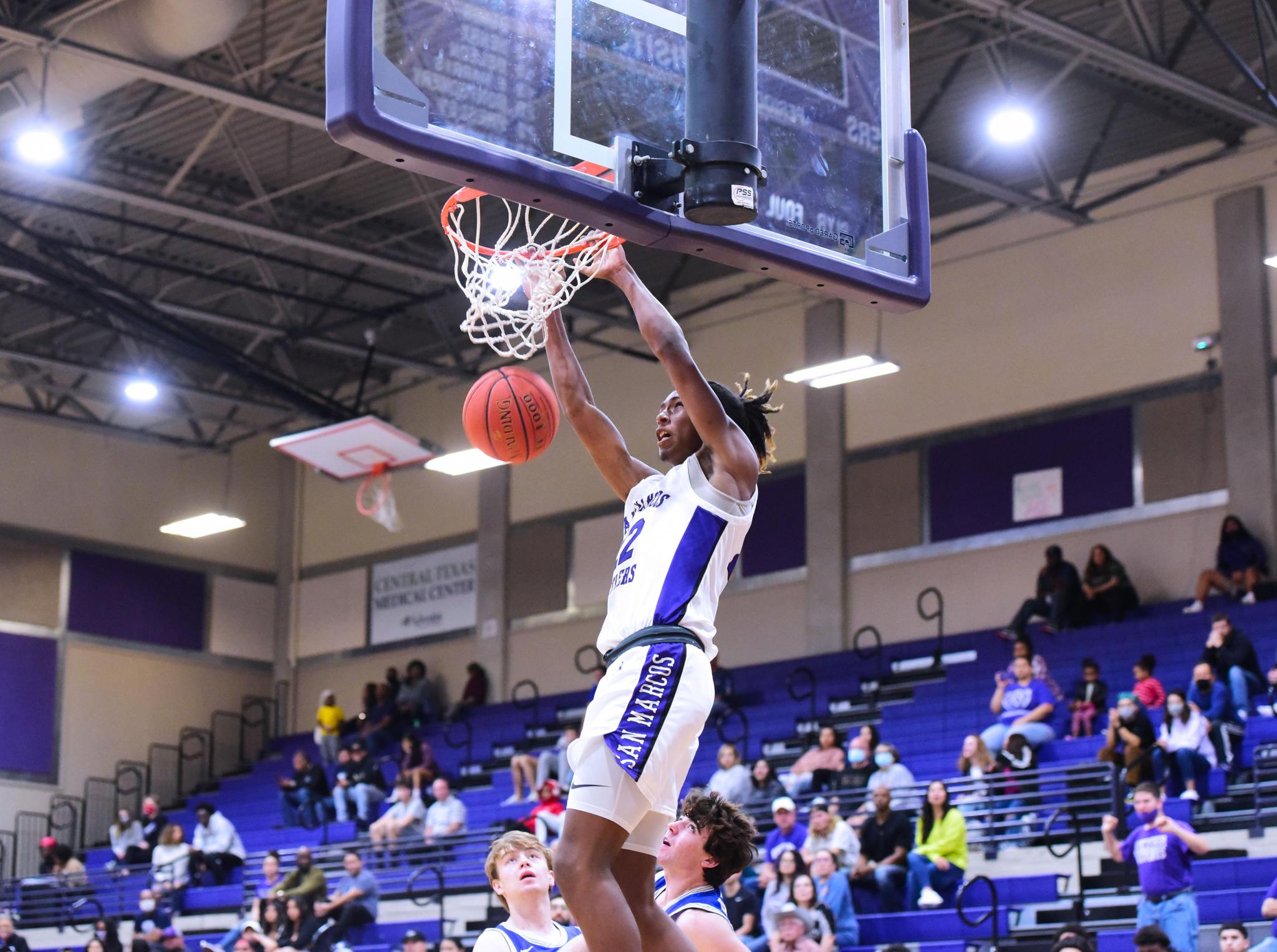 The San Marcos boys’ basketball team competed at the Texas Association of Basketball Coaches (TABC) Showcase over the weekend in Duncanville, playing against some of the top teams in the state.

The Rattlers were a bit shorthanded, with a few of their multi-sport athletes preparing for the upcoming football season. But even while fielding a roster of eight players, the team took a 66-65 win over Houston Legacy on Friday, with senior guard Jayven Cofer sinking a game-winning shot just before the final buzzer.

Head coach Dan Miller was impressed by the win, believing Houston Legacy had four NCAA Division I prospects on the roster. He was also impressed by Cofer, who transferred to San Marcos entering his junior year in 2021, but wasn’t eligible to play on the varsity team last season due to UIL rules and instead spent the year with the junior varsity team. The TABC Showcase allowed the purple and white coaches, as well as Cofer himself, to see how he’ll fit in with the varsity squad this year.

“Jayven had a great weekend and he has had a great couple of weeks before that really, you know, figuring out his identity in our program. And he’s worked so hard on a lot of little things in his game that will help a lot and he’s bought in so much,” Miller said. “He just brings that third guy who can really be a threat offensively but also does a lot of the little things: takes charges, gets to 50-50 balls, rebounds, drives it hard coast-to-coast when he can and gets to the rim. And it’s just so good when you see him in that role.”

The experience also helped San Marcos get exposure in front of many college recruiters. Cofer, as well as four-star wing Malik Presely and three-star guard Kaden Gumbs, had played in similar events before, such as the Nike Elite Youth Basketball League, but several of the other Rattlers hadn’t.

Cofer impressed enough to receive his first D1 offer on Sunday from the University of Maryland, Baltimore County — the school that became the first No. 16 seed to defeat a No. 1 seed in the NCAA tournament by beating Virginia in 2018.

“I know I’m getting a few more calls from small Division I schools about (Cofer), so I think there might be some more small Division I’s come in,” Miller said. “(Some players had) never seen anything like that other than the last year we were at TABC. So I think they enjoyed that as well and they all had their moments, you know, especially (junior guard Zyair Jolivette). He hit a big 3 for us to put us up in the (Houston Legacy) game before Jayven hit that game-winner. But he put us up and they came down and scored, but Zyair hit some big shots in the tournament and he took a big step, also.”

The Rattlers fell in both of their games on Saturday, losing to reigning UIL 6A champion Duncanville, 92-64, and reigning 5A state champion Beaumont United, 67-45. Miller said Presley, the team’s leading scorer last season, was playing on a sore foot in the team’s first two games of the weekend and that they chose to sit him in the Beaumont United game to avoid overextending him, leaving them with just seven players available.

But Miller thought there were stretches in both losses where both teams looked like they were on an even level — for instance, Gumbs scored 31 points against Duncanville.

“Texas State is getting a special one,” Miller said of Gumbs, who made a verbal commitment to the Bobcats in May. “And they know it, they know they’re getting a special point guard. You know, I saw him make up a couple plays and I just looked across and saw Bruce Pearl out of Auburn just like, I’m pretty sure, asking like, ‘Who is that guy?’ And everyone’s like, ‘That’s the point guard going to Texas State.’ So hat’s off to Coach (Terrence Johnson) for just doing a wonderful job recruiting that guy.

“But it was a great experience for our guys … The biggest takeaway for our guys is, for a lot of those games, we played with the best teams in the state. We’re not that far away but we’re not there yet, which just gives us more motivation to get back in the gym, back in the weight room and just try to reach that level. Because this team has a chance — our team, we really believe, has a chance to be very special. And what’s most important to me is that we’re playing our best basketball in February of 2023, not necessarily June 2022. So I feel that this was a good lesson for us and we will learn from it.

Miller said the team has two main goals for the 2022-23 season: to win a district title and make a deep run in the playoffs. After playing at the TABC Showcase, the Rattlers are more confident they can accomplish both.