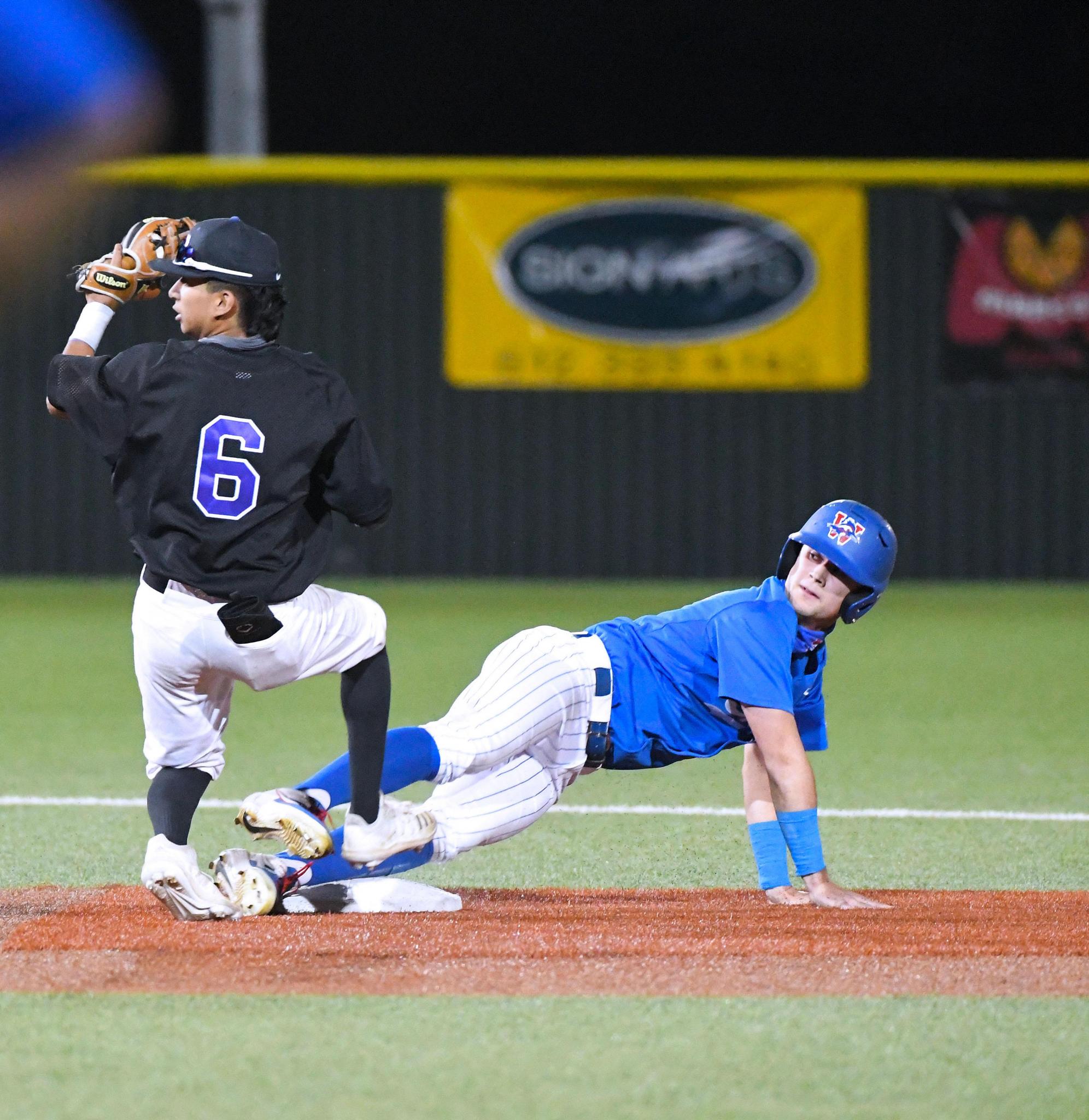 San Marcos has had trouble getting over the hump against the top teams in the state.

Opening your schedule against No. 1 Lake Travis and then following it up with the state’s No. 8 6A team in Austin Westlake is a challenging task for anyone, especially when you believe you have a chance to win.

The Rattlers fell one run short of defeating the Chaparrals in a nine-inning district matchup, after tying the game 3-3 at the bottom of the seventh. Westlake — with its potent batting lineup — finally broke the slump in extra innings, snatching a 4-3 win over San Marcos on the road.

“I think we got caught up in winning tonight. Trying too hard,” head coach Bryan Webb said. “I will never say our kids don’t try because they battled their guts out, but we got caught up in it a little too much tonight and I just want them to go out and compete and, you know, if you lose a ballgame because you competed full force, you do it. I mean, when you leave it out there on the table like that, good teams are eventually gonna catch up and beat you. They got us tonight and there’s a reason they’re ranked No. 9 in the state.”

Freshman pitcher Reagan Chomel pitched a strong outing starting off the game, sending three of the Chaparrals’ first four batters back to the dugout on strikeouts. Chomel followed his hot start on the mound with his offense, by connecting on a RBI single to left field, giving San Marcos a 1-0 lead.

Controversy struck in the top of the third as a shot was hit to third baseman Johnny Pardo, who threw it to first baseman Stephan Wilder and was forced to make a bang-bang play with the runner. The umpire signaled that his foot was off of the bag allowing a runner to score and give Westlake a 2-1 advantage. Head coach Bryan Webb protested the call but to no avail — the run stood. In the fifth, a spitting image of the play happened to sophomore outfielder Ryan Hix. This time the umpire called Hix out at first, frustrating Webb again.

The scoring went silent for four innings as both teams were able to get runners on but none were able to capitalize on their opportunities. However, San Marcos was able to turn runners into a score when they needed it. In what would usually be the final frame, the purple and white finally got a runner across home plate tying the game up 3-3. An inning of scoreless baseball led to the top of the ninth where Blake Peterson drove one down the gut of the Rattler defense and brought in the game-winning run.

“They’re fighters. They fought all the way through and Westlake’s got a couple good guys on the top of that order. They beat us on some pitches and there’s a reason that those guys are going where they’re going to play at school and college and you can’t hold a team like that down. You’re not going to shut them out and we pitched well enough to win this ballgame,” Webb said confidently. “It was just just the ninth inning here, you know, that kid came up but he’s a Texas commit, he drove the ball right back up the middle and he hit a good pitch.”

There is a direct correlation between San Marcos’ plate production and their record. In losses this year, the team strikes out 10 times on average, whereas in wins, it strikes out 5.83 times per game — almost half of what they do in games that they end up losing. Against Westlake, the Rattlers struck out 14 times and only lost by one run.

Only Chomel, Hix and senior outfielder Moises Alva were able to connect the ball to bat and get hits. Chomel pitched 4.0 innings with six strikeouts, four hits and gave up one earned run. Pardo also found success on the mound with six strikeouts in 5.0 innings of work.

San Marcos (12-5-2, 0-3 district) has a chance to write its wrongs on the road at Westlake (15-3-1, 3-0) this Friday with the first pitch set for 7 p.m. The difference in plate execution will be the determining factor between a sweep or a split between the two teams.

“We just gotta go in there, we got to put the ball in play. We’ve got to cut down some strikeouts. We had way too many strikeouts in key spots tonight and I just want to see them go compete,” Webb said. “We don’t talk about winning, we don’t talk about losing, we just talk about competing.”