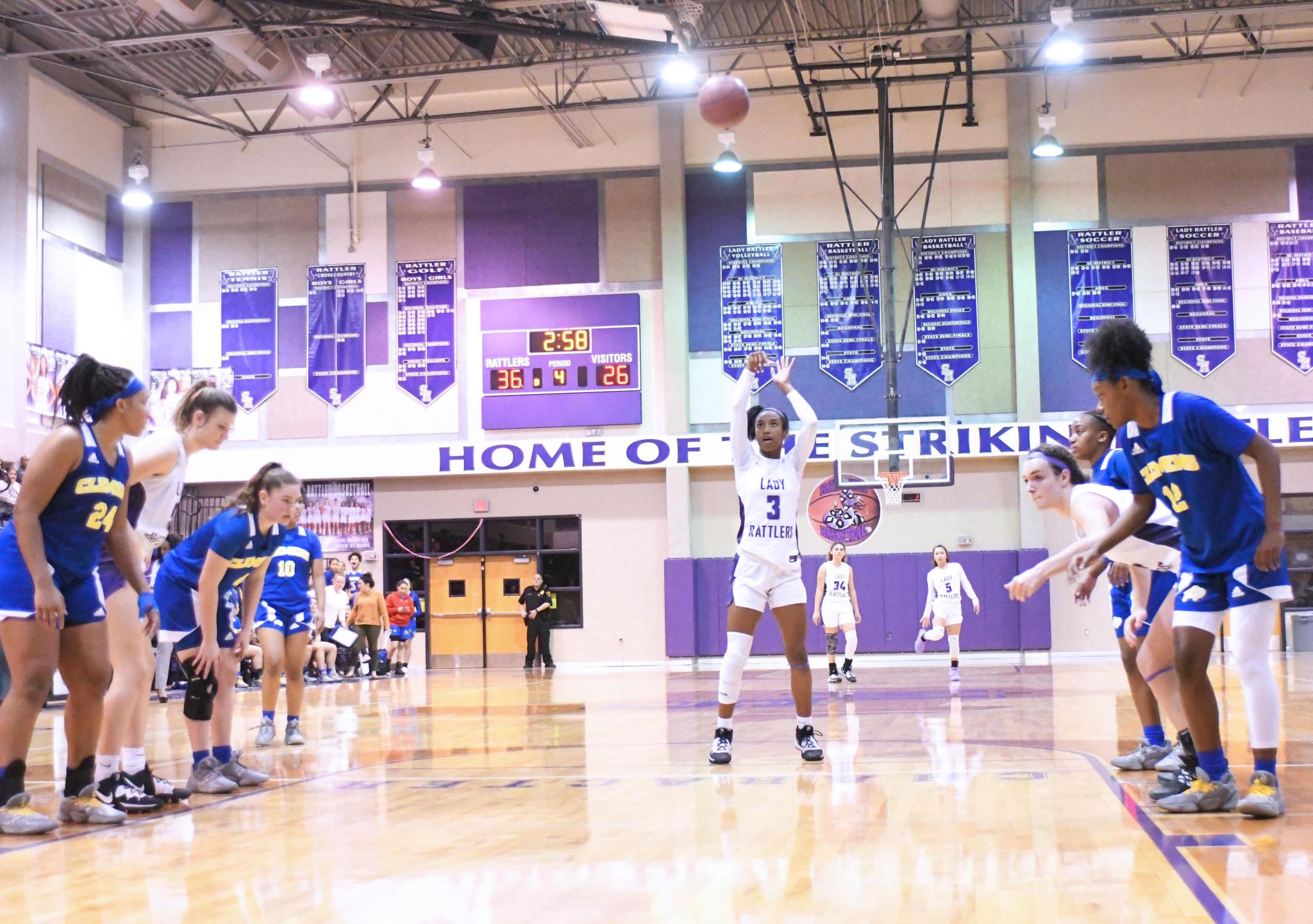 No blood. No foul.

While both teams were playing for different objectives, they each brought the most competitive version of themselves to battle. Five different players were handed technical fouls, which slowed the momentum of the Lady Rattlers in the fourth quarter.

“We talked to them about that, keeping their composure, chippy game or not,” Kendall said. “A lot of them step up and help each other with that and I thought they were doing that tonight, helping each other stay composed out there.”

The Lady Rattlers found a rhythm from deep as four different players hit a 3-pointer in the win with the most impressive coming in the second quarter. Junior guard Kayla Presley crossed her opponent, which left the defender reaching for the ground trying to keep her balance. Presley resorted to a step back as her man lost her shoe and drilled the 3, leaving the score at 16-11 and the Rattler crowd jumping out of their seats.

“All I know is that I saw her reaching and as soon as I saw her go I had to snatch back,” Presley said. “I thought about it and I didn’t realize she had fallen at first but all I heard was, ‘Oh shoot her shoe!’ I looked at it and I shot it and I stared her down.”

It was only one of the five 3s the team hit in the first half. The rhythm the players caught from range rewarded San Marcos with a 21-17 lead heading into the half.

Both teams hit a scoring drought for three minutes to begin the third quarter. “We need to score,'' Kendall yelled from the bench. Finally, junior forward Faith Phillips went to work and scored or assisted on seven-straight points, giving a 28-17 advantage to the purple and white. Clemens didn’t record a score until 1:48 sat on the clock— their lone bucket of the quarter.

When San Marcos went cold, Phillips made it happen on the inside.

“I think I was just getting good position and trying to get second-chance points,” Phillips said about her scoring output. “We were trying to hit 3s because they were falling in the first half but if they weren’t gonna fall I was gonna be there to get them.”

Trailing at the start of the final quarter, the Lady Buffaloes put on some full-court pressure. But a little too much hand-checking led to double technical fouls and the ejection of players from both sides. The same happened again later in the quarter as players had to be separated with 3:38 left.

Clemens’ tough defense helped them come up with four consecutive stops and cut the lead down to 36-26 but San Marcos kept its composure for the most part and was able to steal a win at home for the last time this season.

Presley and Phillips both finished with a game-high 12 points. Phillips did her dirty work on the glass leading the team with ten rebounds, as Presley did a little bit of everything for San Marcos. The junior had five rebounds, two steals and two assists on the night.

For the seniors that make up the Lady Rattler roster, Friday night’s game was the last time they would play inside the Snake Pit.

“I’m glad that I ended my senior season at home with a win and I’m very excited,” senior wing Miranda Lamb said. “Obviously, (I’m) very emotional but I’m happy that I had my team with me.”

San Marcos will go to battle for the final time when they take on New Braunfels on the road at 7 p.m. this Tuesday. It will be another bittersweet night for all parties involved.

“It’s gonna be very, very emotional. The seniors and (Phillips) were the people who took me in quickly whenever I came to San Marcos,” Presley said. “I built a bond with them and they each have a special place in my heart and it is going to be so hard knowing this is my last game with them. But I know we’re going to be going all out.”