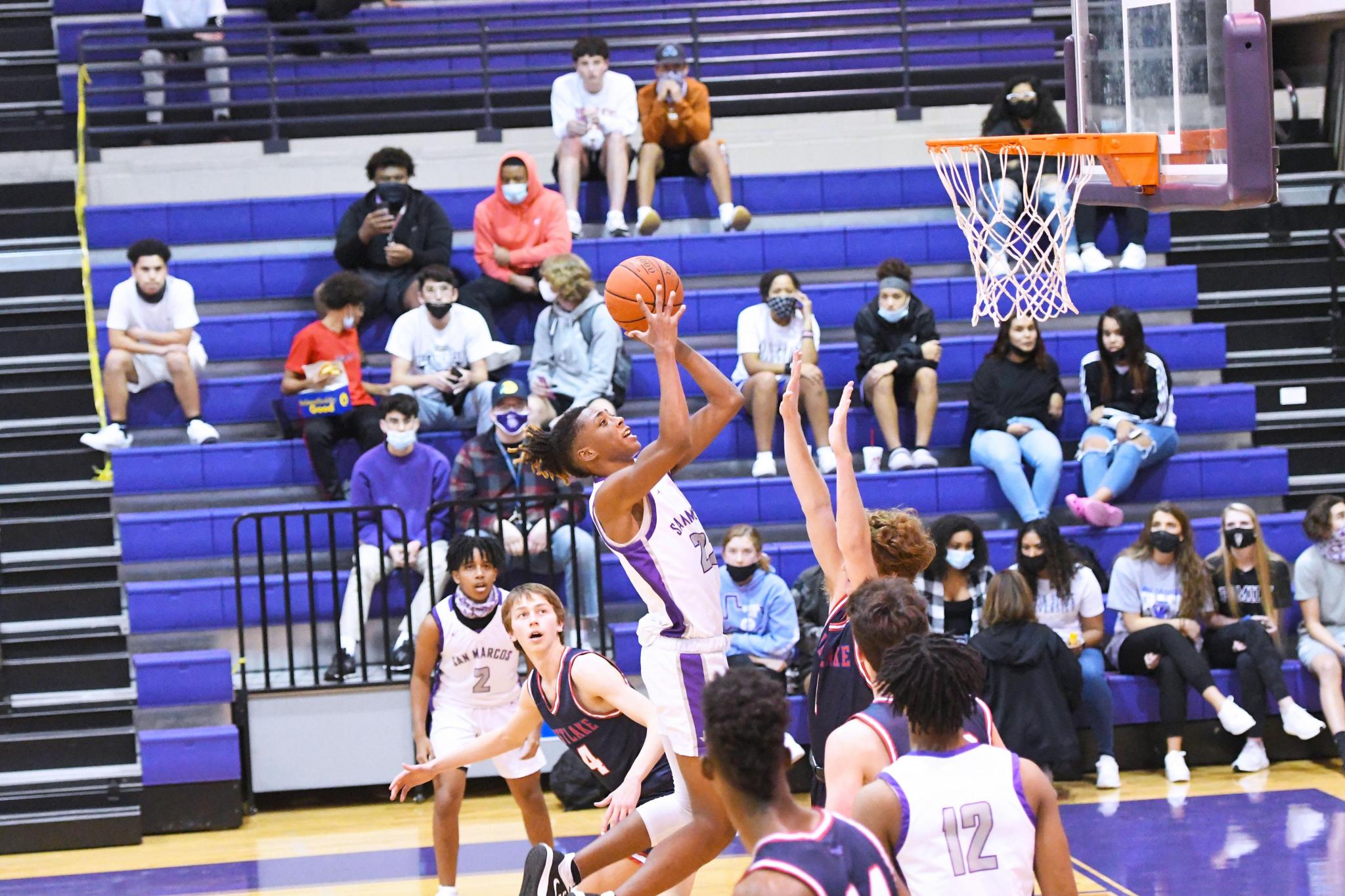 San Marcos and No. 6 Austin Westlake put on a show Tuesday night when two of the top players in the state in Rattlers sophomore forward Malik Presley and Chaparrals No. 45-ranked prospect and Kansas commit K.J. Adams squared off.

The stars came to play, scoring 54 points combined in a fast-paced game inside the Snake Pit. After a close one through three quarters, Adams and Westlake pulled away 72-60 after a run in the fourth ending San Marcos’ hopes to upset the two-time district champs.

Adams opened the game up with two monster slams, announcing his presence in the gym without words just by shaking the rim. Presley retaliated by scoring on smooth mid-range pull-ups, like his first bucket of the game, getting Adams to fly past him then knocking it down from 15 feet out. The two scored 17 points together in the first quarter, leaving Westlake ahead, 20-16.

“They are two really good players, you know, they are some of the best players in the state, regardless of classification,” Pinchback said. “(Adams is) a good player. But we got some good players, too. So when we’re young, we’re just gonna have to learn how to play this and put four quarters together and when we do that it’s going to be something serious.”

The hosts did a good job containing Adams in the second in large part due to him picking up his third foul on a charge call with 2 minutes left of the clock caused by none other than senior Grayson Harris — the first of five charges Harris would earn. Westlake withstood the run by its opponent as the team ran into the break up 30-27.

The Chaps started off the third quarter shooting 3-3 from the field, inciting a 8-0 run in the first two minutes of the quarter. Finally, sophomore guard Kaden Gumbs broke the lid covering the rim with a strong drive to the basket. Usually on your birthday, you receive presents. But Presley, who turned 16 Tuesday, just kept giving out buckets to anyone who stepped in his way. He got to the basket early, but now the forward extended his range from the left wing to give him eight points in the third quarter.

Harris put his body on the line again against Adams deep in the third quarter and won, forcing the Kansas commit to start the fourth watching from the sidelines. The purple and white had the Chaps on the ropes, only trailing 54-50, but the team went cold again, missing some good looks from deep as the Chaps remained solid with a 7-0 run, extending their lead. At the same time, San Marcos struggled to stop the inside force downlow in the end, allowing second chance points that effectively ended the night, 72-60, in Westlake’s favor.

“We just gave a couple of buckets down to K.J. Once they had that little lead, we had to cut into it. We gotta keep chopping wood, you know, this game is a long game. It’s full of ups and downs, it’s all about runs. They make a run, we make a run and so we just learn to control it and not panic in certain situations. But I mean they’re a good team, but so are we,” Pinchback said.

“They just stepped up and took it personally and got after it and started flying around a little bit and there’s nothing that we can do as coaches. You know, we coach during the week and all that, it’s all about the effort of the kids and making plays and they turned up their play a little bit and it showed. We just gotta sustain that and keep, keep chugging along, and keep chopping away.”

Presley finished with 25 points, a steal, a rebound and an assist. Gumbs followed his scoring partner with 15 of his own with four assists.

But with the loss, San Marcos has dropped its last three in district play, which puts the pressure on the team heading into the next set of district games. The Rattlers have a chance to get back on the winning side of things as school rival Buda Hays (6-13, 1-5) visits inside the Snake Pit this Friday at 7:30 p.m. San Marcos took the last matchup, 68-61, but both teams were without key pieces. Pinchback expects an even more competitive matchup from these two teams.

“It’s a big rivalry, they’re getting their players back, we’ll get Kaden back. So let’s find out,” Pinchback said. “You know, we gotta do what we’re supposed to do to maintain and try to get to a playoff spot and that’s what we’re gonna do. We’re gonna focus on the opponent at hand and try to go 1-0 every game.”