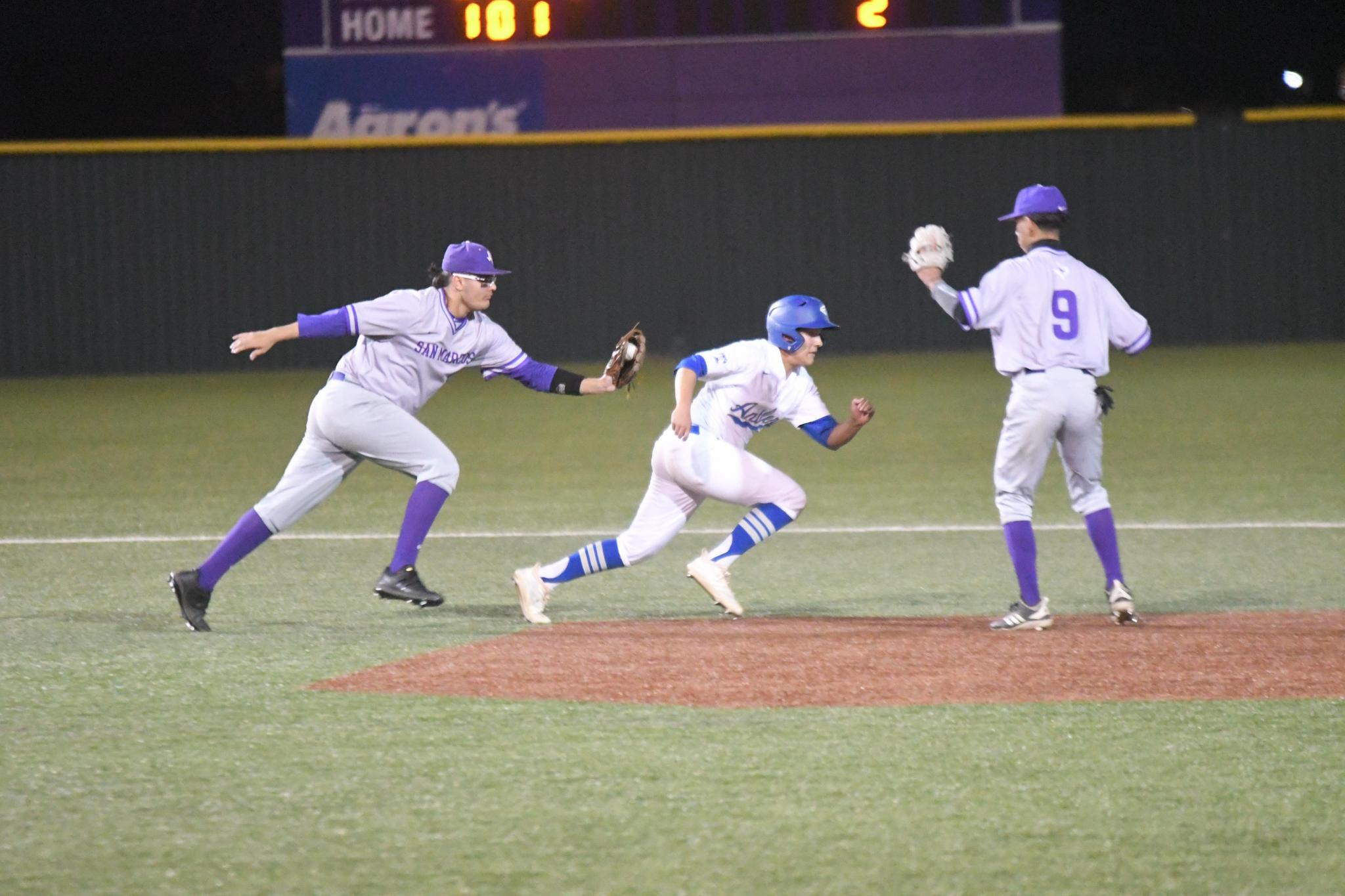 San Marcos and Buda Hays continue to show why they are rivals. With the realignment of district play, these teams hit the diamond as non-district opponents for the final time Friday night before they reunite next year as 26-6A opponents.

After a three-run first inning, Hays let the Rattlers know they were here for business. The hot start set the tone for the rest of the game in a 6-1 loss for San Marcos as the Rebels fans and bench were pointing to the scoreboard each time the purple and white community had something to say.

“They took it to us early. We came out and tried too hard, we were trying to do too much and kind of got caught up in our own selves,” head coach Bryan Webb said. “I told them, ‘We gotta quit tripping over themselves and making the game harder than it already is.’ We just, we made some mental mistakes that turned into some runs and we walked some guys. And you know, they came out hot and they were ready to go and we were a little bit in shell shock.”

It took less than two outs of play before the Rebels head coach James Howard was called onnto the field for the team’s heckling from the dugout.

Senior pitcher Gage Mason struggled to find a rhythm walking his first two batters at the plate, followed by giving up consecutive hits that put the Rattlers behind the curve. Mason started to relax as time went on. He was able to force Hays into a three up, three down situation in the 2nd but the trash talk in the dugout continued. Anytime Mason threw an inaccurate pitch, Hays let him hear it.

The senior only gave up one more run before being relieved, handling the pressure pretty well. San Marcos had opportunities to rally back into the game, especially in the bottom of the third. Senior shortstop Isaac Gonzales got the first hit of the night for his team and back-to-back walks set the Rattlers up with bases loaded and only one out. Junior Kannon Webb came up with an RBI after the fielder’s choice. The lead had been cut to 4-1.

For the first time in the game, both teams went silent and the scoreboard ironically did the same. Neither was able to come up with any runs until the top of the fifth when the Rattlers had trouble making plays in the field.

Senior right-handed pitcher Ryan Wilder came in and started his pitching stint with a strikeout. Hays responded with a hit that looked like it would give the hosts their third out, but a dropped ball at first kept the inning going and rewarded them with their final two runs of the game in a 6-1 win over San Marcos.

Bryan Webb knew the stakes were a little bit higher in this game than just any regular exhibition. He wants his team to see tough matchups like that in order for them to be ready in district play.

“It's an early-season playoff district type atmosphere and we want to put our kids in situations where we're going to be in a couple of weeks when it really starts counting and you know how you Hays-San Marcos is a good rivalry and it's kind of grown over the past 10 to 12 years,” the head coach said. “It’s good to see our kids when the heat's on. Playing a 12 o'clock game against nobody you really know, it's a baseball game but you know when your rival eight miles down the road comes down it kind of turns up a little bit and you know it's fun.”

San Marcos returns to the diamond and will take on Odessa Permian at 2 p.m. and San Antonio Warren at 4:15 p.m., bringing the tournament to a conclusion for the hosts. Webb believes the team’s complete game will all come together soon and for now, his focus is turning runners on base into runs.

“Our defense will come around, our pitching will come around. We’ve just gotta have better approaches with runners on and just keep driving the ball,” Webb said. “We’ve hit balls that have gone right to people. We’re a little snakebit right now and I told them, ‘In San Marcos, you don’t get luck. You gotta make luck and we gotta do everything the hard way and the tough way.’ That’s a typical San Marcos team and we’ll get everything turned around.”