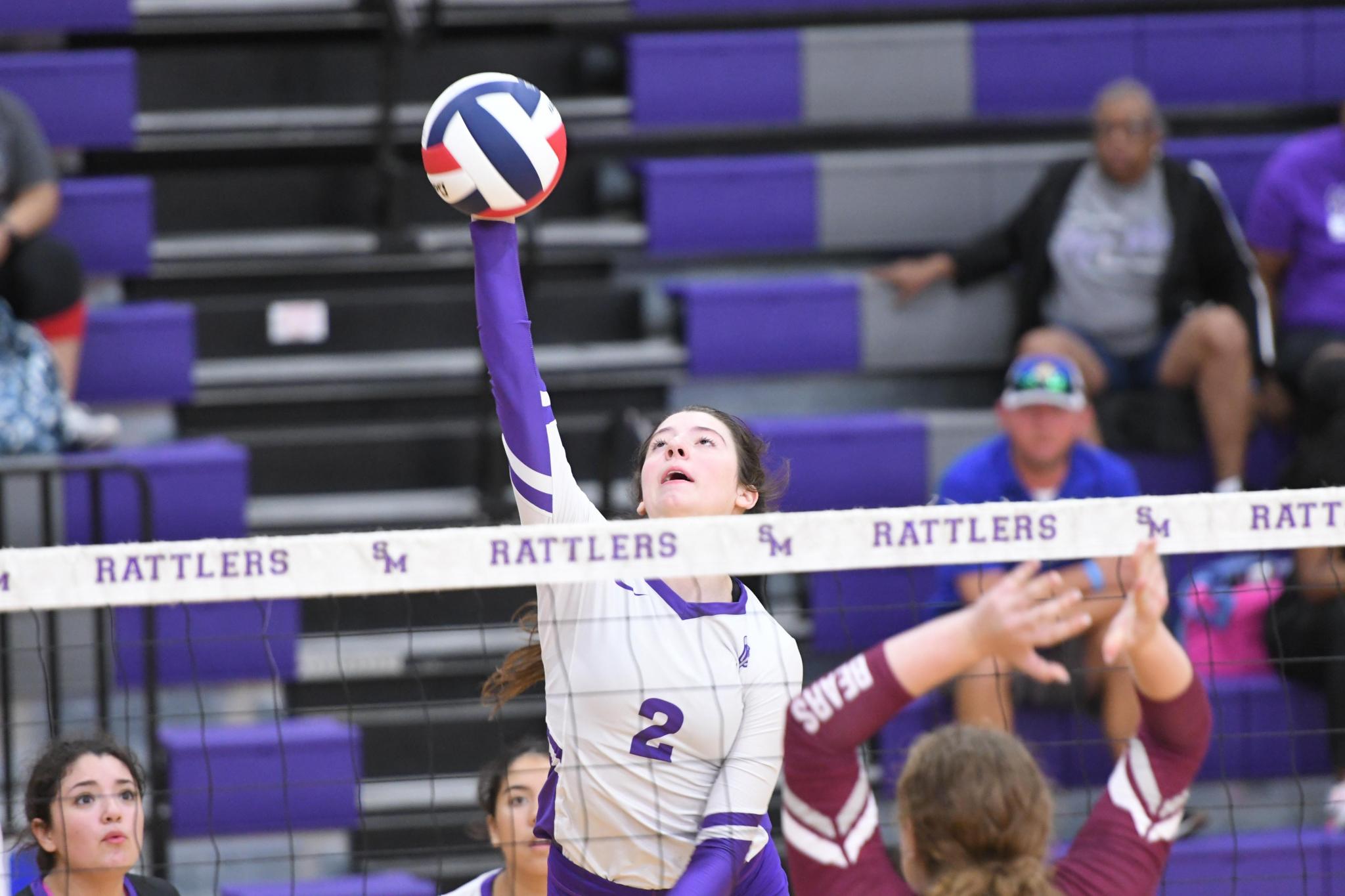 San Marcos’ season came to an end as the Rattlers fell to the San Antonio Clark Cougars 3-0 (25-17, 25-15, 25-19) in the Bi-Distict round of the playoffs. Above, sophomore outside hitter Brinkley Reeves hits a ball over the defense during a match earlier this season. Daily Record photo by Gerald Castillo

The high point for Head Volleyball Coach Megann Ollett was the fact the team refused to back down from the highly touted Cougars when things started to turn south.

“They (San Marcos) rallied really well,” Ollett said. “We struggled all season about getting down but they fought really well through a lot of those moments to stay in the game and keep fighting through the end and not giving up which they could have easily done.”

The key for Clark’s win was the fact the Cougars were continuously in rhythm which kept San Marcos from finding theirs.

“We could not get them out of the system,” Ollett said. “They kept us out of the system which allowed them to trap and block us a lot. That left some of our strongest hitters with a huge block especially when you have a 6-foot-4 girl in the middle. That was a huge detriment to our offense especially with our setter not having any room to have any options.”

But despite the loss, the Rattlers had some players standout as they fought to stay with the high powered Cougars.

Ollett also complimented the underclassmen for stepping up in an intense situation and refusing to back down from the competition.

“Our three freshmen stepped up in a role where they could have folded but they didn’t,” Ollett said. “They continued to play without fear.”

The Rattlers will graduate nine seniors from the program that helped the team qualify for the playoffs three consecutive years while finishing with a winning record.

By laying down the foundation, the seniors have left a lasting legacy that will allow the underclassmen to reach even further heights according to Ollett.

“They showed that they take pride and showed care about their program,” Ollett said. “They want to see it continue to grow. They love the kids that are following up behind them and that they want to keep that tradition.”

As for the said underclassmen, the Rattlers will have a good returning group as they look to qualify for the playoffs for the fourth consecutive year while also winning a potential district title.

Though the Rattlers will have a lot of work to do, Ollett is excited for the future of the San Marcos Volleyball program.

“I’m excited to see where the freshman and sophomores grow in with the experience,” Ollett said. “They are an athletic group and my goal is to be consistently firing the ball and keeping the defense in system …I’m ready to get back into the gym and start preparing for next year and see how far we can go.”