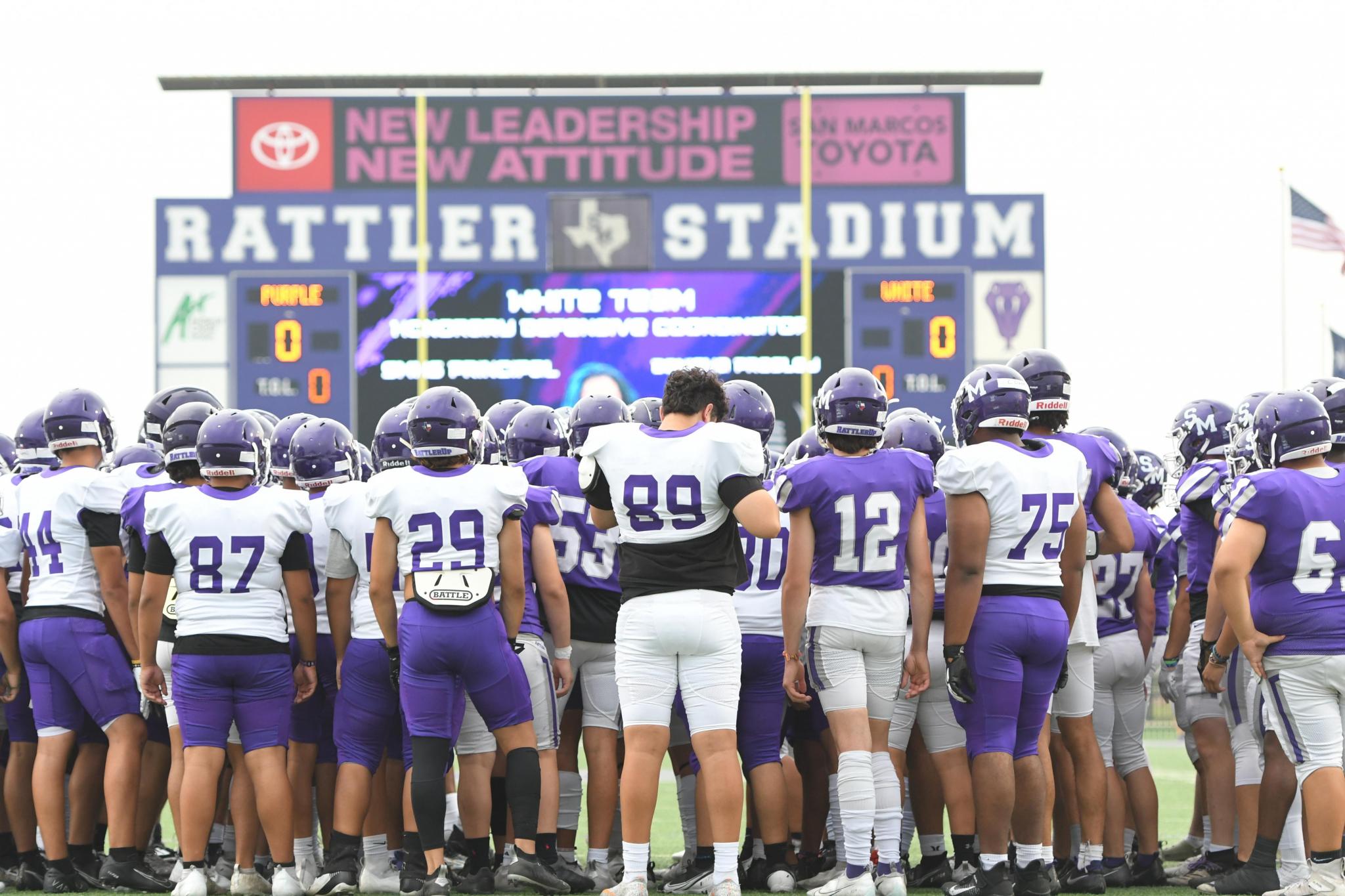 San Marcos goes down to the wire in 2022 Spring Game

San Marcos’ Spring Game was a dream turned into reality.

The coaching staff had four weeks to prepare for a sneak peek of next year's roster and to make the end-of-camp scrimmage fair, they split the Purple and White teams as evenly as possible.

The coaches did their job well, as a the White team edged out Purple to come away with a 32-31 win.

“When the coaches do their job and make the teams right, and the kids compete, have a good time, then you end up with a score like 32-31. So that's the head coach's dream right there.”

On the final play of the Spring Game, White team junior running back Jake Rodriguez-Scholz made the executive decision to try to win the game himself. After scoring the touchdown that cut the deficit to one, the White team went for a two-point conversion and the win on an end-around read-option play called by the offense.

.@RattlersSM ‘23 QB Isaiah DeLeon (@imd_14) and RB Jaidyn Brown (@JaidynBrown_2) talk today’s spring game, what it was like playing on opposing sidelines and more below. ⬇️

“(Rodriguez-Scholz) was supposed to come around and hand it off to (freshman wide receiver) Tony (Diaz) on a reverse,” White team junior quarterback Isaiah DeLeon explained. “Tony would either throw it to me or run it in. But before the play, Scholzy said, ‘I'm just gonna keep it,’ and then he ended up keeping it and scoring.”

The touchdown sealed the fate of the Purple team as White pulled off a comeback win. But both sides found small victories throughout the night. DeLeon, who’s been at San Marcos all three years of his career, said he’s seen the talent pool increase around him.

“I just think the overall depth at every position (has improved). We’ve got guys that can come in and contribute if somebody goes down,” DeLeon said. “Just like today, we split the two teams up and I think either one could have probably competed at the varsity level, so it’s exciting.”

Mentioning the depth, another connection that impressed was between freshman quarterback Braydon Heyward and sophomore quarterback/receiver Kutter Gage Webb. Heyward completed a 34-yard pass not once but twice during the scrimmage.

They weren’t done helping the purple offense move the ball. A 19-yard touchdown from the two underclassmen tied the score at 17-17 going into the third and final period.

The two teams returned to the field after a 15-minute break. Purple took no time going to its stud in junior running back Jaidyn Brown, as he caught a screen pass which he took to the house for a 55-yard receiving touchdown. The drive took just three plays and gave Brown's team a 24-17 lead with 8:29 left in what would be the final period.

“It was pretty tough,” Brown said. “I had to work with another quarterback to build our chemistry. It was kinda hard not playing with my starting QB because we already have that chemistry.”

DeLeon mentioned on his sideline, “Dang we can’t stop JB,” as he was the leading force for the team in purple.

That didn’t stop either of them from performing like they usually do. DeLeon found sophomore cornerback/receiver Malachi Ogunbase over the middle on the next drive, resulting in a 27-yard touchdown which tied the game at 24-24.

This time, instead of Brown receiving the touchdown, he was on the other end — throwing a pass to Webb down the right sideline for six points in response to his quarterback's stellar drive, giving the purple a 31-24 lead.

Before Rodriguez-Scholz could end the game with his two-point conversion, DeLeon had to scramble for 20 yards on a 4th and 10 to keep his team alive with about 1:30 left on the clock. That’s when Rodriguez-Scholz did his damage, as White took home the victory, 32-31.

Even though he wasn’t necessarily coaching, Walsh got to take a good look at his squad heading into next season. The Rattlers will move into a new district featuring teams from San Antonio to San Marcos.

“We’re feeling very confident,” Walsh said. “This senior class, when they were freshmen, won that district as freshmen and they know that. I'm excited about where we're going. I think we got a chance if we can stay healthy, and have a great summer. I think we're gonna be a lot better than we were last year and we weren't too bad last year.”