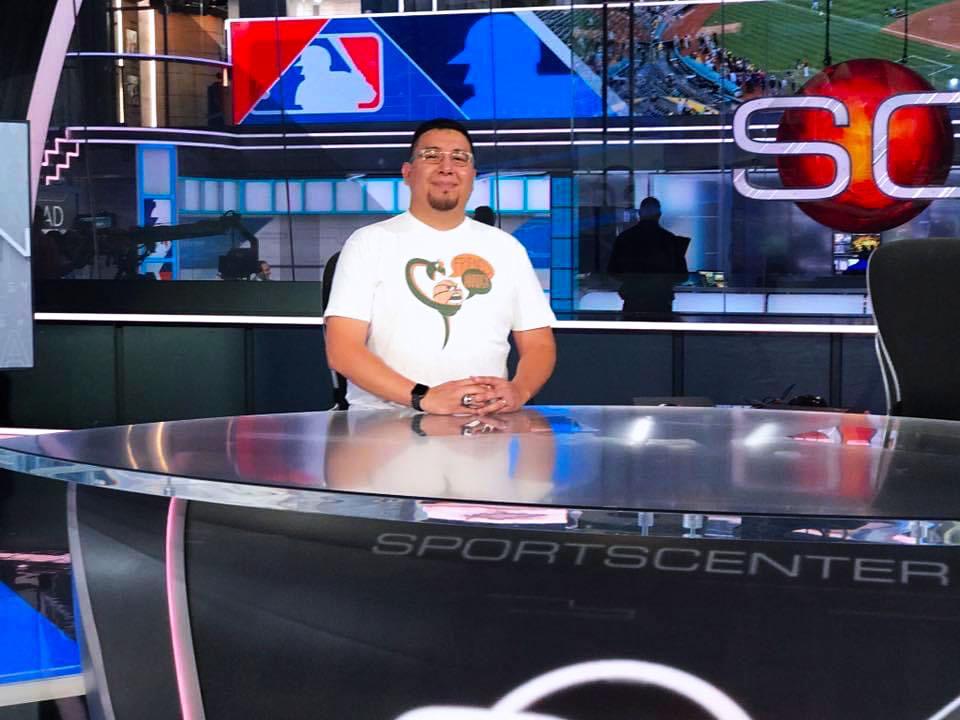 Sports have always been a part of Sean Rosales’ life. His dad usually had a game on TV, just to pass the time. He spent his childhood playing at the little league fields in San Marcos. He played tennis, basketball and football for the Rattlers in high school.

But at a young age, Rosales knew he wasn’t good enough to make it very far as an athlete. He knew he’d have to find a different career path to stay in sports.

July 17 will be Rosales’ five-year anniversary working as a replay operator for ESPN. And on Wednesday, the San Marcos native won his first Sports Emmy.

“Sports has always been a passion,” Rosales said. “I’ve been lucky to make that passion into a reality.”

Rosales, a former member of the San Marcos Rattler drumline, was originally a music major in college at Texas A&M-Kingsville, teaching at a few of the local high schools during his first three years. Heading into his senior year, though, Rosales knew he wanted to get into the sports media industry. He transferred into Kingsville’s journalism department, interested in the broadcasting program.

Two semesters later, he knew he’d made the right decision. He transferred to Indiana University Bloomington to get experience calling games at a bigger school. In 2009, he had the chance to attend the MLB Winter Meetings in Las Vegas, which included a job fair that had listings for entry-level openings from nearly every division of the sport. Rosales thought he’d get his big break becoming a broadcaster for a minor league team or doing pregame shows for a major league team.

“When I was there, between the over-300 job postings they had on this huge wall, there were only two positions for radio. One was part-time for the (Minnesota) Twins and the other was like a free internship for the (Cleveland) Guardians — then the Indians at the time. And it was one of those things like, ‘OK, maybe I should widen my scope here because I’m really just trying to nail down this one thing. Let me look into any other positions just to get my foot in the door.’”

That led to Rosales becoming a video board operator for the Mobile Bay Bears, a Double-A minor league affiliate for the Arizona Diamondbacks. He spent the season with the Bears, then returned to Indiana to finish his degree. Soon after graduating, Rosales got a call from the Diamondbacks’ baseball operations department. The team needed help with its video scouting system and asked if Rosales would be interested. He took the position, thinking he’d work his way up to a higher position in the front office.

“I do a season of minor league baseball with this thing. And again, I think I got this job with the Diamondbacks, next stop is (general manager of the team), it’s all done,” Rosales said. “And then after the season, it was, ‘Hey, thank you for your help. If you need us for anything, for references, just let us know. And just make sure you return the equipment.’ I was like, ‘What do you mean? I’m gonna be back here next year, right?’ And they said ‘No, every season we change out your position.’”

Rosales returned to San Marcos, unemployed. He took a job in South Bend, Ind., where his wife is from, in March 2013 as the video board operator for the South Bend Silver Hawks, a High-A minor league affiliate for the Chicago Cubs. Many of his co-workers were freelancers who worked Notre Dame games in the offseason and helped Rosales do the same. Through his connections at Notre Dame, Rosales was hired by the Cubs in 2016. From there, he moved on to the Big 10 Network, which helped him get his foot in the door with ESPN, where he was brought on as a replay operator on July 17, 2017.

He’s remained in Bristol, Conn., ever since working hundreds of games remotely from ESPN’s campus. Rosales has been a packager for Sunday Night Baseball, college football games, including the CFP National Championship, and the NBA Finals among others — he’s currently working the Eastern Conference Finals series between the Milwaukee Bucks and Boston Celtics.

Rosales was also part of the team that worked on the “Manningcast” during the 2021 NFL season, a broadcast of ESPN’s Monday Night Football that featured former NFL quarterbacks and brothers Peyton and Eli Manning as hosts and aired on ESPN2 and ESPN+. Rosales, along with a few other operators and a producer, would facilitate building video packages before and during the show that were focused on anything from the Mannings’ respective careers to the guests that came on the show to the game going on during the broadcast.

“There was so much lead up to that show and tape-building-wise that the three people in the room had to really work together to make sure everything went off well because there would be anything from 60-80 tape pieces done day-of for the shows,” Rosales said. “And it was always changing because week-in and week-out, it’s a different matchup, obviously, different guest list game-to-game.

“​​But it was a show, like, it was fun. You got to work alongside Peyton and Eli Manning on a football show. Who wouldn’t want to do that?”

On Wednesday, the Manningcast production team won the Sports Emmy for Outstanding Live Series. Rosales had been a part of crews that won Sports Emmys before — though, the teams were usually so large, the award was presented to just “ESPN.” This time, his name was listed as one of the winners.

Rosales has come a long way from playing in the little league fields in San Marcos. He’s still in disbelief of how his career has unfolded so far.

“It was kind of surreal because you do so many events here,” Rosales said. “You know your work is valued because the producers here, the directors here, they always make sure to give thanks to those who will put the production on. And for the most part, that’s all that really matters. Like, am I doing the job for the show? Yes? That’s all that matters. And if anything comes from it, great. If it doesn’t, even better.

“But it’s kind of cool to me, as our group, to be nominated for that award. Especially given that it’s the first year that we really tried to do something like this.”