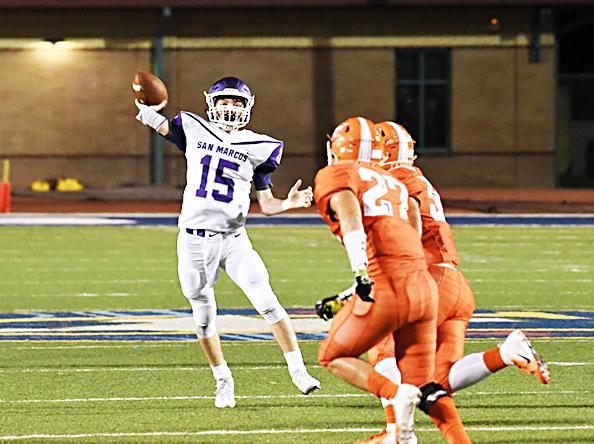 Head coach Mark Soto has run the same practice the Wednesday before district play starts for the past seven years.

He pulls out the mats and makes his players take off their pads and helmets. They speed and tumble across the mats while their teammates cheer them on, waiting for their turn.

The team gets wild.

“It’s tradition.” Soto said. “It just takes you back to old-school effort and enthusiasm and that’s what we believe wins games. So, they get themselves hyped up and gassed up and ready to go, and we attack the mat like its a football field. And we just practice going full speed, reckless abandon and enthusiasm.”

It’s also tradition for the San Marcos to play East Central. The Rattlers have played the Hornets in each of the past four seasons and come out on top three times. The sole loss came on Aug. 26, 2016 when East Central took the game, 40-21.

But now the two teams share the same district, adding pressure to what was already a budding rivalry.

The Hornets got off to a strong start this season, beating Corpus Christi Ray 42-27 in their season opener, then San Antonio Roosevelt 28-14 in week two. They fell to a tough Alamo Heights last week, 48-27, but Soto knows his team can’t afford to underestimate them.

“They’re finally playing ball, (head coach Joe) Hubbard’s style of football,” Soto said. “And that’s hard-nosed, run the power at you, run the sweep at you, throw the ball when they need to type football. So, it’s going to take everything we’ve got. It’s going to take every one of our players and everyone in the crowd to bring energy to the field and inject it with enthusiasm and effort.”

The Rattlers’ season has gone the complete opposite direction, falling to Buda Hays, 28-17, then San Antonio Johnson, 48-28, before picking up their first victory of the year over Laredo United, 50-49.

The win, Soto said, has boosted his players’ confidence.

“We came in for Saturday practice and we watched our film. And we learned from the bad, but we also saw most of the good,” senior safety Therrance Soto said. “The coaches know what they’re talking about. And they’re going to set us up to do whatever we can to get the win.”

San Marcos travels to East Central Stadium on Friday to take on the Hornets at 7:30 p.m. Mark Soto hopes his team starts district competition on the right foot.

“They all count now,” the head coach said. “There’s no more lessons to be learned. You’ve got to fight and scrap and claw for every point you can make. And hopefully at the end of the game, you’re up by one and you win the game and you’re in the race for the district playoffs.”