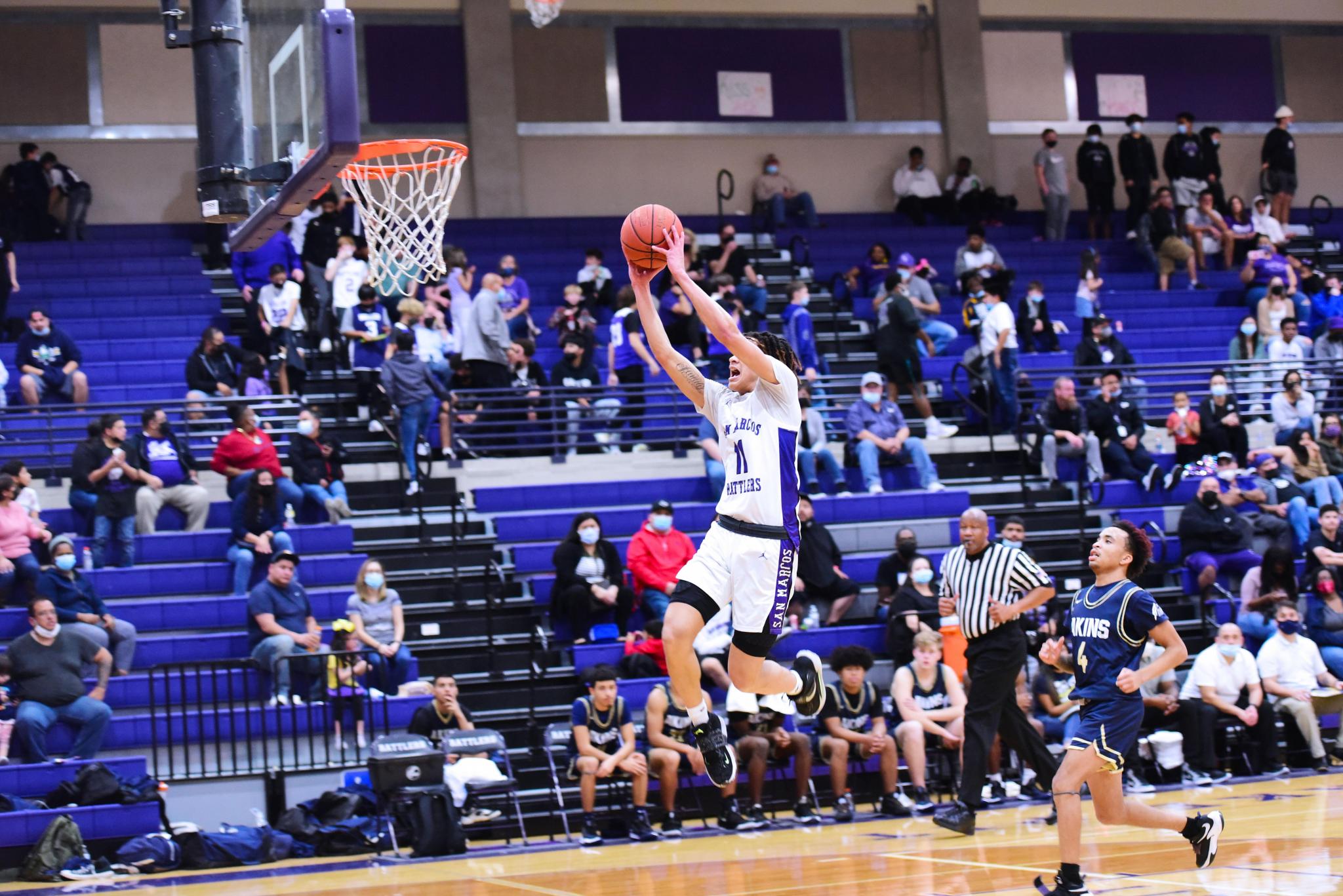 San Marcos defeated Austin Akins, 82-42, in its return to the Snake Pit and Friday night's district matchup displayed more of what the purple and white continue to do at home consistently: protect it.

The Rattlers are 5-0 in district play, winning their last three on the road. But at home this season is where their dominance shines brightest — beating opponents by an average of 25.8 points per game.

“It's very important to defend our home court,” head coach Dan Miller said. “We lock in every time when we come out on that court in practice and we want that to carry over into our games and I thought we did that tonight.”

Akins (6-11, 0-2 District 26-6A) hung tight in the opening quarter behind a nine-point scoring burst by Jai Shaun Upton, who hit tough step-backs from midrange to keep the Eagles fighting. San Marcos’ (22-5, 5-0) scoring came with extra efforts on the offensive glass leading to consecutive-and-ones by junior guard Kaden Gumbs and forward Isaiah DeLeon. The last two buckets gave the hosts a 16-12 lead at the end of one.

The Rattlers’ dynamic duo was sliced in half when junior forward Malik Presley picked up his second foul late in the first quarter. San Marcos called on Gumbs to take over. He answered. A shifty crossover from left to right got him a layup quick, followed by a simple but pretty pass which forced the defense into rotation and allowed DeLeon to hit a 3-pointer. The shot caused Akins to call a timeout trailing 23-12 with 6:33 left in the half.

“Kaden and Malik have that takeover ability,” Miller said. “Anytime that they can get going like that within our offense, we're going to call things for them or it's going to happen organically through our fast breaks or maybe even making some defensive steals.”

Miller's words came to life when a steal allowed Gumbs to get a fastbreak dunk, making it 39-21. The very next play out of timeout, Gumbs found Presley on a backdoor lob that gave San Marcos its largest lead of the game. The two have not been strangers to lobs this season, connecting multiple times over their winning streak. They even tried something new on Friday in the win.

“Me and Malik have amazing chemistry together,” Gumbs said. “We tried to reverse it a little tonight. We tried to get him to throw me a lob. We've been in the weight room listening and trying to get our bounce up and that's how we just maintain getting these lobs in.”

San Marcos maintained more of the same throughout the entire second half, starting the third quarter with a 14-0 run and ending it with Presley bouncing the ball off the ground to himself and flushing it through the rim — an exclamation slam.

“(Be a) star in your role,” Miller likes to tell his team. “We have some top-heavy, really good players but everyone contributes on this team. Whether it's coming in for great defense — usually (junior guard Exavion Harris) usually plays on people or (junior forward) Mateus (Perkins)’s rebounding. (Junior guard) Abel (Trevino) and (sophomore guard) Zyair (Jolivette)’s 3-point shooting. (Freshman guard) Cash (Good) is able to give us another guard who can ball handle. Everybody contributes and so I feel really good about our bench.”

The win marked the first home game for the Rattlers since Dec. 21. DeLeon explained what the difference is between playing in hostile territory as opposed to his home floor.

“Away, it's fun to go against the crowd,” DeLeon said. “But at home it's even more fun just to feed off the energy.”

San Marcos has its toughest home test record-wise as Lake Travis (18-6, 3-1) enters the Snake Pit next Tuesday at 8 p.m. against a red-hot purple and white team that’s won its last three. The Cavaliers boast a 5-1 record on the road this season and come in looking to take San Marcos’ No. 2 seed in the district.

Miller understands the task Jan. 18 presents but he isn’t focused on Lake Travis as much as he is his own team.

“They're great with their ball movement,” Miller said. “They share the ball. They're really good with their man, their zone and they're just a good team. We just need to go to practice tomorrow, have a good practice on Monday and just focus and just be ready to defend our home. It doesn't necessarily matter who we play. It's just about us doing the right things, playing the Rattler way.”