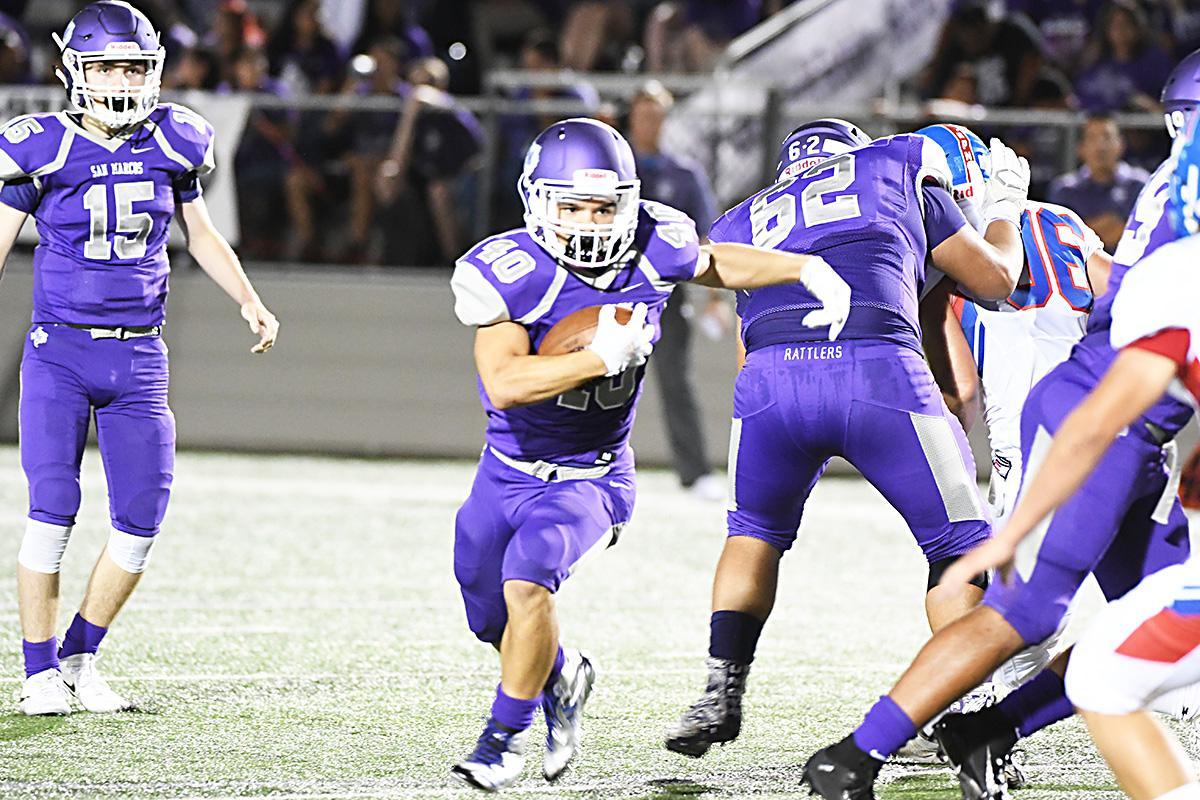 Though the two teams will play for the first time in recent memory on Thursday, San Marcos and Laredo United are all too familiar with each other.

Rattlers assistant head coach and defensive coordinator Gilbert Rodriguez Jr. grew up in Laredo and attended United from 1991-1995. He played football there every season as a wide receiver and kick returner.

Thursday’s game represents a homecoming for the coaches, especially Rodriguez.

“Coaching with a guy like Coach Sanchez, you just learn a lot, you learn a lot about how to be a person, how to be a good coach, how to coach kids,” Rodriguez said. “And then going to school there, obviously it was a different staff, but the tradition that United has … they were winning before me, they were winning after me and they’re winning now. So they have a huge tradition of just taking pride in what they do.”

Sanchez has remained with the Longhorns throughout, running an offense Soto dubbed “The Air Show of Texas.” Like Rodriguez, Sanchez also played for United during his high school year - as a quarterback.

“(Sanchez was) a star athlete there and that’s what he always wanted to do, was throw the ball around all over the place,” Rodriguez said. “And he does a very good job of it. He studies the game really well and he knows what he’s doing.”

The Longhorns have held to form through two games this season. United’s thrown the ball 67 times thus far, completing 35 passes for 601 yards, six touchdowns and four interceptions, compared to 55 rushes for 254 yards and four touchdowns.

The team lives and dies through the air, falling flat to Ediburgh Vela, 48-20, in its season opener then bouncing back against Alamo Heights, winning 44-31.

“They’re going to throw the ball all over the field,” Soto said. “So, we’ve got to be able to run to the ball, hit the ball out in open space and cover up throwing lanes and contain the run.”

After giving up 31 points in the first eight minutes in their 48-28 loss to San Antonio Johnson last week, Soto said the Rattlers have done a much better job of starting off practice on a strong note this week.

The coaches have added a few wrinkles to their defensive scheme to accommodate for the Longhorns’ proficient passing and are confident the team can find a way to win.

San Marcos will face the Longhorns on the road at the United ISD Sports Activity Complex in Laredo on Thursday at 7 p.m.