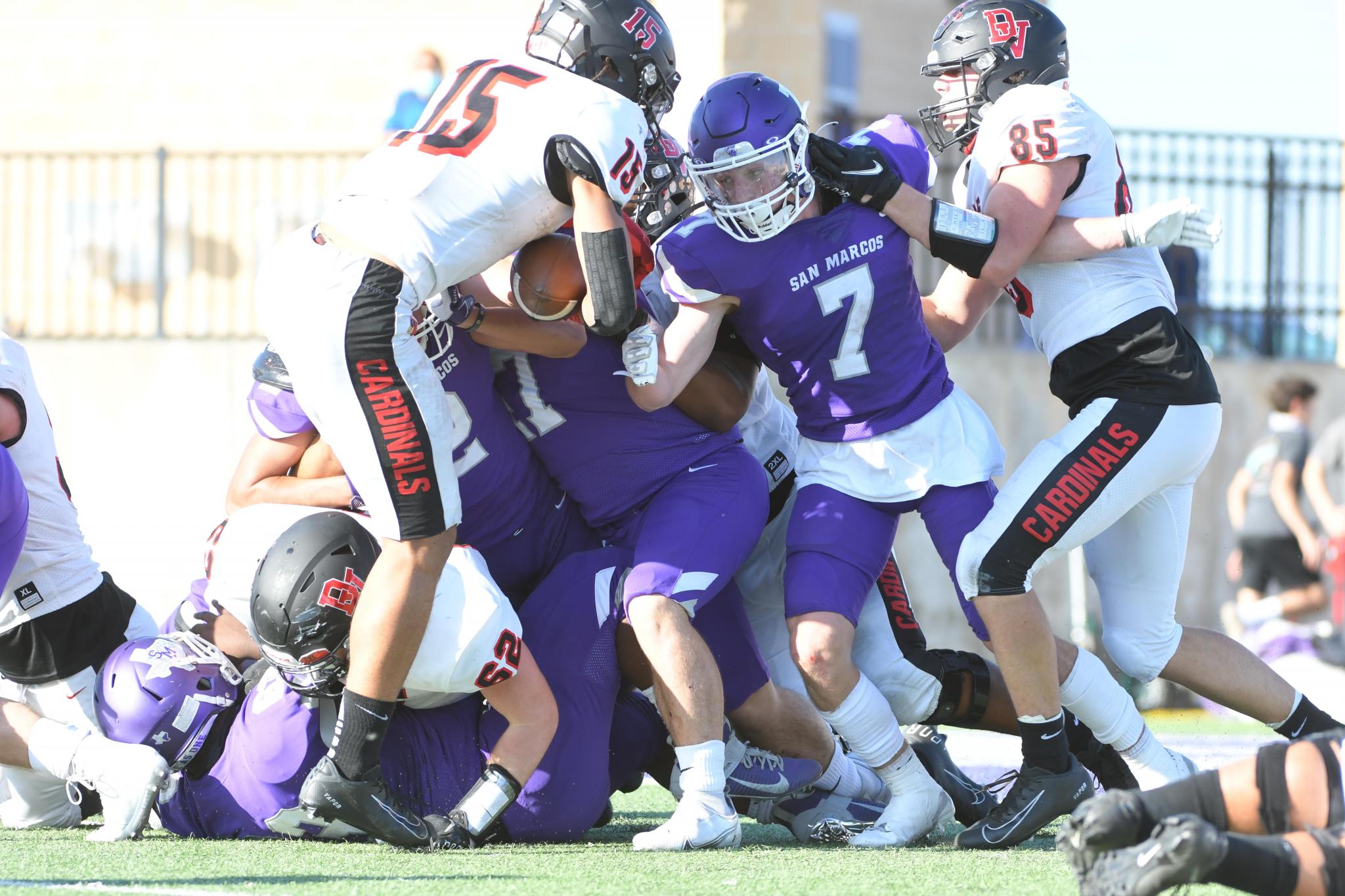 San Marcos struggles in the second half against Austin Bowie, fall 42-28

AUSTIN — Head coach John Walsh started his first couple of years with Denton Guyer with losing records until he turned the program around and got to the state championship years later. His current San Marcos team is young now and still learning how to finish out games. But Walsh sees some similarities in the two programs he’s taken over, especially after a game like the Rattlers played Friday night.

“I come from a program that I was 0-10 and 1-9 and then we got more gold balls that we could put in our field house. Those boys that I can tell that story with learned through lessons as young guys. So I just told the (San Marcos) young guys to ‘Learn these lessons,’” Walsh said. “‘Now, they're hard lessons to learn but learn them and it we’ll be talking about these times next year when you're being successful.’”

On the second drive of the game, San Marcos found some success in running the ball. Senior defensive back Kannon Webb filled in at quarterback multiple times on the drive, picking up 71 yards on four carries. Sophomore quarterback Isaiah DeLeon hit junior wide receiver Jamil Gordon on a 1-yard out route for a score that capped a 9-play, 90-yard scoring drive.

Bowie took no time to respond. Junior quarterback Diego Tello led his team five plays before finding junior receiver Adrian Rodriguez from six yards out to the left side, tying the game at 7-7. That would be the last time the hosts would score in the half.

After the Rattlers scored on the first drive of the second quarter, Webb continued his dominant play from the backfield. On 3rd and 2, the senior punched it in through the gut of the defense. The 21-7 score in favor of San Marcos marked the largest halftime lead for the team this season.

The decision to defer in the first half after the pregem coin flip is always a chess move for Walsh. With a lead like that, the team had a chance to go up three scores early in the second half but momentum shifted when senior cornerback Jason Gaines picked off DeLeon over the middle.

“I defer all the time to gain momentum after the half and we did not gain that momentum. We just stalled out,” Walsh said. “I thought we were a little more physical in the first half that were softer the second half. You can't just win the first half and feel good about it. I thought we handled halftime right, the kids did. It was just a tale of two halves.”

Bowie scored 14 unanswered points in the third, which again left the score tied 21-21 heading into the fourth.

The Bulldogs dug deep in their bag of tricks as Tello threw laterally to junior receiver Cash Peters, who then found Rodriguez wide open down the sideline. The play resulted in a 31-yard touchdown and pushed them in the lead for the first time in the game. San Marcos struggled to find an offensive flow after that as Bowie kept finding the end zone.

DeLeon did find Gordon on a 20-yard score late in the fourth, but by then the game was out of hand. Bowie went to the ground game and was able to run out the clock, securing a 42-28 win, moving them one game closer to making the playoffs.

“I saw what he's doing in the pocket, and our protection has to get better. We gotta get stronger in our offseason because right now we're not strong enough and we're not protecting him enough, so he's not getting throwing time. But he's really growing and he's going to be a stellar quarterback for us at San Marcos,” Walsh said about his young quarterback. “He’s growing every day and he's having to do it not on time. So I'm really proud of him.”

San Marcos has one more chance to finish out the year with a win in district play. That comes next week against Austin Akins in the team’s home finale at 2 p.m. inside San Marcos Toyota Rattler Stadium. Both teams will be searching for their first win in District 26-6A.

“What I've been most proud of this run right here is our spirits have been there,” Walsh said. “The winning spirit has been there. Even though we haven’t won on the scoreboard, I told the seniors to keep that spirit so we can be 2-0 on the way out.“