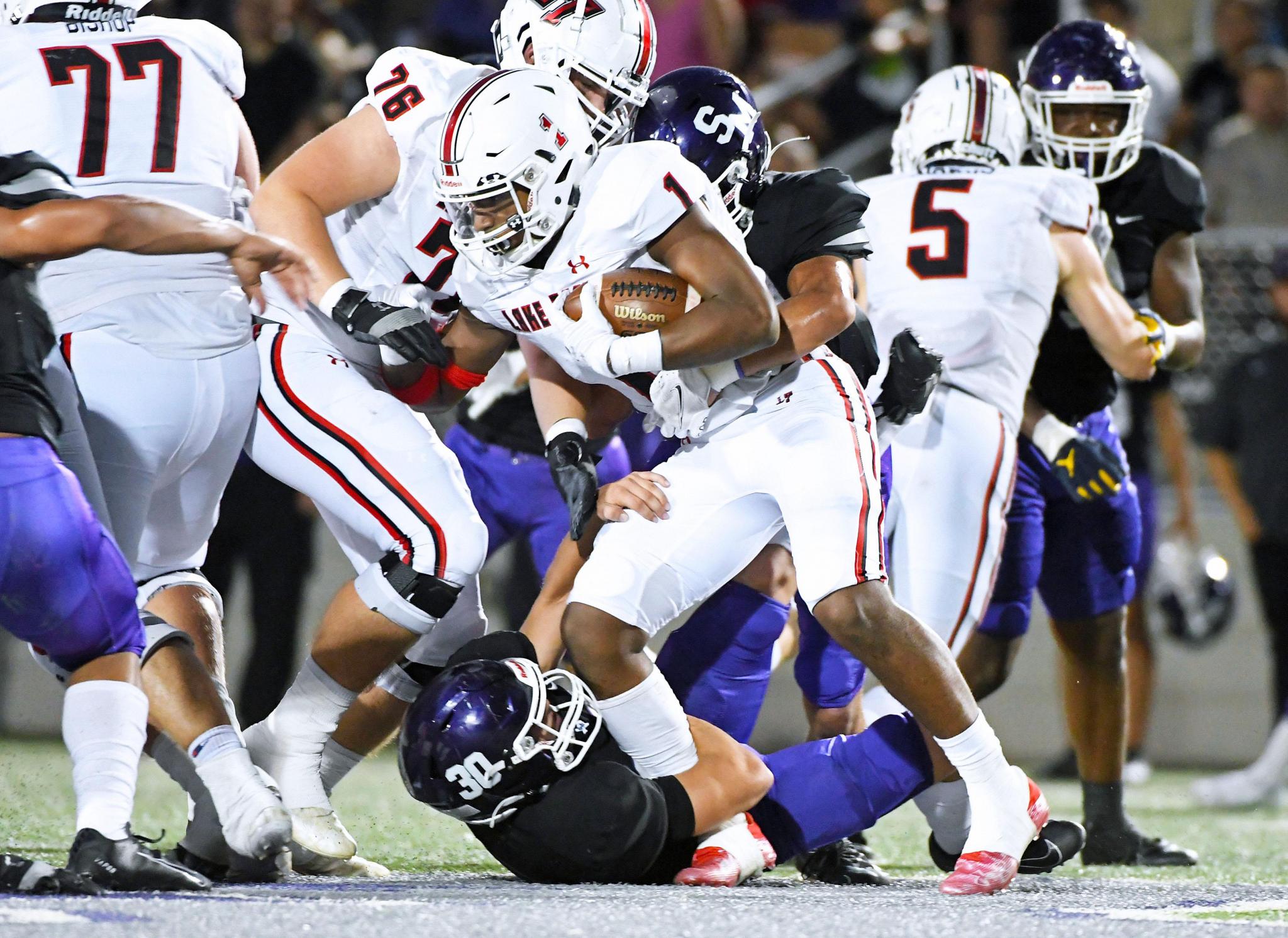 Heading into the week, the Rattlers’ offensive mindset was not to score the ball every time they got possession. It was to force the Cavaliers’ defense to work harder than they had all season to get the ball.

The plan fell apart early in the game as the Lake Travis defense came up with multiple takeaways in the first half and never looked back, giving the No. 10 team in the state a 45-6 bounce back win in the district opener against San Marcos (1-3, 0-1 district) inside San Marcos Toyota Rattler Stadium.

“The disappointing thing about tonight was, I told them before that (the Cavaliers are) not going to make many mistakes, they’re going to be efficient,” Walsh said. “That's with their program’s about. We couldn't we couldn't dig our own holes in the problem that we dug our own hole early. So that's really the only disappointing part I got is, we dug that hole and we didn't make the fight last longer.”

After electing to receive the kick to set the tone, Lake Travis’ stout defense quickly shut the Rattler offense down on its first drive with a three-and-out. The Cavaliers (3-1, 1-0) would respond by scoring on four of its first five possessions. The first came by handing it off to senior running back Derrick Johnson from one yard out. The defense, allowing 35 points per game through three games, completely shut out the Rattler offense in the first half, starting with a fumble recovery on the second kickoff of the game, giving Lake Travis superb field position on its second drive. Instead of handing it off to Johnson, senior quarterback Bo Edmundson faked it and scored himself on a three-yard rushing touchdown, giving the visitors a 14-0 lead early in the first quarter. The two scores came just 16 seconds apart.

The plan San Marcos had set came to a halt once again after junior quarterback Isaiah DeLeon was picked off by senior defensive lineman Max Linhoff and taken to the house for a pick-six. The score displayed a 21 unanswered points by the visitors. Walsh explained that it was the front that was causing trouble for the Rattler offense.

“They’re just really good up front. And I think we're pretty good up front but you can't double everybody. And when we were single blocking, they're just tough matchups,” Walsh said. “Their schemes are good. They do a good job with their schemes and they handle their read game good, they're hard to read and get the perimeter on. Big credit to those guys on how good they are, it was tough sledding for sure.”

The Rattlers picked up some momentum on their third drive as DeLeon connected with senior tight end Elijah Pearson on 45-yard pass down the right sideline — the first time San Marcos earned a first down in the game. After the big play, Lake Travis stopped the Rattlers and forced a turnover on downs on 4th and 5 while scoring on the next possession. That took the Cavaliers to halftime with a 35-0 lead.

Lake Travis held the Rattler offense scoreless for the rest of the night. However, San Marcos did find the end zone by way of its defense. Junior defensive lineman Jake Darling picked up a scoop-and-score on 3rd and 8 with 6:01 left in the game. After a missed PAT, the visitors closed the game out with 10 straight run plays, ending the game, 45-6.

One of the main issues for the Rattlers has been nagging injuries this season and the Rattlers plan on using their bye next week to get everyone back and healthy for the duration of the season. It won’t get any easier when they return, as San Marcos travels to Chaparral Stadium on Oct. 1 to play against No. 1 Austin Westlake and senior quarterback Cade Klubnik, Clemson commit.

“There were zero new injuries, and that's the first (time) this year we did not have an injury tonight. So that's the number one positive because, you know, we said we wanted to survive and make sure we were all healthy by the (Buda) Hays week,” Walsh said. “But yeah, we were healthy tonight and we'll just keep continuing to get healthy. Off week is going to be a pretty good off week for us.  We're going to keep it short, we're going to be smart and we're going to get our legs back and our brains back and have a fresh ballclub when we come back.”