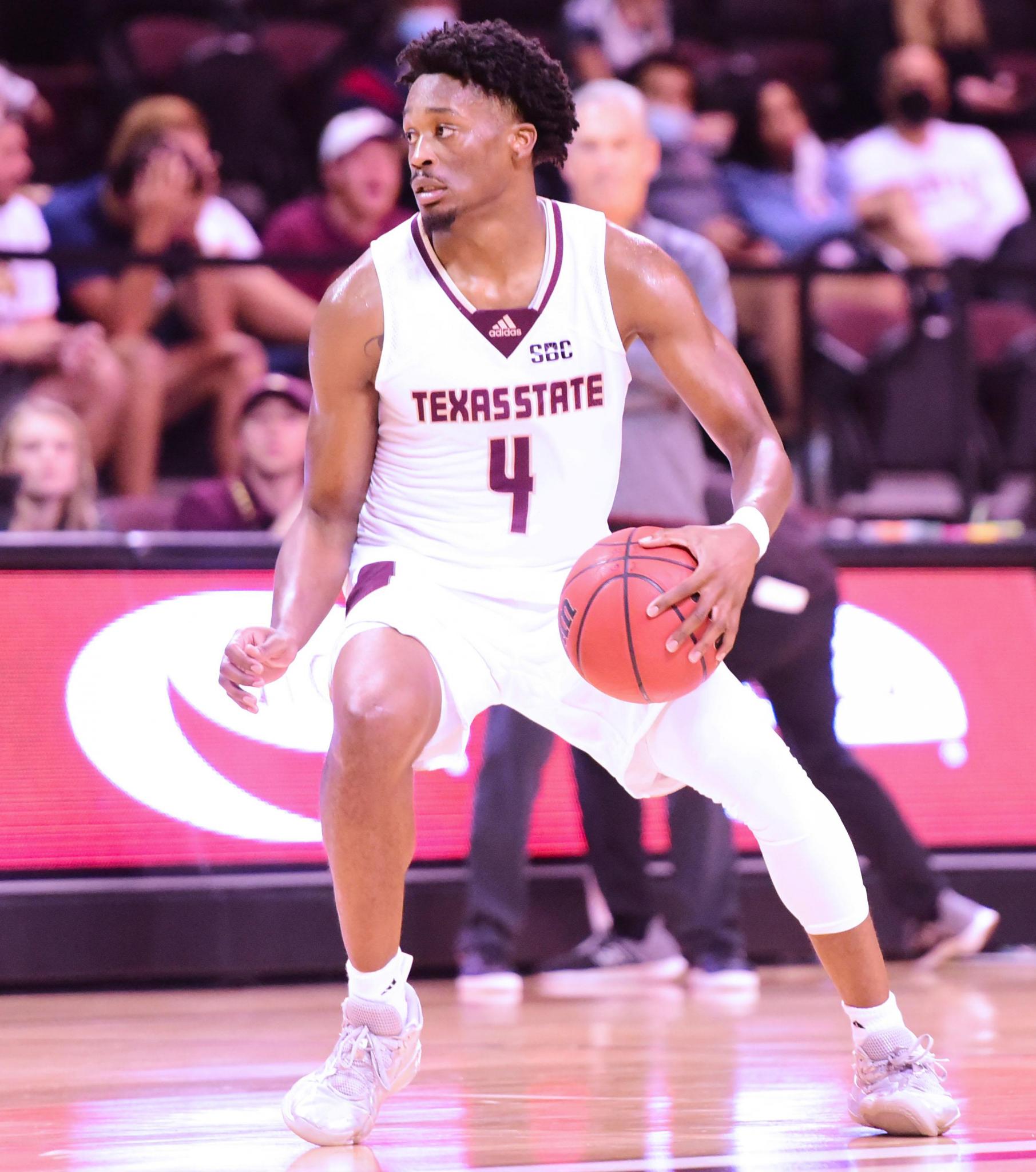 Shelby Adams graduates from Texas State this weekend, a school he almost chose not to attend.

Texas State Men's Basketball’s 2017 recruiting class was going to be an important one. And the team planned for Adams to be a central part of it.

The Bobcats were entering their fourth year under head coach Danny Kaspar. They’d finished in the bottom half of the Sun Belt Conference in all three of Kaspar’s first seasons and hadn’t posted a winning record since 2002-03. Kaspar had fresh talent coming in — players like Nijal Pearson and Marlin Davis — but needed more to keep the program on an upward trajectory.

Adams was entering his senior year as Converse Judson’s starting point guard. He’d led the Rockets to the UIL 6A quarterfinals as a junior, earning All-District 25-6A First Team honors while averaging 17.1 points, 4.6 rebounds, 2.1 assists and 1.8 steals per game.

Texas State assistant coach Robert Guster had just joined Kaspar’s staff after spending the previous 10 years at UTSA. But he already had a great relationship with Shelby’s dad, Stacey Adams, who was the president of the San Antonio Dream Team, an AAU club that featured Shelby and other college-bound recruits.

Guster was determined to bring Shelby to San Marcos.

“I just felt like he fit our culture,” Guster said. “He's just a terrific person who cares less about himself and more about his teammates. And just a really big-time leader.”

Terrence Johnson, a fellow assistant coach at the time, was also hot on Shelby’s trail. He first met Shelby as a sophomore during a camp Texas State held that San Antonio Dream Team brought their entire squad to. Johnson felt like Shelby would be a good fit for the Bobcats, too.

Shelby took an official visit to Texas State in September 2016. His mother, Bernice, came on the trip. Guster and Johnson felt they were making inroads.

Shelby’s relationships with the maroon and gold’s coaches and players strengthened as the recruiting process wore on. He’d received other offers from Sam Houston State, SMU and UTSA. By October, he’d whittled his choices down to the Bobcats and the Bearkats.

“So we felt really, really, really good about it,” Johnson said. “And then, (the day before Shelby was scheduled to commit), I had this great idea.”

To try and seal the deal, Guster and Johnson decided to visit Shelby at school, both donning No. 23 jerseys — the same number that Adams wore at Judson.

It didn’t work. The next day, on Oct. 21, Shelby verbally committed to Sam Houston State.

“It was a challenging year for me. It was the exact same year I lost my mom. As a matter of fact, he decided to go to Sam Houston on the day that I was burying my mom,” Guster said. “You know, you never forget it … I literally remember — you know how the kids do it now, everything's on social media and online and so forth. And so I picked up everything to try to track it and see what he was going to do. And all of a sudden I see, ‘I'm going to Sam Houston.’ I mean, I literally was sick to my stomach. Not only because of the time and dealing with my family situation but also to know that, potentially, we had lost him. And at that time, I felt like we did.

“And I just got a little encouragement through that, to be honest with you, to not give up on it, to see it through … All it did to us as a staff is make us pick it up a little bit more once we realized we were losing.”

Guster ran into Shelby and Stacey a few days after the commitment. He congratulated Shelby on his decision. But he also told Shelby that, until things were set in stone, he planned to keep recruiting him. Guster thought Shelby had a look in his eye like he wasn’t 100% sold on the Bearkats. And Stacey kept telling Guster things like “I don’t know that I would give up on it yet.”

The early signing period passed on Nov. 16 without Shelby inking his letter of intent. Guster and Johnson grew more and more convinced Sam Houston State didn’t have him locked down.

“Gus is just like, ‘Man, I just don't think that the kid's gonna go to Sam,” Johnson said. “So I said, ‘You know what? I was recruiting him before you got here, Gus. I'll just call Stacey. He hasn't heard from me as much lately.’

A few days later, Johnson received a text. It was Shelby, asking if he could come to the next home game.

“I kinda didn't get a good vibe from (Sam Houston State),” Shelby said. “I guess they were kind of upset I didn't sign or whatever.”

Shelby came to San Marcos for a game. Then he was back to practice with the team. He started hanging out with the players, too.

“He was coming around a lot, man,” former Bobcats guard and current graduate assistant Ojai Black said. “Like, you would have thought he was a part of the team already.”

Shelby was back at Strahan Arena on Feb. 27, 2017, for Texas State’s final home game of the season. The Bobcats took a 90-64 Senior Night win over South Alabama, securing the program’s first record above .500 for the first time in 14 years.

As the team headed for the locker room to celebrate the historic victory, Guster waved at Shelby to join them.

“It just felt like he belonged here. Like there's no way we let this guy go somewhere else,” Black said. “Around that time, the culture was shifting with that group — me and (fellow seniors) Bobby (Conley) and Kavin (Gilder-Tilbury). The culture was shifting and we were trying to create something and lay a foundation. And I believe (Shelby) saw that as well in how we approached the game and how we played the game and he was a fan of ours.”

On March 1, four days after the game, Shelby decommitted from Sam Houston State. Six days after that, on March 7, he pledged to Texas State.

Shelby was one of four freshmen added to the Bobcats’ roster the next season, joining fellow guard Reggie Miller and forwards Quentin Scott and Alonzo Sule. Of the four, he’s the only one who remains with the maroon and gold now five years later.

It hasn’t always been easy. At 6-foot-4, Shelby’s been asked to play on the wing and off the ball his entire career. He spent his early years backing up Nijal Pearson, who became the program’s all-time leading scorer and hardly came off the floor.

But on Jan. 4, 2020, Kaspar moved him into the starting lineup for a road game against Arkansas State. It was only Shelby’s second career start and he’d played just two minutes in the team’s game two days earlier.

He played 23 minutes in the start, scoring one point on a free throw and grabbing six boards.

The fifth-year senior has started every game for the team since, developing into a tenacious defender and stabilizing presence for the Bobcats and helping them win their first-ever Sun Belt regular season championship last year.

At the end of the season, Texas State had five seniors with an extra year of eligibility due to the NCAA’s COVID rules. Marlin Davis joined the coaching staff as a graduate assistant. Scott, Sule and Isiah Small all entered the transfer portal — though, Small eventually returned to the team.

Shelby was the only one whose first decision was to stay. It would have made sense for him to leave. All his fellow seniors were. He also has a son now, Jace, who turned a year old in August.

“It's an amazing feeling just knowing that (Jace) has, like, 16 uncles with him,” Shelby said. “Anytime he comes to the gym, he knows that his first word when he walks through the door is ‘ball’ … And then when he sees everybody on the team, the coaching staff, the players, the trainers, his face lights up and he's just trying to interact with them and mess with them. And they love him as well.

“Just knowing that I had another opportunity to come back and play, it was a no-brainer.”

Shelby will walk the stage inside Strahan Arena on Friday at 10 a.m., receiving a bachelor’s degree in general studies with minors in mass communication, sports psychology and sociology.

He’s excited for what the rest of the season has in store. Shelby’s averaging a career-high 9.0 points per game through eight contests this season, a product of Johnson, now Texas State’s head coach, running him off more screens and putting more faith in him to handle the ball. The Bobcats (6-2) return to the court on Sunday at 4 p.m., hosting Southwestern (3-6).

The program plans to make the most of its final year with Shelby.

“It'll be extremely challenging for me this weekend when he graduates to not be in a corner somewhere crying,” Guster said. “You know, I've been doing this a long time, this is year 23 for me. And I've had numerous guys and generally speaking, you know, 40 or 50% of them you kind of keep a solid rapport with and kind of get to know a little bit more as they grow up and become men.

“There is no doubt in my mind, for as long as I'm around on this earth, that I’ll be involved in Shelby’s life.”