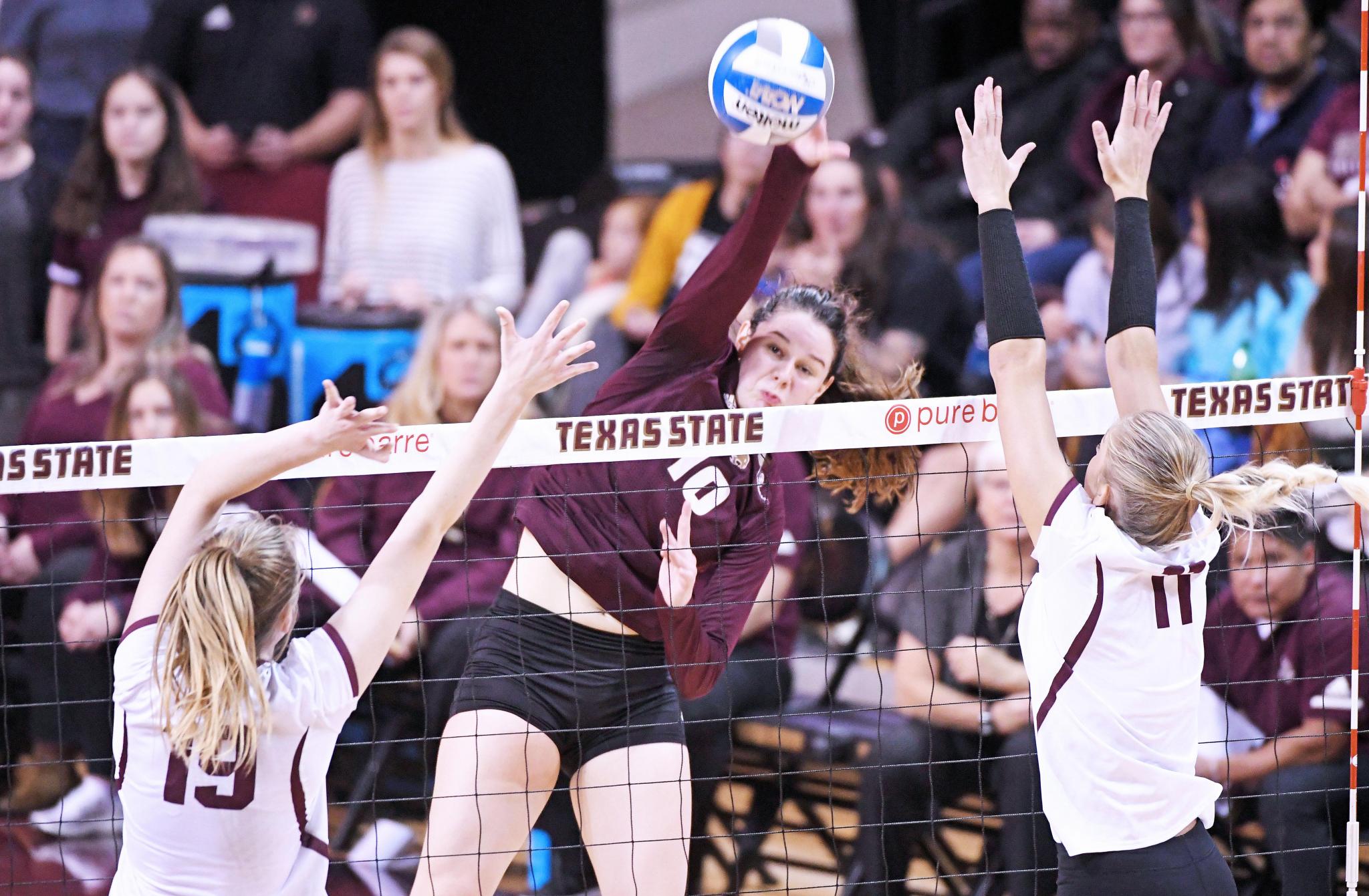 State leans on rookies in sweep over Trojans

Tessa Marshall didn’t think she was going to play much this year.

The freshman middle blocker had only played in nine matches all season when Texas State traveled to Lafayette, Louisiana last Sunday to go up against the Ragin’ Cajuns. But sophomore middle blocker Jillian Slaughter suffered an injury two days prior in a 3-0 win over Louisiana-Monroe. Head coach Karen Chisum started Marshall in Slaughter's place.

The Bobcats fell 3-2 to Louisiana but Marshall left her mark on the game, scoring eight kills on a .368 hitting percentage.

“Me and (sophomore setter) Emily (DeWalt) were connecting really well the whole time. And when we could get a pass it was just offense, completely,” Marshall said. “It was my job to step up and do really well. And I think I did that for my team.”

“I thought that was a great team win. We got a lot of people in tonight and got to do some things to get ready for the rest of the season and get some kids some exposure,” associate head coach Sean Huiet said. “Just giving them the chance to play and get in a rhythm — because we know we're going to need everyone down the road. And so it was great to see them step in and do a great job.”

Marshall started again Friday, though struggled early on with just one kill and two errors on five shots even as Texas State claimed the first set, 25-16. The Round Rock native bounced back in the next frame, though, picking up two kills without a mistake and rejecting two shots at the net.

Freshman outside hitter Caitlan Buettner and defensive specialist Michelle Foster checked into the match in the second set as well, helping the Bobcats to a 25-17 win.

“I thought it was a great opportunity to get everyone in, change the lineup and see what we can do as a team and as individual players,” Buettner said.

Buettner caught fire in the final frame of the night. The rookie from El Paso swatted four points and dug out four balls in the third game, helping the Bobcats seal a 25-18 victory and a 3-0 sweep.

Marshall finished the game with six kills, two digs and two blocks. Buettner tallied five kills, six digs and one assist. Foster picked up three digs and an assist and freshman middle blocker Allie Smylie, who entered in the match in the third set, added a kill as well. Senior outside hitter Cheyenne Huskey led the team with 14 kills and two aces.

Buettner said she’s grown a lot in her first season with the maroon and gold.

“What was working for me is our connection with (DeWalt). It's gotten better over the year. When I first came in, I had no connection. And now we kind of do now. So now it's just getting the ball rolling,” Buettner said. “As a player, I've been more vocal. I came in quiet and I just know that I need to talk in order to play.”

The Red Wolves are just one of two Sun Belt teams who have beaten Texas State this season. Huiet said the players want to make up for the 3-2 loss in Jonesboro, Arkansas on Oct. 4, but more importantly want to clinch a share of the conference’s regular season title.

“I think we've been on a mission and we've said from the beginning we want to be playing for a championship,” Huiet said. “You kind of see if someone gets injured or someone goes out, someone's having a bad night, one of the things at Texas State that we've been really good at is we have people that can step in and we don't miss a beat. And that's been really good here as of late.”