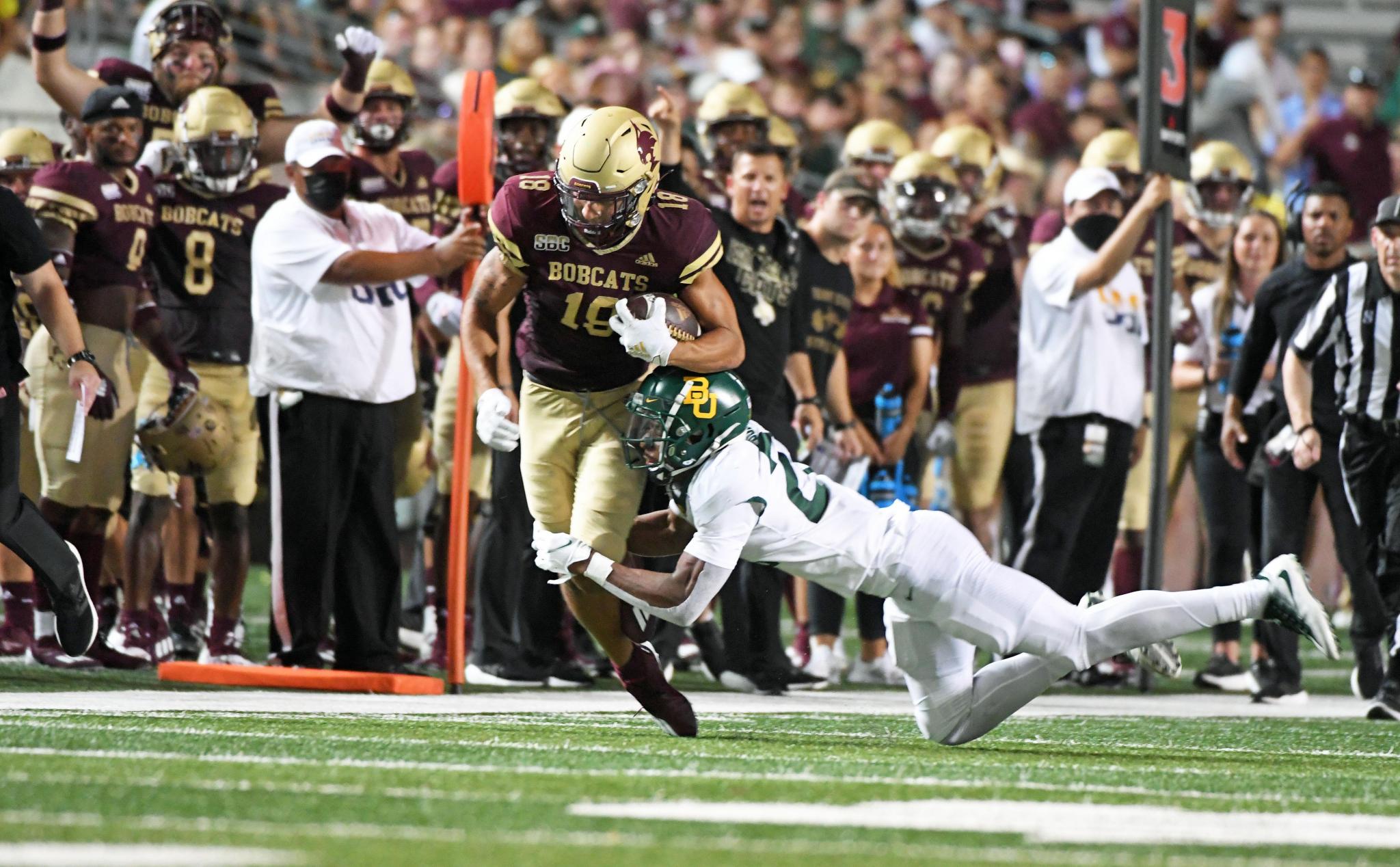 Texas State comes up short in 29-20 loss to Baylor

Texas State isn’t a stranger to being in close games. The Bobcats were in six contests that were decided by six points or less in 2020. The team instinctively knows how to keep fighting, even while behind.

But the maroon and gold also aren’t strangers to unraveling down the stretch when it’s neck-and-neck. Five of the six close matchups from last year resulted in losses. And Texas State fell by a single-digit margin again on Saturday, losing to Baylor inside Bobcat Stadium, 29-20.

“Overall, you gotta be pleased that we can at least be in that game with a quality opponent at the end, you know?” head coach Jake Spavital said. “And you're disappointed as a university and program on just how it ended because we feel like we left a lot of football out there.”

Both defenses got off to a strong start to the game. Texas State's offense went three-and-out on its first drive. Sophomore defensive end Jordan Revels forced a Baylor fumble on the next, which was recovered on the Bobcats’ own 25-yard line by senior defensive tackle Caeveon Patton. But quarterback Brady McBride was intercepted on the very next play by Bears senior safety JT Woods, who returned it 20 yards to the end zone for a pick six.

The home team bounced back, slowly building momentum in front of a crowd of 26,573 — the school's sixth-largest attendance in history. Texas State (0-1) used a 14-play, 72-yard drive to set up a 21-yard field goal for sophomore kicker Seth Keller. Freshman safety Zion Childress forced another fumble after Baylor (1-0) entered the maroon and gold’s end zone on third down. The Bears recovered the loose ball, but missed on a 40-yard field goal on fourth down. The Bobcats countered with a 12-yard touchdown pass from McBride to junior wide receiver Marcell Barbee, taking a 10-7 lead with just under seven minutes left in the half.

“We played a helluva game,” Childress said. “Baylor doesn't mean nothing ... As a defense, we gave it everything we got. We just gotta give a little bit more.”

Baylor ended the first half marching 75 yards on 13 plays and scoring on a three-yard rush by senior running back Abram Smith, jumping back in front, 14-10. The visitors added another three points on their opening drive of the second half, held the hosts to a three-and-out, then scored again on a 13-yard touchdown run by Smith to make it 24-10.

Texas State’s offense struggled in the second half. The team was down two starting offensive linemen entering the game — junior left guard Russell Baker and senior right guard Eddie Rivas — and left tackle Dalton Cooper exited with a left leg injury late in the second quarter and did not return.

Keller connected on a 38-yard field goal to end the third quarter. But the Bears picked off McBride to end each of the Bobcats’ next two drives.

“We practice a lot, so we have to work as a unit, no matter who's in the game,” said senior right tackle Liam Dobson. “We got to practice with that offensive line in practice last week and the week before. So we just have to communicate better as a unit when we're all out there together.”

“Brady's got to take care of the ball a little bit better but we gotta help him out,” Spavital said. “(Baylor's defense is) rushing four and they're dropping seven and they're matching everything up and I thought he made a lot of great plays with his feet at times. You know, a lot of our success was him scrambling. And he's the one guy that I've got in that quarterback room that can make plays on his feet because I knew that protection was going to be very dicey with the offensive line that we put out there.” 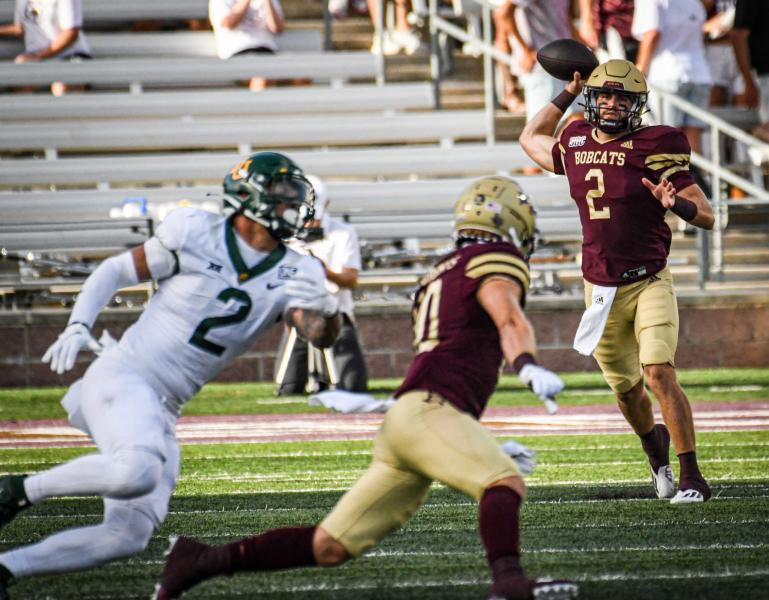 The Bears went back up by two touchdowns again, scoring a field goal on their first drive of the fourth quarter. Sophomore running back Jahmyl Jeter kept Texas State in the game, taking five carries for 34 yards and a touchdown on a drive late in the game to cut the deficit to 27-20.

The maroon and gold went for an onside kick, but couldn’t recover the ball. Baylor’s offense went three-and-out, giving the hosts possession on their own 10-yard line with 15 seconds left and two timeouts.

McBride threw for an incomplete pass on first down. He tossed it to Barbee on the last play of the game, who tried to lateral it to junior slot receiver Chandler Speights. But the ball was fumbled in the end zone and recovered by McBride for a safety, ending the game 29-20 in favor of the Bears.

“I do think we've got a good team in that locker room, a team that's going to fight and play,” Spavital said. “You know, the challenge is always continuing to get better every single day and playing your best ball at the end. And we gotta come back (Sunday) and get to work.”

McBride finished the game completing 20 of 40 passes for 156 yards and one touchdown with three interceptions. Barbee was his top target, catching four passes for 56 yards and a score. Jeter led the backfield with 45 yards on eight carries and a TD.

Senior safety Troy Lefeged Jr. racked up a team-high 10 tackles, including one for a loss. He was followed by Childress, senior cornerback Michael LoVett and linebacker Markeveon Coleman with seven stops each. Childress and freshman linebacker Issiah Nixon each earned a quarterback hurry.

Spavital said he was impressed with the roster’s depth. Had the team been down three starting O-linemen in a game last year, it might not have competed as well.

Texas State will search for its first win next Saturday when it plays Florida International (1-0) on the road at 6 p.m. Dobson said the team will be motivated a little more by the sting of another close loss.

“I mean, we're upset,” Dobson said. “You know, everyone thinks getting blown out sucks the most. But when you're in those games, when you have a chance at the end, especially when you have the ball and the chance to tie it? That sucks.”