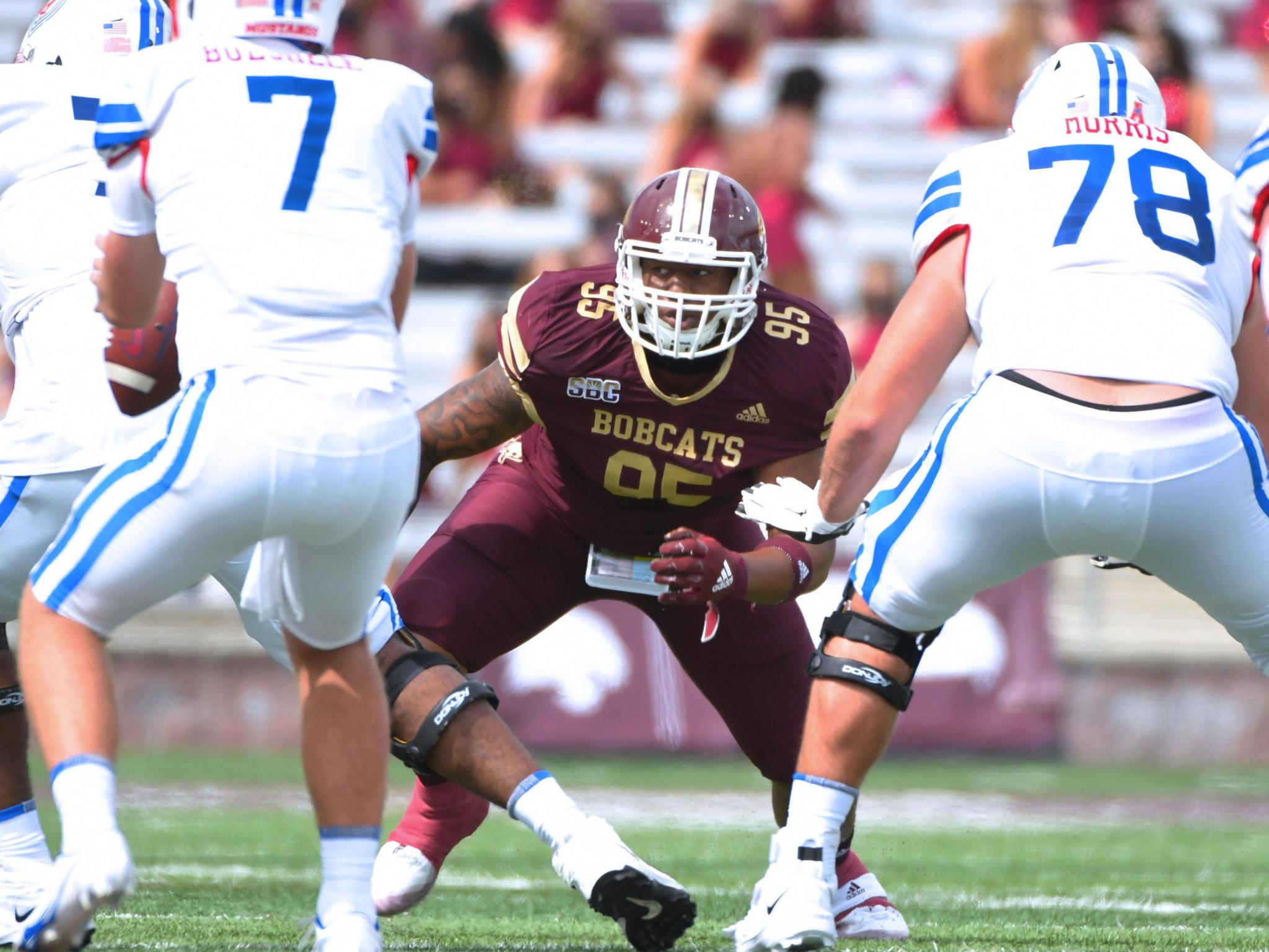 Texas State entered Saturday’s game against South Alabama with a 1-10 record under head coach Jake Spavital when trailing at halftime. The one win for the Bobcats came when it hosted the Jaguars on Nov. 9, 2019, coming back from a 14-13 deficit to claim a 30-28 victory.

The Jaguars (2-2, 1-0 Sun Belt) got on the board first, forcing a turnover on downs during the Bobcats’ game-opening drive, then charging 50 yards in 10 plays in the opposite direction, resulting in a 33-yard field goal by sophomore kicker Diego Guajardo. Texas State (1-5, 1-2) responded on the next drive. Sophomore running back Brock Sturges rushed three times for 14 yards and sophomore quarterback Brady McBride — who earned the starting nod over junior Tyler Vitt — completed five of his next six passes for 52 yards, including a 9-yard touchdown to redshirt sophomore tight end Jackson Lanam to take a 7-3 lead.

But the visitors were hit with their first blow on defense on the next drive when junior safety Brendon Luper was disqualified for the game on a targeting penalty. The Bobcats would lose another two impact defensive players by the end of the game.

South Alabama regained the lead early in the second quarter with a one-yard rushing touchdown by sophomore tailback Carlos Davis. Texas State redshirt sophomore kicker Seth Keller tied the game up at 10-10 with a 30-yard field goal but the hosts used a 14-play, 75-yard drive to go back up, 17-10. Jaguars junior wideout Jalen Tolbert appeared to push off from Bobcats junior cornerback Jarron Morris to catch a 1-yard touchdown from junior quarterback Chance Lovertich, but Morris was flagged for defensive pass interference instead.

The hosts left just 12 seconds left in the first half for Texas State and received the ball to begin the second half. The maroon and gold defense stepped up, though, forcing a trio three-and-outs on South Alabama’s next three drives.

The Bobcat offense took advantage, as McBride launched a 36-yard pass to redshirt sophomore wide receiver Jah’Marae “K-Dot” Sheread to move down to the Jaguars’ goal line. Sturges punched the ball in on the next play to tie the game again at 17-17.

Texas State’s defense was hit with another loss at the end of the third quarter as senior linebacker Markeveon “Binky” Coleman was also disqualified for targeting. Guajardo made a 24-yard field goal to go back up at the beginning of the fourth quarter. Keller matched it on the next drive with a kick from 41 yards out.

But sophomore cornerback Rodrick Hockley injured his left arm defending a pass in the end zone on the next drive. Bobcat trainers put Hockley’s arm in an air cast and escorted him to the locker room. South Alabama sophomore quarterback Desmond Trotter tossed an 8-yard, go-ahead touchdown to senior wide receiver Kawaan Baker to finish the series.

The Texas State offense went three-and-out on its next possession. The Jaguars used a 10-play, 46-yard drive to run four minutes off the clock and extend the lead to 30-20 with a 44-yard field goal from Guajardo. The Bobcats were unable to score on the last drive of the game, giving South Alabama a win in its league opener.

McBride finished the game completing 28 passes to 10 different receivers on 40 attempts for 260 yards and a touchdown. Lanam and junior wide receiver Marcell Barbee were his top targets, each catching five passes, Lanam gaining 48 yards and a touchdown and Barbee adding 45 yards. Sophomore running back Jahmyl Jeter led the backfield with 31 yards on five carries, followed by Sturges with 30 yards and a score on eight carries.

Junior defensive lineman Nico Ezidore consistently pressured the Jaguars’ backfield, racking up a team-high nine tackles, five of them unassisted, four of them for a loss, and bringing down Trotter on an 11-yard sack. Sophomore safeties Kevin Anderson and Tory Spears followed Ezidore with eight tackles each. Morris broke up three passes and senior defensive lineman Jaquel Pierce forced the team’s only two quarterback hurries of the day.

Texas State will complete its five-game road stretch next week when it visits its last non-conference opponent of the season in No. 14 BYU (5-0). The game is scheduled to kickoff inside LaVell Edwards Stadium in Provo, Utah, and will air on ESPN at 9:15 p.m.