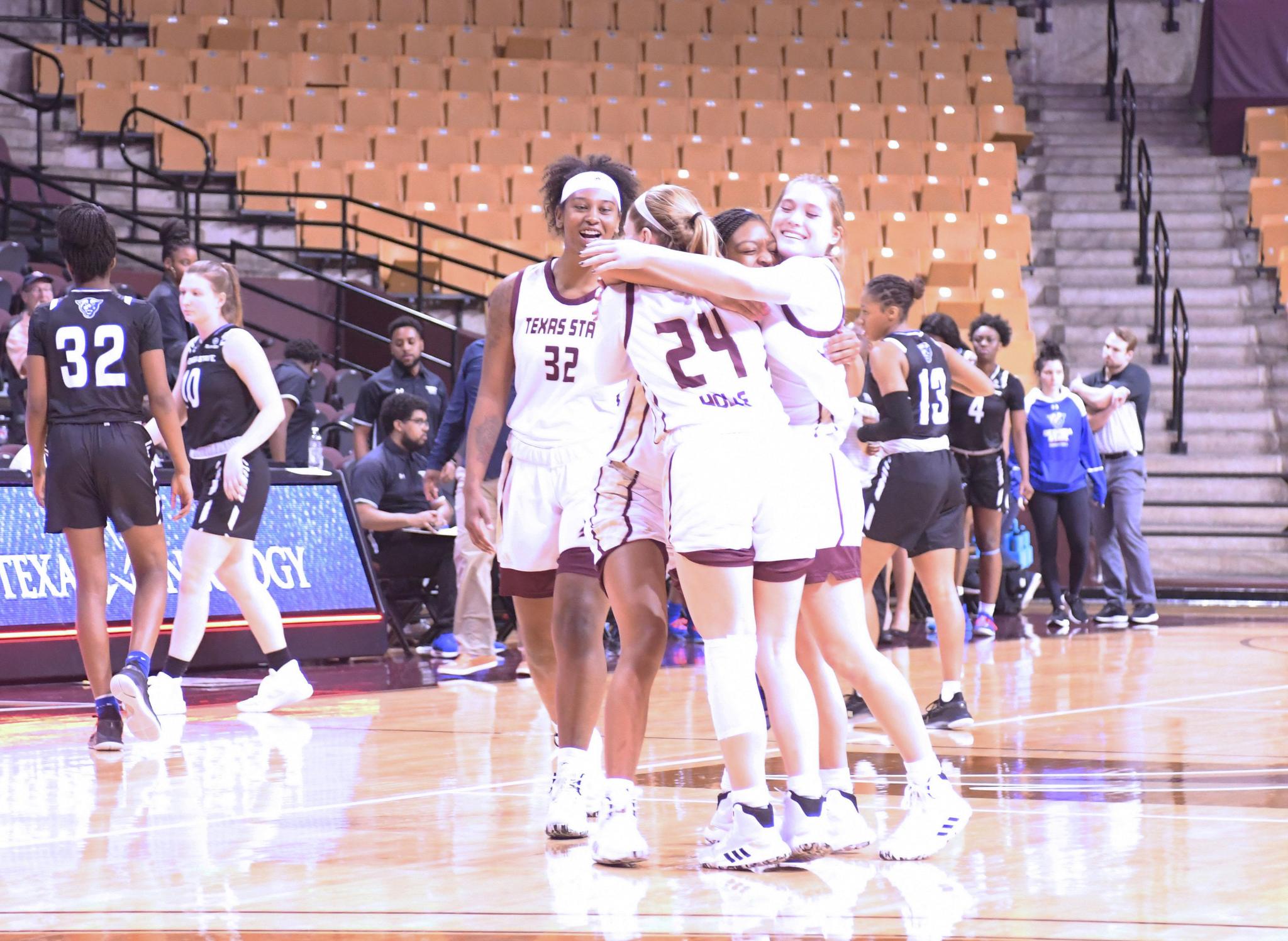 Over the final two home games of the season for Texas State, the team forced 36 turnovers with tight ball pressure and defensive versatility at every position on the floor, making it opponents struggle to get easy looks.

Head coach Zenerae Antoine gives most of the credit to the film room and how the staff breaks down how the team looks on the defensive side of the ball.

“The thing that helped our players is film. Going back to UTA, we were so stuck on 0-8 (in conference play) that they didn’t recognize our defense was horrible to start out and I think that was an ‘Aha!’ moment,” Antoine said. “Just being able to show defensive clips to our team so they can see what we see — because sometimes you really feel like you’re doing something but you’re not. And no matter what anyone tells you, you really don’t know until you have the opportunity to really see it in front of you. So I think that also helped. They’ve done a better job, even within games we’d have to make defensive adjustments, and we’ve been able to do that.”

Something was discussed after a minute and a half of play after Georgia State opened the game with multiple transition buckets. Whatever was said in the huddle between Antoine and her team worked as the maroon and gold responded with a 14-8 run, forcing five turnovers in the first quarter.

After forcing Georgia State’s 11th and 12th turnovers of the game, junior forward Jayla Johson came flying in from the top of the key for a putback layup. The bucket gave Texas State the lead for the second time heading into the half, 28-26.

The team came out on fire in the third, hitting four of its first five shots including consecutive buckets from sophomore Da’Nasia Hood, which put the Bobcats up 37-30 with 7:26 left in the quarter. Hood has been dominant from the 3-point line, but she doesn’t want her game to be one-dimensional.

“Top of the key is definitely my sweet spot. But when I work on my shot,s I shoot from everywhere on the floor. I don’t just consider myself as a shooter. I want to be labeled as a scorer,” Hood explained. “So I work on every spot on the floor. I’ve been working harder lately, like a lot of teams have been jamming me rolling down because I’m not always open for the 3. So I’m just finding other ways to score.”

Even with the maroon and gold finding ways to get stops and score in a consistent way, it never seemed like the Panthers were out of it. In fact, the visitors took the lead 47-46 early in the fourth quarter. But the resilience that the team has shown down the stretch of conference play held up. Hood and senior guard Brooke Holle both hit 3s in order to regain the lead.

Holle wasn’t done getting buckets. The senior received a pass from sophomore guard Kennedy Taylor in the right corner — opposite of the last three — and knocked down the first four-point play of her college career, extending the lead to 58-50.

“I mean it was great. I never really had a four-point play in my college career, so it was just so timely and I loved that it was by our bench,” Holle said. “Like, it couldn’t have been more of a perfect timing and a perfect spot just for my teammates to be able to come back behind me and rally for me, it made me feel good.”

Down the stretch, Texas State continued to put the pressure on, causing three more turnovers in the last three minutes of the game. The Panthers resorted to the foul game, tagging Hood with 10.2 seconds left on the clock. She iced the game by knocking down both free throws and pushing her team ahead, 67-62, for the final win of the year at home.

Hood finished with a team-high with 18 points and eight rebounds. Holle closed out her final game at Strahan Arena shooting 4-6 from deep, accumulating 17 points, four steals and four rebounds. Holle also will go down as one a top-10 3-point shooters in program history with 133 triples made in her career. She celebrated the Senior Day game with her twin sister, Bailey Holle, who was a defensive menace for the Bobcats.

“Honestly I looked to Bailey. She did a good job mixing up between her and (junior guard Avionne) Alexander of guarding on that dribble penetration not allowing (Georgia State redshirt junior guard) Jada Lewis — who's a very good player — to get to easy shots,” Antoine said. “(Lewis) made some tough shots, but they forced her to make some tough shots. I thought that was really pivotal for us.”

Texas State is now a half-game ahead of Georgia State at 10th place in the standings with two more important road tests coming its way. The Bobcats travel to Monroe, Louisiana and will take on Louisiana-Monroe (3-24, 1-15) Thursday at 6 p.m. in the Fant-Ewing Coliseum.