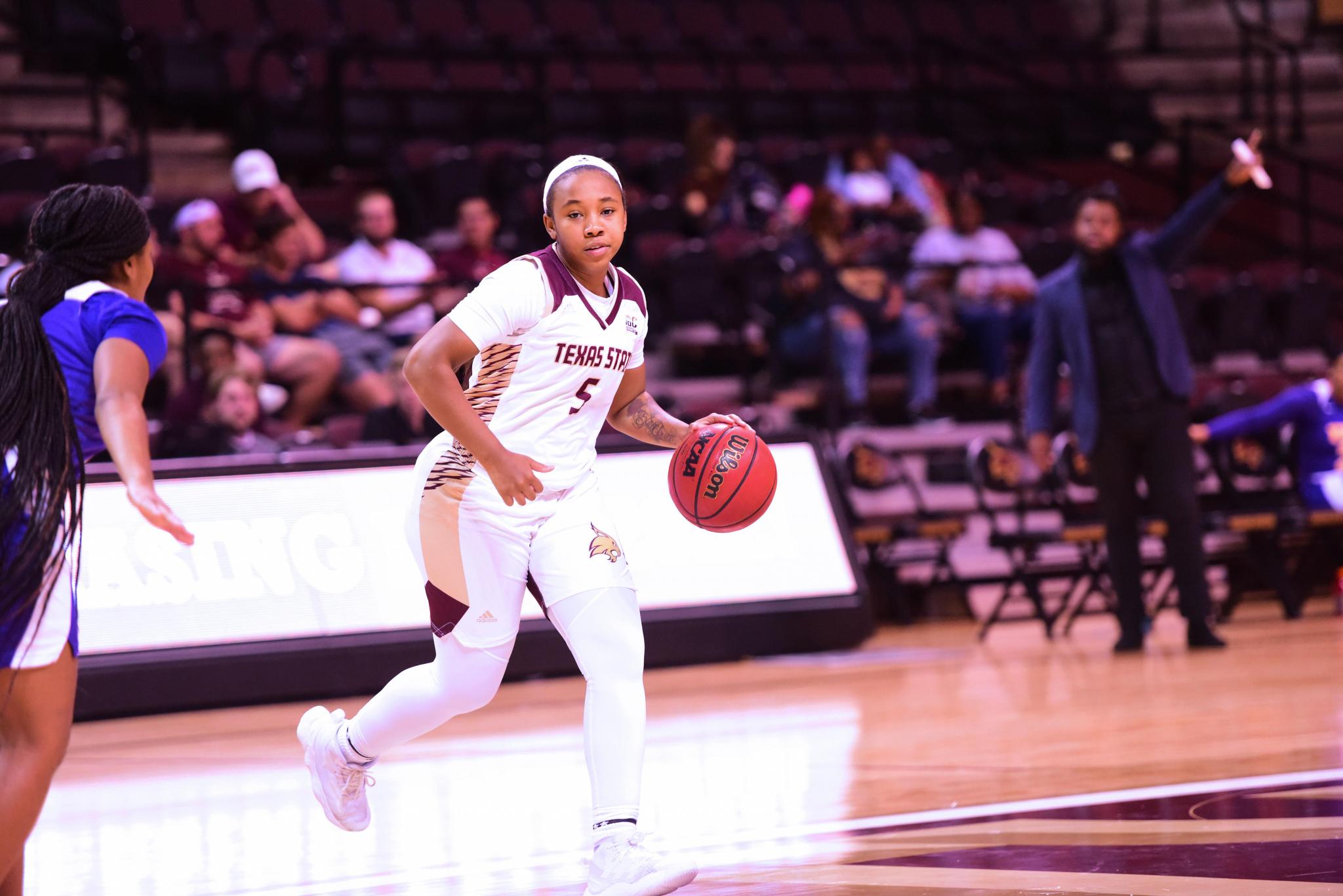 Tianna Eaton has cracked 20 minutes in a game four times in her Texas State career.

Three of those times came last season, Eaton’s first in San Marcos. All three also came during Sun Belt play in moments when head coach Zenerae Antoine turned to her bench in need of someone to provide a spark or fill a gap in the rotation.

But Eaton relatively didn’t play much throughout the course of the season. Her playing time wavered as she struggled to nail down a consistent role on the team, ending the year averaging 11.1 minutes and 2.6 points per game.

That’s why games like the Bobcats’ 105-37 home win over Texas College on Sunday matter. In a more competitive matchup, Eaton might’ve seen spot minutes and had less time to get into the flow of the game. But on Sunday, Eaton saw the floor for 26 minutes, a season high, and played the best game of her career, scoring 21 points on 9-10 shooting, grabbing three rebounds and collecting two steals and a block.

“These games are opportunities for us to work on a lot of different things from a chemistry standpoint, but also get players back in flow that had either been out, haven’t had an opportunity,” Antoine said. “And so that’s what we saw today. We had a lot of different players have the opportunity to come in and step in and work on some things that we’ve been working on, work on some things that they need to get better at and also work on conditioning at the same point. And then give rest to other players right now and allow them to actually sit and watch and learn as their teammates are out there on the floor. So you know, that’s what I appreciate about this opportunity to play Texas College.”

Eaton wasn’t the only player who took advantage of her minutes against the Lady Steers (3-5). Six different Bobcats finished the game with double-digit points — three from the starting lineup and three from the bench. It resulted in the most points scored by a team since Antoine took over the program in 2011.

Graduate guard Jo’Nah Johnson was one of them, dropping 11 points and a team-leading five assists. Johnson has been a plug-and-play starter for Texas State since transferring from Texas Tech in the offseason. Every chance she gets to play with her new teammates helps build up her chemistry.

“When Coach Z first called me, like our first conversation, she kept real with me. Like at the end of the day, this is really a business,” Johnson said. “And she kept it real to me, she didn’t sugarcoat nothing, she kept it real. And that grabbed my attention immediately because I love that in a coach. I love somebody who’s really authentic and just wants to keep it real and not try to play you like it’s a business. And since I’ve been here, it’s been nothing but love. I found my love for the game again thanks to the coaches and my teammates, so it’s been really fun.”

All 11 players who saw the floor scored for the Bobcats. Eaton’s 21 points led the way, followed by sophomore guard Sierra Dickson with 13, Johnson and redshirt junior forward Lauryn Thompson with 11 each, and senior forwards Da’Nasia Hood and Jaeda Reed with 10 each.

Texas State (5-2) will hope the experience pays dividends as it travels to play Lamar (2-4) on Friday at 7 p.m.