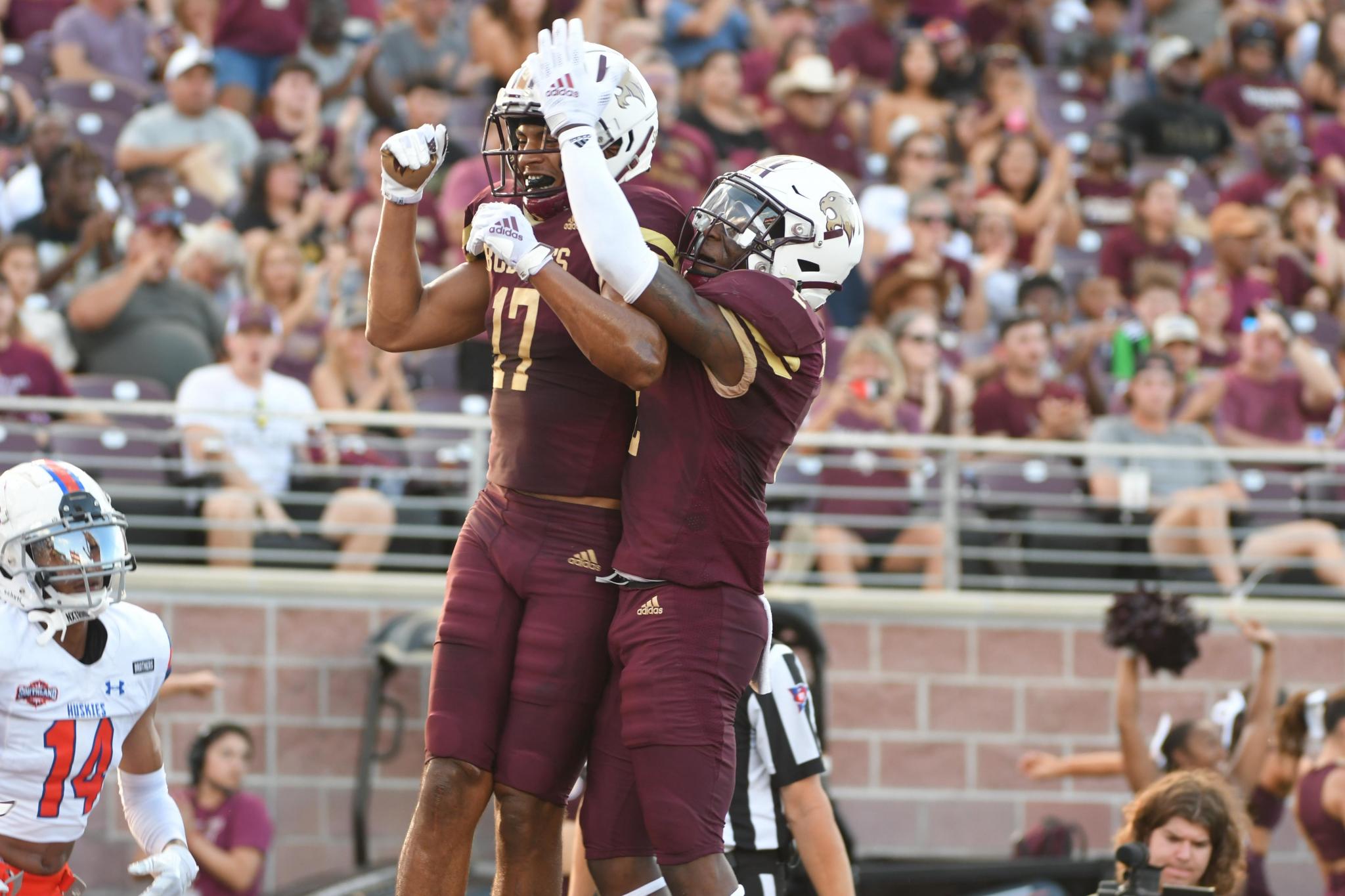 The Bobcats took care of business against Houston Christian (HCU).

Texas State rolled to a 34-0 victory over the Huskies, putting up the first shutout since Aug. 30, 2014, when the maroon and gold beat Arkansas Pine-Bluff 65-0. It was also a historic night defensively, the Bobcats gave up just 142 yards of offense — the least in Texas State’s FBS history.

“A lot of the credit (has to go) to that defense. The defense played extremely well. I thought the offense came out (and) had a good first half. Like that’s a scheme that we knew was gonna be tough. You know, kind of talking throughout the press conference on Tuesday, we said they’re gonna kind of be a little bit all over the place — (being) aggressive and blitz you and all that stuff,” head coach Jake Spavital said. “And we knew that we’d get hit with some plays, but we can have some explosive plays. And I thought that’s what happened with the offense in the first half. You know, I thought they played well (and) played tough. When we got out in the second half I didn’t think we played with that edge. We were moving a lot of bodies and we’re trying to save some guys, but that’s not the expectation we have.

“It’s not okay when he can’t move the ball like that, even though we’re playing a lot of different guys, but we didn’t play with the edge and the passion like we did offensively in the first half and I gotta fix that. I gotta correct it and that’s sort of the third quarter stuff that we keep talking about. We gotta improve on that — we do. But you know, there’s still some guys doing some right things. So collectively, we gotta get it going.”

Texas State redshirt junior quarterback Layne Hatcher underthrew a receiver early in the game which led to an interception, but the experienced field general bounced back throughout the rest of the game. Hatcher threw for 362 yards and four touchdowns throughout the night afterward.

“Our whole deal is about showing up and playing the next play, you know, and that was our issue in the second half. They were letting the previous play and the previous drive keep seeping into the performance of the next play,” Spavital said. “I thought you know, Layne threw a pick on the first drive (and) under threw it. Then (he) came back out and we’re always about three seconds to reset — understand what happened and let’s move on and let’s fight the next play because football is a very tough game, and there’s a lot of opportunity and you just gotta keep showing up and you can’t let the previous snaps affect the current moment. I think that’s kind of where we’re at, you know, it’s just kind of like, ‘hey, we’re gonna have another opportunity (to) take advantage of,’ and that’s what we did.”

Some of the other leaders on the Bobcats’ stat sheet included senior receiver Marcell Barbee, Barbee racked up 95 yards and a touchdown with a 38-yard snag along the way. The maroon and gold also saw sophomore receiver Ashtyn Hawkins continue his stellar performance so far this season — Hawkins totaled 47 yards and a touchdown including a 34-yard chunk play.

Lincoln Pare and Calvin Hill combined for 119 yards on the ground with 27 total carries.

The Bobcat defense bowed up in their shutout against HCU’s air raid system, and saw redshirt junior linebacker Brian Holloway get in the rotation after being a key special teams piece throughout the ‘Cats’ non-conference slate.

“He brings an edge and a toughness. He ain’t afraid of anything. He came in late, you know, and he loves the game of football. He’s played a lot of football. He’s very respectful in how you handle competition, and every time he’s got his opportunity, he takes advantage of it,” Spavital said. “He doesn’t let playing time (deter him). It doesn’t bother him. He just understands that when I go out there, I gotta make the most of it. And, you know, that’s why he started off on special teams and he’s (made) great plays on special teams. And then he’s turned himself into a role that we can rely on as a linebacker so really proud of him. Because, you know, he’s a great leader. He just knows his role and he goes in there (and) he gives the best effort he possibly can.”

The Bobcats will have their hands full in their first week of Sun Belt play when they match up with James Madison (3-0) in the Dukes’ conference opener on Oct. 1. JMU erased a 28-point deficit against Appalachian State, shutting out the Mountaineers in the second half to win 32-28. Kickoff is set for 12:30 p.m. when the Bobcats face the Dukes.

“It’s a pretty fun league to watch because everybody’s doing something special every single week. Just looking at the success (Appalachian State) has had and then they unfortunately lose tonight to (James Madison) which just shows you JMU’s a really good program. I’m saying they’re one of the better ones out there,” Spavital said. “And you know, I think they’re one of the wealthiest schools in our conference and they’ve invested in it. And they’ve got a fan base with passion, it’s a great addition.

“It’s gonna be one of those leagues that just beats each other up. Now that’s what makes it fun — like I truly believe anybody can win on Saturday. Like I think college football is all over the place right now. It just blows my mind at times…that’s why you got to continuously get better every single day and you got to keep addressing issues, you know, because you never know what’s going to happen.”