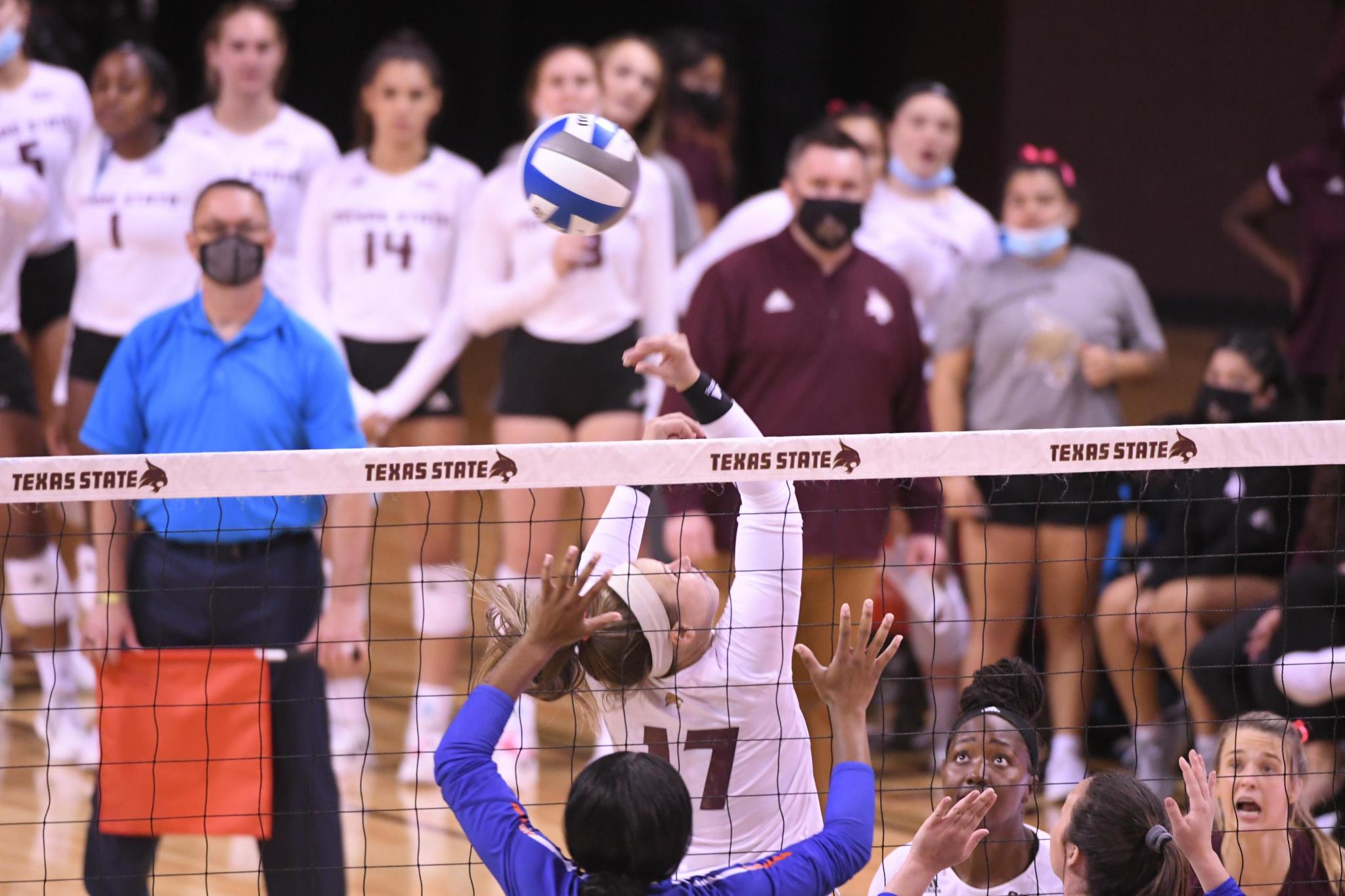 Texas State senior setter Emily DeWalt (No. 17) and the Bobcats had a 14-match winning streak ended by South Alabama in the final round of the Sun Belt tournament on Sunday. Daily Record photo by Gerald Castillo

Playing 72 matches across 443 days caught up to Texas State at the most inopportune time.

That’s the equivalent of playing one or two matches every week for over a year and two months The Bobcats only had 121 days when they weren’t in season — a relatively miniscule span of time when they weren’t focusing on wins and losses and weren’t weren’t feeling the pressure of being reigning conference champions.

The 121 days was not enough time for senior setter Emily DeWalt to receive surgery on an injured rotator cuff and return in time for the 2021 season. She opted to rest and rehabilitate it instead, still missing three weeks of non-conference play after aggravating it midseason but returning in time to earn her first-ever Sun Belt Player of the Year award and lift the Bobcats to the No. 1 seed in the West Division.

The team looked to be every bit the powerhouse through the final stretch of the year, winning 14 matches in a row including 3-0 sweeps in the second and third rounds of the conference tournament of Troy and Coastal Carolina, respectively. But in the game that mattered most, a game that would’ve crowned Texas State as league champions for a fourth consecutive season and tied the all-time record held by the 1986-89 South Florida teams, the Bobcats ran out of gas.

“I feel like we've been in a championship mode for almost 16, 17 months. That's hard,” head coach Sean Huiet said. “When you get that offseason, you get time to train your body, you get to work on some things and all the stuff you're doing helps you get ready for the season. And you get to — you don't let your mind rest a little bit, but there's no win or loss factor. It's more just about getting yourself better, getting the team better.

“Well, we've been in this championship mode for so long, that the wins and losses start to weigh on you as well. And that's just a lot. We've never had to deal with that. But, you know, no one saw a global pandemic coming at us. So it is what it is.”

Huiet is not making excuses for Texas State’s performance. He knows the team didn’t play its brand of volleyball against the Jaguars. The coaching staff tried using different lineup changes in the second set and the Bobcats took a 21-18 lead.

But South Alabama closed out the frame on a 7-2 run and Texas State couldn’t build enough energy to keep it competitive in the third.

“They were on a mission to almost make sure we didn't get a fourth championship,” Huiet said. “For some reason this season, the matchup was so different for us. We didn't match up with them well, we tried to flip it and see if we could get some different things but they just played really clean. They served well, they blocked well and we didn't respond. And again, that's probably the most frustrating part.”

While the Bobcats did not achieve going “four-for-four” in the Sun Belt tournament and didn’t reach their goal of going farther in the NCAA tournament than ever before, what the program has accomplished in the last half decade is not to be overlooked. Texas State played in the conference final in each of the past five years, a place where just two of 12 teams in the league reach annually. Fifth-year seniors Brooke Johnson and Tyeranee Scott were a part of all five, winning 20 games every season.

The maroon and gold are still set up to make it there again with just Johnson, Scott, senior libero Kayla Granado and outside hitter Kenedi Rutherford moving on and a recruiting class of four coming in. Huiet said DeWalt will have surgery on her shoulder and get it back to 100%, “or darn near close as it can be.”

But the biggest focus for this offseason — the first full-length one the team will have since the end of the 2018 season — will be to reset. The players will get to go home and enjoy a holiday break before returning to begin Huiet’s first spring training session as a head coach.

“It's awesome to be at the point where, when you don't want a championship, your kids and your staff are so disappointed,” Huiet said. “You know, winning isn't the end-all-be-all at times, but when your staff and your team is just as disappointed as you are, you know, this spring is going to come with high expectations and it's going to be really good to get in the gym and train, really work our bodies and our minds.”