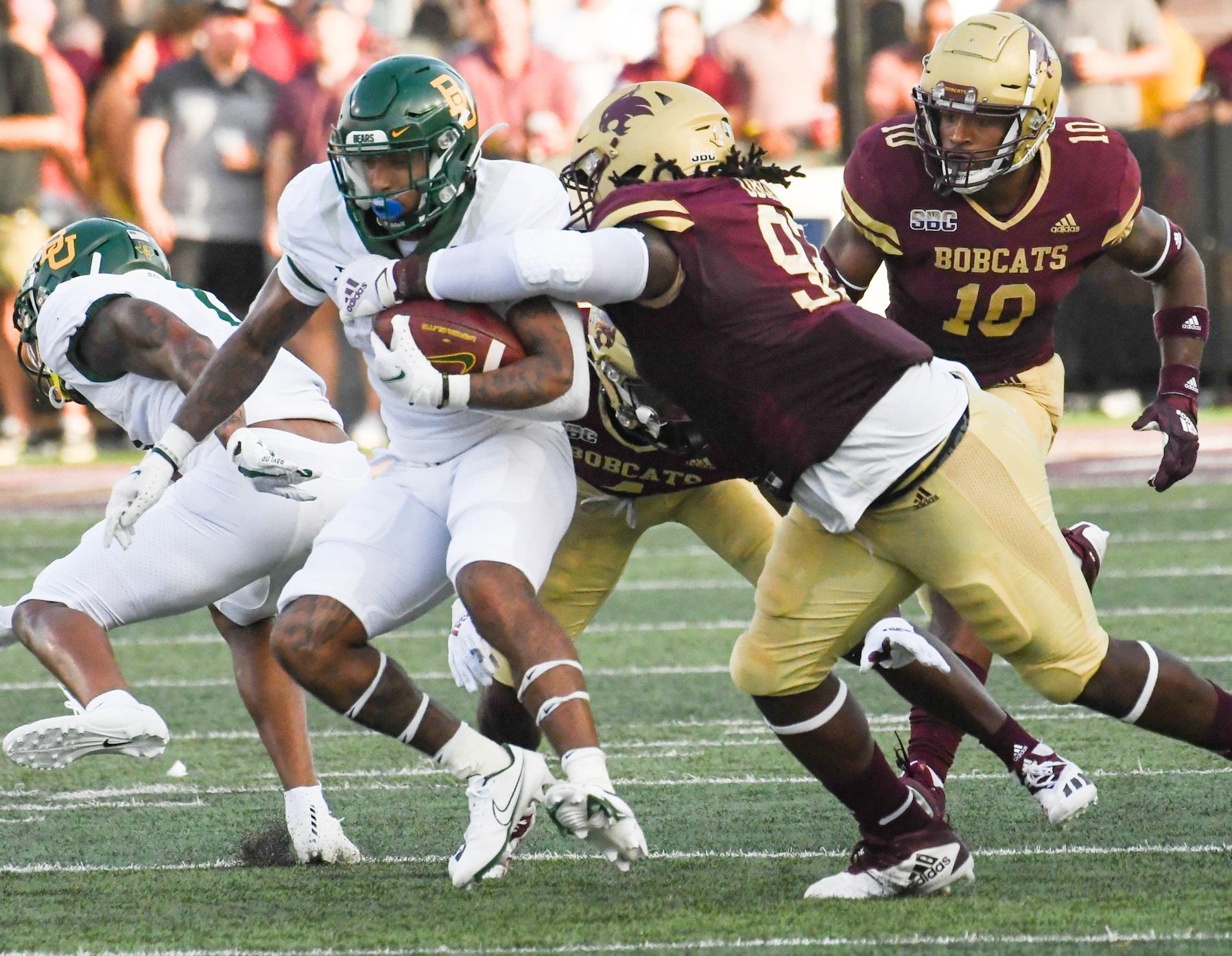 Almost a year before Texas State took a walk-off win at Florida International, the Bobcats were devastated in a similar fashion.

On Sept. 12, 2020, the maroon and gold suffered a 51-48 loss to UTSA. The team had trailed 24-7 at halftime but fought back to score 34 points in the second half and tie the game at 41-41 by the end of regulation. Texas State matched the Roadrunners’ touchdown in the first overtime period to stay in the game. But the Bobcats came up short on its next possession, failing to reach the end zone and missing a 20-yard field goal to lose the game.

That time appears to be now, as Texas State defeated FIU in overtime on Saturday in Miami, 23-17.

“I was really proud of how we stayed together tonight when things weren’t going our way,” Spavital said. “That was a good football team we beat tonight. We didn’t play complementary football all the time, but the kids did a good job of not pointing fingers and continued to play hard. That is not something we would have done last year or in 2019. We got off to hot start offensively but gave up some big plays on defense. Then, when the offense stalled, the defense stepped up and made some big plays. I am proud of how we continued to fight and stayed together as a team.”

It wasn’t a pretty win by any means. The Bobcats (1-1) took a quick lead, scoring on their opening drive. Redshirt freshman running back Calvin Hill took three carries for 38 yards to move the offense to its own 45-yard line. Redshirt sophomore quarterback Brady McBride used a draw play to gain another 17 yards on his feet. Senior tailback Caleb Twyford only gained one yard with a carry on the next play, but reeled in a 17-yard touchdown catch on a wheel route immediately after to put the visitors up 7-0.

Brady McBride hits Caleb Twyford on a wheel route for a 17-yard score on the opening drive of the game. Extra point is good#TXST 7#FIU 0
12:14 left int eh 1st@smdrsports pic.twitter.com/TTQVvDzeTF

But the team wouldn’t add another touchdown until the fourth quarter, hurt by penalties and blown-up plays that pushed the players backward. Texas State instead was buoyed by its defense, which made several big plays throughout the evening to keep FIU (1-1) off the scoreboard. At the beginning of the second quarter, the hosts marched 65 yards down the field to the maroon and gold goal line. Senior linebacker Markeveon Coleman collided with Panthers senior running back D’vonte Price and popped the ball out. Bobcats graduate defensive lineman Nick McCann came up with the fumble recovery, keeping FIU scoreless.

HUGE stop by the #TXST defense. Markeveon "Binky" Coleman forces a fumble in front of the goal line. Nick McCann fall on it for the recover. Bobcats keep #FIU scoreless @smdrsports pic.twitter.com/6yURvh8CLk

Redshirt sophomore kicker Seth Keller connected on a 48-yard field goal later in the period, tying his career-high distance and extending the visitors’ lead to 10-0. But the Panthers scored touchdowns in their last possession of the first half and their first possession of the second to jump in front, 14-10. The hosts earned their final points of the night late in the third quarter on an 18-yard field goal.

However, Price fumbled the ball again on FIU’s next possession, forced by freshman safety Zion Childress and recovered by senior cornerback Michael LoVett III. Texas State’s offense built on the momentum, using a 10-play, 62-yard drive to tie the game up, punctuated by a 1-yard dive across the goal line by sophomore running back Brock Sturges.

“The defense won the game for us,” Spavital said. “They forced three turnovers and gave us the ball in overtime just needing to kick a field goal to win. I was pleased that we were able to punch it in.”

Neither team got into scoring range in the final 10 minutes of the game, sending it into overtime for the third time in Spavital’s tenure. The Bobcats won the coin toss and chose to play defense first.

The Panthers picked up 10 yards in two plays, but were held to 3rd and 8 on its next set of downs. FIU redshirt quarterback Max Bortenschlager dropped back to pass on the next play, but was sacked from behind by freshman linebacker Issiah Nixon and lost the ball, which was recovered by senior defensive lineman Caeveon Patton.

Texas State handed the ball off to Sturges twice, who cashed in for the full 25 yards and game-winning touchdown.

Brock Sturges dives over the middle to punch in the score from a yard out. Extra point is good and the Bobcats tie it up#TXST 17#FIU 17
10:09 left int he 4th@smdrsports pic.twitter.com/1GqXhDv0as

“I have been emphasizing the running game to take some pressure off of Brady,” Spavital said. “We need to make some plays for him. But it was good that we were able to establish a running game some tonight.”

McBride finished the game completing 18-of-31 passes for 165 yards and one TD and ran for a career-high 53 yards on 13 carries. Junior wide receiver Marcell Barbee was his top target, catching eight balls for 67 yards. Hill led the backfield with 72 yards on 14 carries. Sturges chipped in another 43 yards and two scores on nine rushes.

Coleman and Childress tied for a team-high eight tackles each. The Bobcats broke up six passes in the game, with senior cornerback D.C. Williams deflecting the most with two. Nixon’s sack was the first of the season for the maroon and gold.

Heading into Saturday’s game, the Bobcats were 3-10 in games decided by 10 points or less under Spavital. They also hadn’t won a non-conference game on the road since the head coach made the move to San Marcos.

Now, Spavital might have Texas State turning a corner. The team has a chance to go on its first win streak since 2019 when it hosts Incarnate Word (1-1) next Saturday inside Bobcat Stadium at 6 p.m.