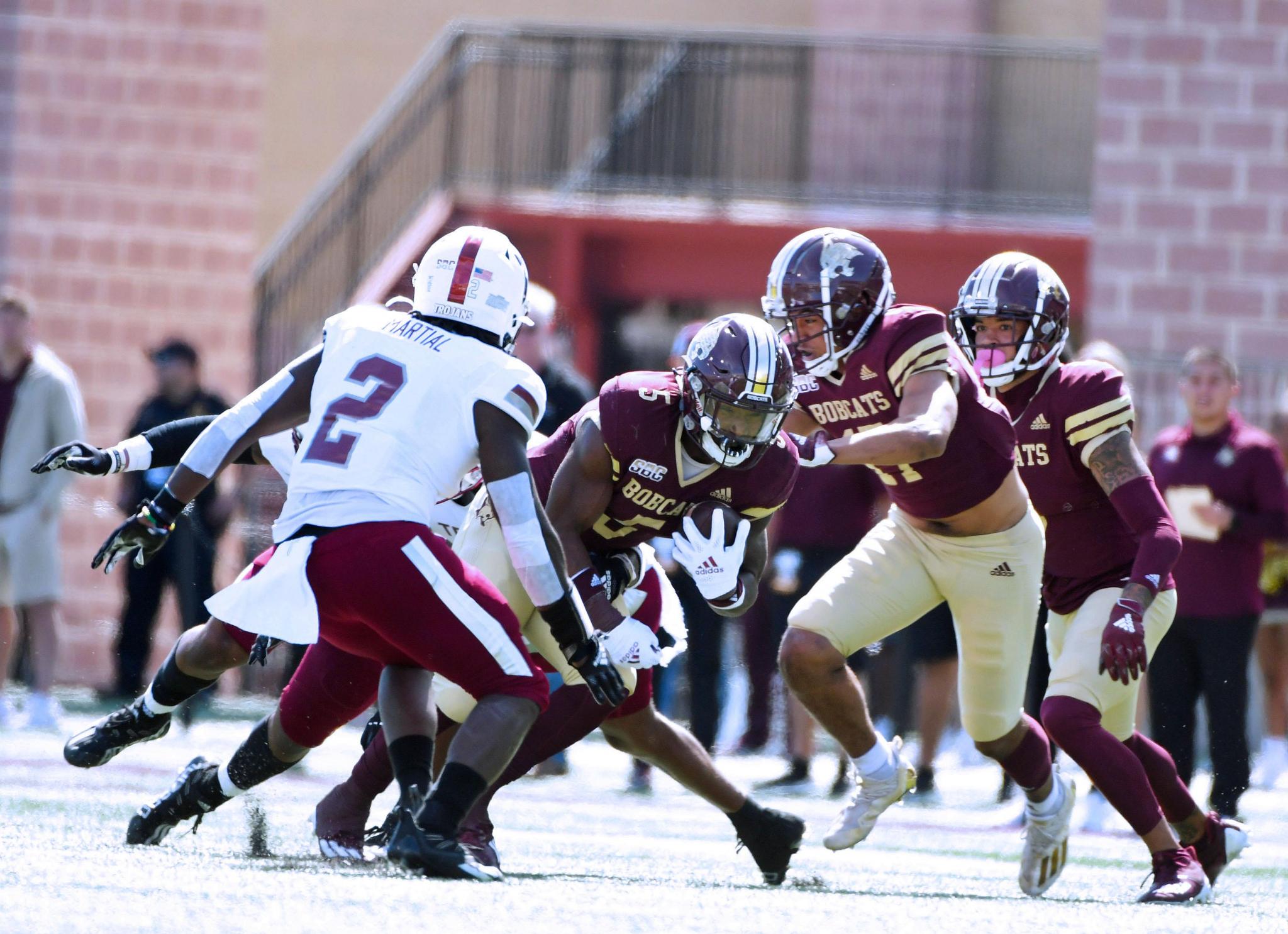 Brady McBride was having one of the best games of his career until he wasn’t.

Troy picked off the redshirt sophomore quarterback three times in the final minutes of Saturday’s game inside Bobcat Stadium, coming from behind to steal a 31-28 win over Texas State.

“I know Brady's hurt right now with that,” head coach Jake Spavital said. “Brady's going to take the blame. You know, that's how he is. But there's a lot of things that go into each play.”

The Trojans (4-3, 2-1 Sun Belt) boasted one of the top-performing defensive lines in the FBS entering the game, ranking No. 1 in the nation in both sacks and tackles for a loss per game. They overwhelmed the Bobcats (2-4, 1-1) on the opening drive of Saturday's matchup, sacking McBride three times — though, one was erased by a hands to the face penalty.

But the offense settled in and began delivering. Sophomore running back Brock Sturges gained steam running the ball and got the hosts on the board with a 2-yard touchdown rush late in the first quarter. Two plays into the maroon and gold’s next drive, McBride launched a 75-yard bomb to junior wide receiver Javen Banks, who reached the end zone to cut the deficit to 17-14.

This might be @_bradymcbride_'s best throw of the season. It's also tied for @JavenBanks1's second-longest catch for his career -- he had a 77-yarder against Nicholls State in 2019 and a 75-yarder against App State last year @smdrsports https://t.co/ByzUwQ1C6j pic.twitter.com/2LY25oEV1W

Texas State starting center Charles Fletcher exited the game late in the second quarter with a left knee injury, but the offensive line still held up with sophomore Silas Robinson filling in, only allowing two more sacks the rest of the way.

“Silas stepped up, he did a good job,” senior offensive lineman Liam Dobson said. “Initial view, you know, (we did) pretty well. We put up some points, we moved the ball.

“It's always tough when you're in a position to win and you don't come out on the other side.”

Robinson did err in the third quarter with a bad snap that was fumbled by the Bobcats and recovered by the Trojans, leading to Troy extending the lead, 24-14. But McBride helped the hosts stay in it, completing three throws for 48 yards on the next drive, running for another 16 and finishing it off with a two-yard score to sophomore wideout Ashtyn Hawkins.

Junior kicker Jacob Bates pulled off an onside kick to get Texas State the ball back. McBride fired another touchdown throw, his third of the day, to junior wide receiver Trevis Graham Jr. for 21 yards, giving the Bobcats their first lead of the game at 28-24.

The maroon and gold defense didn’t allow a score after the 6:19 mark of the third quarter.

“That defense played hard,” Spavital said. “They played well enough to win the game. You know, on offense, we've got to get better.”

McBride was picked off on each of the offense’s next three series. His second interception was returned 33 yards to the end zone by redshirt freshman safety Keyshawn Swanson, putting the Trojans back in front, 31-28. His third allowed Troy to run out the final 6:26 on the clock, clinching the win.

“This is a disappointing loss,” Spavital said. “The message has been, over the past few weeks, it's just about our execution. You know, we've got to be able to finish a game like that. And it's just like the simple, routine plays. We make a lot of great plays out there, and you guys see that, and then we're competitive in every game. But when it gets down to the critical moments, we've got to be cleaner with our execution.”

McBride finished the game completing 22-of-31 passes for 279 yards with three touchdowns and three interceptions. Banks was his top target with four catches for 96 yards and a touchdown. Sturges led the backfield with 49 yards and a score on 11 carries.

Senior linebacker Sione Tupou had a team-high 11 tackles, followed by senior safety Troy Lefeged Jr. with 10, including one for a loss. Junior cornerback Kordell Rodgers broke up a pair of passes. Senior defensive linemen Caeveon Patton and Nick McCann teamed up for the Bobcats’ only sack of the night.

While it’s the closest Texas State has come to beating Troy since joining the Sun Belt in 2013, it’s the seventh consecutive time the Trojans have walked away victorious.

Now halfway through the season, the Bobcats path to bowl eligibility becomes much more difficult, playing just two of their final six games at home. Two of their remaining road games are against the reigning conference co-champions in Louisiana and Coastal Carolina.

A win Saturday would’ve highlighted the progress that Spavital and the program have made since he took over in 2019. Instead, the team will head to Atlanta to play Georgia State (2-4, 1-1) at 1 p.m. next Saturday back at square one, wondering again where it went wrong.

“There's still a lot of positivity that you can take from that game,” Spavital said. “But like, (the players) hurt inside right now like I'm hurt right now.”